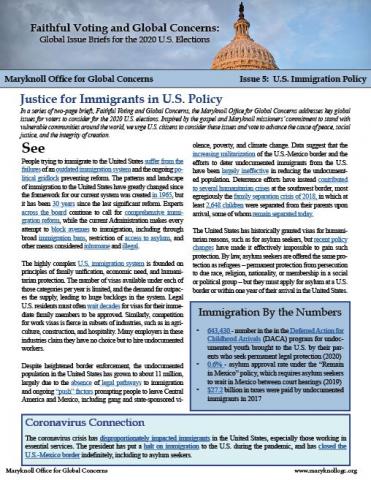 This is a abbreviated version of the issue brief on immigration as part our election briefs series, Faithful Voting and Global Concerns. View the entire brief here. The following article was published in the July-August  2020 issue of NewsNotes.

People trying to immigrate to the United States suffer from the failures of an outdated immigration system and the ongoing political gridlock preventing reform. The patterns and landscape of immigration to the United States have greatly changed since  the framework for our current system was created in 1965, but it has been 30 years since the last significant reform. Experts across the board continue to call for comprehensive immigration reform, while the current Administration makes every attempt to block avenues to immigration, including through broad immigration bans, restriction of access to asylum, and other means considered inhumane and illegal.

The highly complex U.S. immigration system is founded on principles of family unification, economic need, and humanitarian protection. The number of visas available under each of those categories per year is limited, and the demand far outpaces the supply, leading to huge backlogs in the system. Legal U.S. residents must often wait decades for visas for their immediate family members to be approved. Similarly, competition for work visas is fierce in subsets of industries, such as in agriculture, construction, and hospitality. Many employers in these industries claim they have no choice but to hire undocumented workers.

Despite heightened border enforcement, the undocumented population in the United States has grown to about 11 million, largely due to the absence of legal pathways to immigration and ongoing “push” factors prompting people to leave Central America and Mexico, including gang and state-sponsored violence, poverty, and climate change. Data suggest that the increasing militarization of the U.S.-Mexico border and the efforts to deter undocumented immigrants from the U.S. have been largely ineffective in reducing the undocumented population. Deterrence efforts have instead contributed to several humanitarian crises at the southwest border, most  egregiously the family separation crisis of 2018, in which at least 2,648 children were separated from their parents upon arrival, some of whom remain separated today.

The United States has historically granted visas for humanitarian reasons, such as for asylum seekers, but recent policy changes have made it effectively impossible to gain such protection. By law, asylum seekers are offered the same protection as refugees – permanent protection from persecution to due race, religion, nationality, or membership in a social or political group – but they must apply for asylum at a U.S. border or within one year of their arrival in the United States.

The U.S. Conference of Catholic Bishops (USCCB) has a long history of advocating on behalf of immigrants and in favor of just, comprehensive immigration reform, motivated particularly by the large percentage of U.S. Catholics who are, and historically have been, immigrants.

The USCCB explains that, according to Catholic social teaching, while nations have a right to enforce their laws and borders, the duty of Christians to “welcome the foreigner out of charity and respect for the human person” is paramount. Any efforts to enforce the law must respect the dignity of migrants, the importance of family unity, and the right of persons to migrate when they are unable to support themselves or their families at home. Catholic social teaching also asserts the duty of wealthy nations to accommodate migration flows.

In addition, Pope Francis and theologians of migration remind us of our duty to “welcome the stranger” and that the experience of being strangers in a foreign land is deeply woven into the history of our faith. Pope Francis explains that in the migrant we are called to see the face of Christ.

We can call upon our candidates to include the following positions in their platforms:
•    Expand access to the legal immigration system, most urgently for long-term undocumented U.S. residents, especially DACA recipients
•    Restore and strengthen systems for the fair processing of asylum seekers and protect their human rights and dignity during the process
•    Establish a humane immigration enforcement system, including by investing in alternatives to detention and prioritizing family unity
•    Revitalize U.S. contributions to  addressing the root causes of migration in impoverished and struggling nations