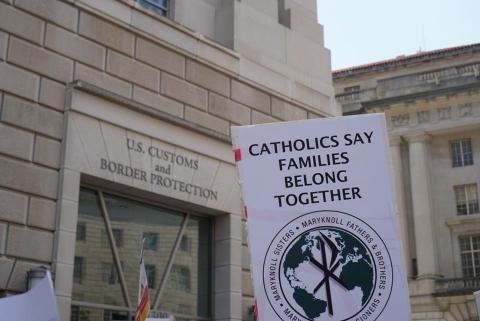 Since early May, Maryknoll missioners along the U.S.-Mexico border and the Maryknoll Office for Global Concerns in Washington, D.C. have taken action to end family separation and protect the rights of asylum seekers. The following article was published in the July-August 2018 issue of NewsNotes.

When the Trump administration enacted a “zero tolerance” immigration policy on May 4, the Maryknoll Office for Global Concerns responded by issuing a statement that began:

“In the strongest possible terms, the Maryknoll Office of Global Concerns denounces the new ‘zero-tolerance’ immigration policies enacted by the United States on May 4, including the criminal prosecution of anyone who crosses the U.S.-Mexico border illegally and the unnecessary breaking apart of families as a means of deterrence. Placed in context these policies illustrate the next steps the United States has taken down an already dark path – a path clouded by fear and distorted ideologies that violate our core values and further diminish the United States’ role as a world leader.”

Our statement went on to say: “To criminalize those who come seeking asylum, to escalate their trauma in terms of detention and confinement, and to routinely separate children from their parents is extreme, inhumane and contrary to our core Christian values to welcome the stranger and safeguard the sanctity of the family. We call on the United States to eliminate these unjust policies immediately and to regulate its borders with justice and mercy.” … Read the full statement

That same day, we created an action alert, “Take action to stop family separation,” to enable our supporters to contact their Members of Congress and urge them to use their oversight capabilities to stop the Department of Homeland Security from separating families.

As the days passed and news spread about the numbers of immigrant families being separated – more than 2,300 children separated from their parents since early May – and more families seeking asylum being turned away by U.S Border Patrol along the U.S.-Mexico border, we issued two more action alerts. First, we invited people to join “Families Belong Together” actions, including attending rallies on June 30 and calling and writing Congress to support the “Keep Families Together Act.”

Soon after that, we shared an action alert from the U.S. Catholic Bishops’ Justice for Immigrants Campaign which asked supporters to urge their Members of Congress to vote No on two harmful immigration bills. Both bills failed to pass in the House.

The U.S. Catholic Bishops have led the faith community in denouncing the “zero tolerance” policy and the family separations it has caused as “immoral” and warning that it could signify the “hardening of the American heart.” Their strongly worded rejection of policies causing migrant families to be separated and tightening asylum criteria was quickly endorsed by Pope Francis who said in an interview with Reuters news agency that was published on June 20, "I am on the side of the bishops' conference."

Throughout the month of May and June we have also shared prayers: Prayer for Migrants and Refugees from Catholic Relief Services, and Prayer for Families at the Border from the Center of Concern.

We also have joined demonstrations and public prayer vigils at the White House, Department of Justice, Immigration and Customs Protection (ICE), and U.S. Capitol Building. One of particular note occurred on June 28: The "End Family Detention: Women Take Action" march and mass nonviolent civil disobedience at the U.S. Capitol. More than 600 women were arrested, including Susan Gunn, Communications Manager of the Maryknoll Office for Global Concerns. Read her account of the day in the article "Women act to end family separation"

While Catholic voices reached the halls of power in Washington, D.C., and rose prophetically in the national discourse, Maryknoll Sisters along the U.S.-Mexico border were steadfastly bearing witness to and speaking out against the “zero-tolerance” system and serving migrants caught in its gears.

“Just too awful to believe … and, yet, it’s happening,” wrote Sister Lil Mattingly in a breathless, emotional email from El Paso, Texas, one of the centers of the crisis. “The saddest is how the children are taken from the parents, of course!” Mattingly wrote. “Who could believe such cruelty?”

Public outcry forced President Trump to reverse course on June 20 and issue an executive order to detain families together – another problem altogether. The U.S. government still has not shared a clear plan for reuniting the thousands of children already separated from their parents.

“Thank God for the outcry, the outrage, the protests, and for the persons who are hearing, feeling the pain, even Congresspersons finally trying to reach Trump/Sessions,” Mattingly wrote. “There have been marches and rallies like 3-4 times or more a week here,” she said, describing a recent March to the “tent city” for children in Tornillo, an hour from El Paso. “Another march yesterday downtown, seems like marches every day, to the courthouses, etc.”

Be sure to read Life under 'zero tolerance' – Maryknoll Sister Ann Hayden reports on the crisis of U.S immigration policy from Peñitas, a small, rural border town in deep south Texas, fourteen miles west of the city of McAllen, site of the largest immigration processing center in the United States where currently thousands of undocumented adults and immigrant children separated from their parents by U.S. Border Patrol are detained.

The policies got personal, Sr. Mattingly said. She and Maryknoll Sr. Maggie Sierra have for months been visiting a 63-year-old Honduran grandmother in immigration detention in El Paso, serving an 18-month sentence for illegal entry. Mattingly said the woman was “snatched from her bed” by agents at 3 a.m. on June 22. “We don’t know how and when she will be returned to Honduras, her daughter and family crying in Houston,” Mattingly wrote. “ICE needs beds for others they are bringing in.”

Likewise, Sr. Sierra told stories of other women whose children had been taken away from them, including one who “lost her mind” and began hallucinating in her grief.

Often lost in the din of media coverage is a second de facto policy created when Attorney General Jeff Sessions, overturned years of immigration case law and removed fear of domestic and gang violence as legitimate reasons for asylum. This single legal decision makes it extremely improbable that Central American asylum seekers can win or even have their cases heard.

Sr. Mattingly called for more attention to what drives migrants from their homes. “I think we need to keep returning to the roots of migration, reminding folks to tell Congress to stop supporting the dictator in Honduras, and to stop militarizing countries like El Salvador and Guatemala in the name of the ‘Drug War’, to stop sending guns to Central and Latin America … to stop the mining companies and others robbing the land and resources, impoverishing, contaminating their lands ….”

Sign up to receive action alerts from the Maryknoll Office for Global Concerns.

Read and share “Between a Wall and a Dangerous Place,” a new 48-page report by the Latin American Working Group to learn the root causes of migration from Central America – the violence, corruption, and impunity that forces individuals to leave their homes in Central America.
http://bit.ly/LAWGReport