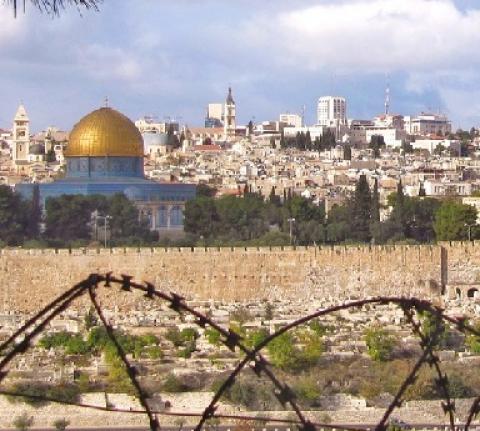 On June 4-6, 2017, the Maryknoll Office for Global Concerns joined an advocacy event organized by Churches for Middle East Peace entitled “50 Years Too Long,” to mark 50 years since the Six Day War and the beginning of Israel’s military occupation of Palestinian territories. Participants heard from various speakers on the conflict and ended the event by meeting with their congressional offices. As part of that event an ecumenical letter, signed by the leaders of twenty different Christian denominations and organizations, was sent to President Trump asking him to work for peace and an end to the occupation.

Read the PDF version of the letter.

The letter to President Trump and the signatories are below:

As faith leaders in the United States, we are encouraged by the pledge you made on May 3, 2017 at the White House toward supporting a peace for Palestinians and Israelis “that allows both peoples to live, worship, and thrive and  prosper.”  Earlier this year, you expressed your intention to “work toward a peace agreement between Israel and the Palestinians” during meetings with both Israeli Prime Minister Benjamin Netanyahu and Palestinian President Mahmoud Abbas.

Israel has struggled for both recognition and security since its founding. This June 2017 marks 50 years since the beginning of Israel’s military occupation of Palestinian lands, an occupation that harms both peoples. We hope you will work to end this occupation that has gone on far too long: 50 Years Too Long.

During this 50th year, we acknowledge that while peace is the only way forward, many do not believe peace is possible. Ongoing settlement expansion combined with violence and incitement by both Palestinians and Israelis have resulted in fear and mistrust. Despite violating international law and  Article 49 of the Fourth Geneva Convention, settlements continue to grow at an alarming rate. The Israeli government's recent announcement on March 30, 2017 to build yet another settlement in the West Bank is seriously troubling. We call on the U.S government to oppose such efforts. Settlement expansion directly undermines both the potential for a flourishing Palestinian state and a secure Israel. With each new settlement, the threat of violence increases, Palestinians face the loss of their land needed for a future state, and the prospects for a negotiated resolution to the conflict become more tenuous.

As Christians, we look to the Bible for guidance. Chapter 25 of Leviticus calls on us to mark the 50th year as the Jubilee Year - a year to “proclaim liberty throughout the land to all its inhabitants.” Jesus also references this passage when he announces the proclamation “to let the oppressed go free, to proclaim the year of the Lord’s favor.” (Luke 4) We hope and pray that both Israelis and Palestinians will be liberated from the cycles of violence that have scarred both peoples.

Mr. President, we ask you to take the necessary steps to make this year a true jubilee year and work toward a just and durable solution that advances security, human rights, and self-determination for Israelis and Palestinians. These steps should include upholding longstanding U.S. policy that recognizes Israeli settlements as illegal and an impediment to peace while ensuring accountability for policies about settlements that disregard legal restraints and international consensus. We call on your administration to promote a shared Jerusalem by Palestinians and Israelis, as well as full access to the Holy Sites of the three religious traditions - Jews, Muslims and Christians - who call them holy.

We pray and hope for a negotiated resolution to the conflict. In this 50th year of occupation, we ask your administration to do more than just seek an end to conflict. Through the confiscation and destruction of viable agricultural lands, deindustrialization, and restriction of movement, the occupation has placed a stranglehold on the Palestinian economy.  Trade is an essential component of a stable economy and without it poverty, unemployment, food shortages, and medical crises will continue to destroy the livelihoods and safety of Palestinians which in turn contributes to instability and violence that harms Israelis.

Mr. President, we encourage you to support development and humanitarian assistance that will promote human dignity, especially in the West Bank and Gaza, including access and protection for aid agencies and others.  This year, there are more than 2 million people in Gaza and the West Bank in dire need of humanitarian assistance -- nearly one out of every two Palestinians.

Mr. President, we Christian leaders continue to choose hope and call for a just peace for both peoples and an end to the occupation. We will support your efforts to build a peace between Israelis and Palestinians “that allows both peoples to live, worship, and thrive and prosper.” It is possible in this 50th year to move from occupation toward jubilee and realize the vision of two viable states, Israel and Palestine, living side-by-side in peace within secure and recognized borders.

The Most Rev. Michael B. Curry
Presiding Bishop and Primate
The Episcopal Church

Rev. David Steele
General Secretary
Church of the the Brethren