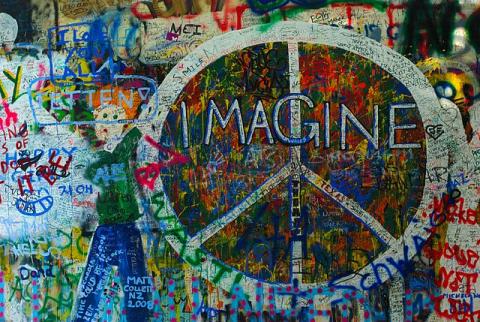 The following piece appeared in the March-April 2015 NewsNotes.

In December 2014, Pope Francis wrote to the Vienna Conference on the Humanitarian Impact of Nuclear Weapons, "I am convinced that the desire for peace and fraternity planted deep in the human heart will bear fruit in concrete ways to ensure that nuclear weapons are banned once and for all, to the benefit of our common home."

During the same conference, the Holy See contributed a paper entitled Nuclear Disarmament: Time for Abolition, which presents a compelling argument to move beyond limits set by political realism. "Now is the time to affirm not only the immorality of the use of nuclear weapons, but the immorality of their possession, thereby clearing the road to nuclear abolition. ... The fear that drives the reluctance to disarm must be replaced by a spirit of solidarity that binds humanity to achieve the global common good of which peace is the fullest expression."

2015 presents an important opportunity to advance the nuclear disarmament agenda. This year marks the 70th anniversary of the first use of nuclear weapons in war, when the U.S. bombed Japan. Also, from April 27-May 22, the Review Conference of the Parties to the Treaty on the Non-Proliferation of Nuclear Weapons (NPT) will be held in New York to assess whether treaty obligations are being met. The Marshall Islands, in lawsuits against the nations that possess nuclear weapons, claims they have failed to honor their NPT obligations to disarm. Non-nuclear weapons states are making clear their deep concern about the global humanitarian and ecological impact of an intentional or accidental nuclear exchange, as well as their impatience with the slow pace of bilateral nuclear disarmament negotiations.

Over 16,000 nuclear weapons exist in the world today. A single nuclear bomb detonated over a large city could kill millions of people. Nuclear weapons are unique in their destructive power and the threat they pose to the environment and human survival. They release such vast amounts of energy in the form of blast, heat and radiation that no adequate humanitarian response is possible. Even if a nuclear weapon were never again exploded over a city, there are intolerable effects from the production, testing and deployment of nuclear arsenals.

Since 2010 the catastrophic humanitarian impact of nuclear weapons has featured prominently in discussions among governments and civil society organizations on ways to advance nuclear disarmament. This discourse on the harm that nuclear weapons cause to people, societies and the environment underscores the urgency of concerted action for the complete prohibition and elimination of such weapons. Three intergovernmental conferences have been held to elaborate on the humanitarian impact of nuclear weapons, in Norway, Mexico and Austria. At the third conference, the Austrian government pledged "to fill the legal gap for the prohibition and elimination of nuclear weapons." Other countries have joined the Austrian pledge.

Nuclear weapons are the only weapons of mass destruction not yet prohibited by an international convention, even though they have the greatest destructive capacity of all weapons. A global ban on nuclear weapons is long overdue and can be achieved in the near future with enough public pressure and political leadership.

In the last several years, a growing body of literature has emerged detailing accidents and incidents where nuclear weapons were almost used. Despite this growing recognition and understanding of the risk of a nuclear weapons detonation, nuclear-armed states and those in military alliances with them continue to rely upon nuclear weapons.

International law obliges all nations to pursue in good faith and conclude negotiations for nuclear disarmament. However, the nuclear-armed nations have so far failed to present a clear road map to a nuclear-weapons-free world; they spend in excess of US$105 billion each year maintaining and modernizing their arsenals, diverting funds from health care, education, disaster relief and other services, with the apparent intention of retaining these weapons for many decades to come.

A nuclear weapons ban would globalize what nuclear-weapons-free zone treaties have done in Latin America, Africa, the Pacific, central and southeast Asia. It would allow all nations to formalize their rejection of nuclear weapons and help create international legal norms against the possession, use, stockpiling, deployment and assistance with all aspects of nuclear weapons.

Send a copy of Nuclear Disarmament: Time for Abolition to your elected officials. Urge them to insist that the U.S. honor its NPT treaty obligations regarding nuclear disarmament and to support the start of negotiations on a treaty banning nuclear weapons.

Photo of Lennon peace wall in Prague by Adam Zivner