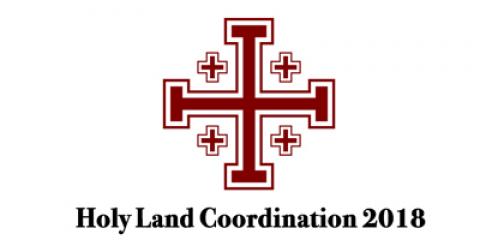 Marie Dennis, co-president of Pax Christi International, joined representatives of Catholic bishops' conferences from several countries, including the United States, on their annual solidarity visit to the Holy Land January 13 – 18, 2018. They visited Gaza, met with school children there and in the West Bank and in Israel as well as with students at Hebrew University and Bethlehem University. They also visited l'Arche in Bethlehem and a home of the elderly in Beit Emmaus. The names of the bishops in attendance and their joint final statement are available on the U.S. Conference of Catholic Bishops (USCCB) website. The following remarks were written by Marie Dennis upon her return to the United States.

The situation in Palestine and Israel is worse than it has been in years. The U.S. decision to move its embassy to Jerusalem signaled a paradigm shift but no one seems to know what will happen now and drastic cuts to U.S. funding for UNRWA are likely to have a disastrous effect at a grassroots level. Israeli actions have pretty much precluded the two-state solution. Some think that if the two-state solution seemed at all possible, Palestinians would still favor that, but at this point it is completely moribund.

In a private meeting, Patriarch emeritus Michel Sabbah, former president of Pax Christi International, emphasized the obvious fact that security will only come to Israel if it is surrounded by friends, not enemies. He feels real sorrow for the Israeli people. The U.S. needs to radically change the direction of its policies to promote friendship among nations in the Middle East. He agreed that the people of Palestine see little hope or future, but reminded me that God is full of surprises

The focus of this visit to Israel and Palestine was on “Young people and education – a way to peace and justice.”

We began with a very brief visit to Gaza, primarily to Holy Family parish where we spent time with the pastor, representatives of CRS and a number of young adults from the parish. Father Mario spoke as he did last year about the diminishing number of Christians in Gaza. There are fewer than 150 Catholics in Gaza and about 1100 Christians. The focus of his work is on programs for youth. Unemployment in Gaza is between 45 and 48%; it is over 65% among Christians. The situation in Gaza remains dire. Almost nothing has changed with the Hamas-Fatah agreement, except that the entry process into Gaza is slightly easier with only two checkpoints (the Hamas checkpoint is gone). The youth of Gaza have lived through 3 wars and have seen no improvement in the situation, thanks to the occupation, but also to the conflict between the Palestinian Authority and Hamas. Few young people are willing to stay; their frustration/anger was palpable. A number of the Christian youth we met included in their criticism Christian foreign aid agencies that are creating jobs in Gaza but not giving preferential treatment to Christian applicants for those jobs.

The following days we met with students and educators in the West Bank and in Israel. We had multiple conversations in small groups with youth of all ages. In Beit Jala and Beit Sahour, the sense of hopelessness among articulate, thoughtful young teenagers was palpable.

The law students at Hebrew University with whom we spoke were studying human rights and multiculturalism. They were clearly committed to promoting the human rights of women, of Ethiopian Jews, of LGBT persons, but they did not speak about the basic rights of Palestinians or about more than individual rights. On the one hand, they did not want the current conflict with Palestinians to continue, but they also expressed concern about losing their “Jewish state.” We had another conversation with young people preparing to enter the Israeli Defense Forces. Like the law students they had chosen to participate in programs that promoted respect for different religions and diversity, but any prospect for such programs to have an impact on the present situation is very long term.

We also met with two young members of the Parents Circle Family Forum, a Palestinian whose sister was killed by Israelis and an Israeli whose sister was killed by a Palestinian suicide bomber. Their personal stories were very powerful, including the fact that both sets of parents – especially the fathers – had chosen not to hate and had taught that to their sons, even in extremely difficult circumstances. The Palestinian’s father had spent seven years in prison for flying a Palestinian flag at his school. They were very clear that the deaths in their families and in other families were the result of political decisions. The context of occupation manufactures death. The Israeli said that schools taught him to be afraid. The Israeli parents were anti-occupation activists. He, as a Jew and a descendant of an Auschwitz survivor, made a very strong point of saying that to criticize the crime of oppression, the occupation is not anti-Semitic. The Parents Circle Families Forum regularly demonstrates against the occupation.

On the last day of the Holy Land Coordination we visited the Notre Dame Centre for Emmaus and the Bethlehem University Nursing Program, both in Qubeibeh, one of three villages that claims to be Emmaus. Qubeibeh and the surrounding 10 villages of the Biddu enclave are completely surrounded by the Israeli separation barrier. There is only one road leading to the village, passing through a 1km long tunnel, under a settlement area. From Qubeibeh, which is very high, you can sometimes see the Mediterranean, but people have no way to get there. The resulting situation of extreme isolation has led to marriages between cousins or near relatives and the birth of many children with special needs. The Notre Dame Centre is primarily a center for elderly women without families or whose families cannot care for them, often because they have emigrated. But the center has also taken in a number of people with special physical or mental needs, some of whom were found abandoned in caves. Education and engaging women as workers or volunteers at the center are having a positive impact on the community, which is predominantly Muslim.

Christian Brother Peter Bray, Vice Chancellor of Bethlehem University, spoke to us about the reason for the Catholic Church’s continued work in Israel and Palestine, even as the number of Christians in the Holy Land rapidly declines. “I have come that they might have life and have it to the full.” (John 10: 10) The Church, he said, has no political or economic power here, but we contribute because the words we speak about this reality are not “enemy,” “hating,” or “revenge.” With our institutions, we can say “all are welcome.” We can go out as Jesus did to take down walls and open doors. We can show that every person is loved beyond their wildest dreams by a God who is suffering with them. And we can prepare the new leaders of Palestine. Brother Peter told us about a student who said to him: They demolished my house and when we rebuilt it, they demolished it again. They have taken my house, my land, my freedom, but they cannot take my education.

Hope was thin among those we met this week in Palestine and Israel, but over and over again we were reminded by Archbishop Stephen Breslin from South African and Bishop Donal McKeown from Northern Ireland that 30 years ago no one could imagine that apartheid or “the troubles” would ever end. Few believed that East Timor would know peace and independence and no one predicted how quickly the Berlin wall would fall. We may not be able to see how, but someday the occupation will end. Hope, as hard as it is to imagine, is essential.

Perhaps some of the strong and articulate young people we met this week will claim the hope, the courage and the creativity to make that dream a reality.

Visit to Palestine and Israel with the Holy Land Coordination 2018