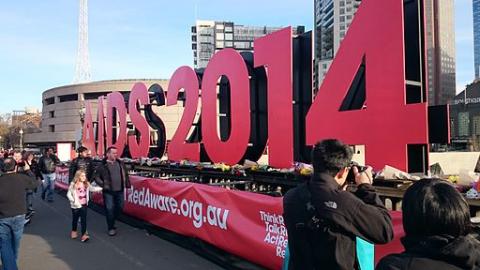 The following excerpt from a report written by Fr. Joe Fedora, MM was published in the September-October 2014 NewsNotes. Fr. Fedora lives in Lima, Peru, where he accompanies people who live with HIV and AIDS; he attended the 20th International AIDS Conference (often listed with Roman numerals, XX) held July 20-25 in Melbourne, Australia. His report in its entirety can be found in a PDF file at the bottom of this page.

Approximately 12,000 delegates participated [in the conference] – a reduction by nearly half the number present at the 2012 conference in Washington, D.C. I suspect distance along with government and NGO budget cuts played a role in the reduction. … [Fr. Fedora noted the lack of Latin American representation; only a few participants from Spanish-speaking countries were present, and, he writes, "If there was any literature or information in Spanish, I couldn’t find it."]

Some facts about the state of the HIV epidemic:

Since the beginning of the epidemic:

Many of the countries hardest hit by HIV also suffer from other serious issues, for example, infectious diseases, poverty and food insecurity.

Trends in the last decade