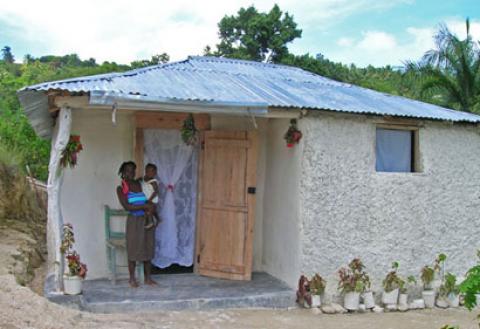 The following article appeared in the May-June 2013 issue of NewsNotes. Photo of a newly constructed (post-earthquake) home courtesy of Haitian Connection.

The following update is provided by Maryknoll Affiliate Renate Schneider who coordinates Haitian Connection, a non-profit that focuses on health and education needs in Haiti.

In Haiti, rumors abound, therefore it is nearly impossible to get a good handle on what is happening in the country, and especially in the government. A few signs are hopeful, but others are not. Some programs that the government takes pride in appear good at first glance, but when analyzed more closely, one can see that they hinder development rather than promote it.

For example, the current government has established a national social assistance program called "Ede Pep" (Help the people), which basically is a transfer of cash to people in need. In a country where 57 percent of its 10 million people exist on less than US$1 a day and 82 percent on less than US$2 a day, the cash transfer that Ede Pep provides seems like a good thing. Those who have received cash include 25,000 handicapped people and 25,000 elderly. In addition, 57,000 destitute mothers have also received cash, and 22,000 university students will receive 2,000 gourdes (US$47.62) a month to help with their educational expenses. 400,000 solidarity baskets -- containing items that can feed a family of five for 10 days -- have been delivered.

But do these one time or limited time gifts really constitute development? For example, the 2,000 gourdes that the students receive -- do they foster the development of the educational system in Haiti? First of all, the money goes directly to the students and not to the universities. Needs in Haiti are great, so it is almost certain that the money will not go solely to pay for school fees. In addition, the program will last only for a limited time. Would that money not be better spent improving elementary schools which suffer from lack of materials? Or increase the salary of teachers who are paid poorly and often not on time? The impact money thus spent could be greater than simply giving cash stipends. To a number of Haitians it seems that the government is buying the support of these sectors of the population, something they say happened under former president Francois "Papa Doc" Duvalier.

More recently, Finance Minister Marie-Carmelle Jean-Marie and Communications Minister Regine Godfroy resigned. Both are very competent women who cited a lack of support as the reason for their resignation. Jean-Marie had tried to establish transparency in her office and apparently was rebuffed in her effort. In January, Richard Morse, leader of the Haitian musical group RAM and a cousin of President Michel Martelly, resigned his position as special counsel to the president. Morse, who had accompanied Martelly during the elections and his first year in office, explained, "I left because of corruption in the palace and infrastructure sabotage." As an example he mentioned that workers filled drainage canals before the rainy season which caused flooding. They did this in order to attract aid money. Morse said he spoke to the minister, but nothing was done.

While no one can expect these practices to change from one day to the next, that they occur at the highest level of government is disturbing. What is clear is that there are people in Haiti who are not interested in development but rather profit from the lack of it. The poor road infrastructure allows the few people who control the movement of goods to set the prices for those goods. So they have little interest in a decent road infrastructure which would benefit more people but threaten their position as the ones in control.

In the beginning of this writing I also mentioned hopeful signs. Of the people living in camps since the January 2010 earthquake, 79 percent have been relocated. While the relocation process has some problems, in general this is quite an accomplishment. The airport has been rebuilt and is now a modern facility that meets international standards. In Port au Prince a number of large hotels have been constructed and are open for business. While these do not directly benefit people who are poor, they do encourage foreigners and others to visit Haiti and find a place to stay that provides a comfortable environment. Of course, while this would encourage greater business growth and help address the problem of unemployment, we hope that any such development is done in an ecologically sustainable manner, protective of water sources and the soil.

In addition, solar powered streetlights are more and more in evidence, not only in Port au Prince, but also in the provinces. In Haiti where electricity is still rationed, this means a lot. They provide a sense of security and also allow students to study under the streetlights when they have no electricity at home.

The most hopeful sign of course is the irrepressible spirit of the Haitian people who still produce vibrant art, sing songs that express their life experiences and above all stubbornly maintain their faith on God.