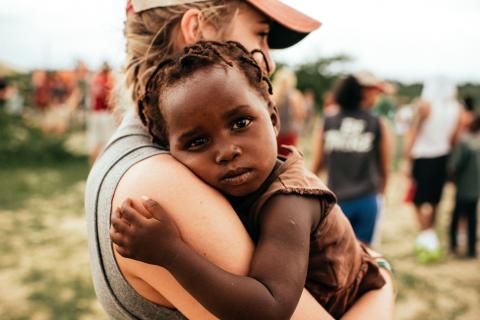 In one of his final acts as UN Secretary General, Ban Ki-moon said the United Nations was "profoundly sorry" for the outbreak in Haiti, which first developed near a UN base in 2010, and committed to mobilizing a response by UN member states. The following article was published in the January-February 2017 issue of NewsNotes.

Cholera, an infection that spreads through water contaminated by human waste, had been absent in Haiti for a century until the arrival of a United Nations peacekeeping force in 2010 after the country’s devastating earthquake. Medical studies published by the U.S. Centers for Disease Control have shown that the disease was reintroduced via infected members of the peacekeeping contingent and their faulty sanitation practices, which leached latrine sewage into the water supply.

After several years of denial, the New York Times reported in August 2016 that the Office of UN Secretary General Ban Ki-moon acknowledged the UN’s role in the outbreak for the first time. The deputy spokesperson for the secretary general, Farhan Haq, said, “over the past year the UN has become convinced that it needs to do much more regarding its own involvement in the initial outbreak and the suffering of those affected by cholera.”

Days earlier, the spokesperson for the Office of the UN Secretary General said “the Secretary-General is actively working to develop a package that would provide material assistance and support to those Haitians most directly affected by cholera,” and that the UN “intends to intensify its support to reduce and ultimately end the transmission of cholera, improve access to care and treatment, and address the longer-term issues of water, sanitation and health systems in Haiti.”

Finally, on December 2, Ban Ki-moon announced in English “On behalf of the United Nations, I want to say very clearly: We apologize to the Haitian people,” after asking for “the Haitian people’s pardon” in Creole. “We are profoundly sorry for our role.”

In the live broadcast from the U.N. headquarters in New York, during which he detailed the plan, Ban acknowledged that the powerful world body “simply did not do enough with regard to the cholera outbreak and its spread in Haiti.”

While the details of the plan are currently being worked out, the UN has announced that it is mobilizing $400 million for this new response.

The response is being divided into two tracks: First, intensifying support for cholera control and response, and more effectively addressing the medium and longer term issues of water, sanitation and health systems. Second, providing material assistance to those most affected by cholera.

It is unclear whether “material assistance” will translate into individual compensation, community-level projects, or some combination of the two.

While the progress is exciting, it is critical for advocates to maintain pressure on the Office of the UN Secretary General to uphold its promises and follow through with action.

According to the Haiti Advocacy Working Group, an organization formed by international development, faith-based, human rights and social justice organizations advocating on issues related to U.S.–Haiti policy, several things still need to happen for justice to become a reality: