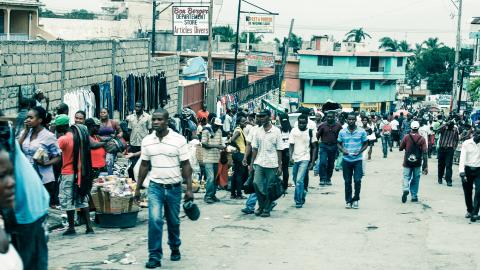 The political situation in Haiti has brought the country to the “verge of explosion.” This article was published in the March-April 2021 issue of NewsNotes.

The brewing political crisis in Haiti recently reached a boiling point when President Jovenel Moïse refused to step down from power on February 7. Many see this move by President Moïse as the latest step in the dismantling of democracy in the country which has led to chaos and violence.

President Moïse claims that because an interim government occupied power during his first year in office, his five-year term began in 2017 rather than 2016. Several prominent members of the opposition party and the Haitian judiciary dissented, citing the Haitian constitution. Nighttime arrests of 18 dissenters followed, including one Haitian Supreme Court justice. On Friday, February 5, the U.S. State Department weighed in on President Moïse’s side, a move that was criticized by many Haitians and advocates in the United States. Several U.S. Members of Congress also issued an open letter to the Biden administration calling for a condemnation of Moise’s actions and a transitional government in Haiti.

The political crisis has sent the country into chaos. In late January, a group f Haitian Catholic bishops released a statement saying that the nation was on the “verge of explosion.” Mass demonstrations led by the opposition have been met with violence by gangs, which largely operate with impunity or even under government orders. Kidnapping for ransom has become rampant in the past year, so much so that sochools have been shut down and students are reportedly organizing among themselves to collect ransom for their missing classmates.

This new wave of political instability intensifies the grave insecurity already felt by the Haitian population, 60 percent of which was living under the poverty line even before the severe economic fallout from the pandemic.

The Haitian government suffered a great blow last year when the terms of two-thirds of the national legislature expired without President Moïse setting in motion the necessary mechanisms to hold new elections. Now, only 11 elected officials hold power in Haiti, as in addition to the dissolving of the legislature, all mayors in Haiti were suspended.

Since then, Moïse has been ruling by decree and seeking to expand his constitutional power. In April, he plans to hold a referendum on a new constitution that many fear will add to his unchecked power. In a Feb. 13 statement, three top law schools in the United States which collaborate with Haitian civil society called on the United States government to refrain from supporting elections in Haiti without safeguards to ensure they are free, safe, and fair. The planned April elections will almost certainly fall short of those standards.

Amid this political crisis and the global pandemic, deportations to Haiti from the United States have continued, causing an outcry among immigrant advocacy groups. At least 600 asylum seekers from Haiti have been deported back to the country since the beginning of February. Their deportations were permitted under Title 42, a Center for Disease Control health order that allows for rapid deportations during a health crisis. President Biden’s executive order putting a 100-day moratorium on deportations does not apply to expulsions under Title 42. The Maryknoll Office for Global Concerns joined other faith-based organizations in issuing a letter calling on the Biden administration to immediately halt deportations to Haiti in light of the growing crisis in the country and the risk of COVID-19 spread in Haitian communities following the deportees’ return.

Abby Belt, a Maryknoll Lay Missioner working in a school in Gros Morne, Haiti, wrote a reflection on the growing crisis, published February 8: “A strong majority of Haitian citizens and political analysts agree that Moïse leaving is the best option. What comes next — because neither the president nor the opposition have any intention of backing down — will likely be more protests, school closings, roadblocks, violence and suffering for the Haitian people.”

“In holding on to hope in the ways we can, and as we have with every prior period of insecurity,” Abby continues, “we take it day by day. We had 12 students and only a handful of teachers show up for school today at Jesus Mary School…If you have a moment, breathe a silent prayer for all the Haitian mothers who worry over their children’s future and safety, while keeping a smiling face outward. We rise or fall together in this world, and we cannot forget one another as we press ever onward.”

Faith in action: Urge President Biden to immediately halt all deportations to Haiti during this time of crisis. http://bit.ly/3schIBK