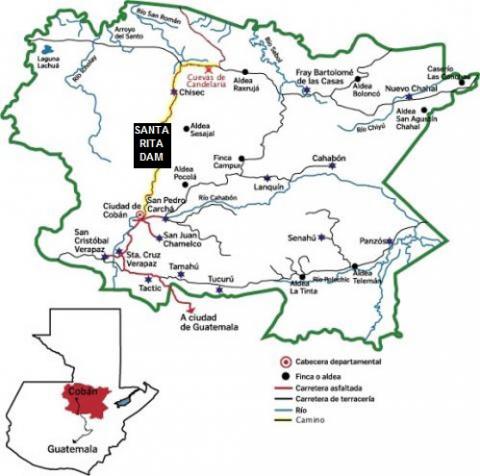 Three years after filing an official complaint, traumatized communities receive a response.The following article was published in the November-December 2017 issue of NewsNotes.

In the September 2014 NewsNotes, we reported on the displacement of 160 indigenous families by a police force of more than one thousand to construct the 23-megawatt Santa Rita dam in Alta Verapaz. Maryknoll Affiliates in Guatemala alerted us to the incident. New York-based Latin Renewables Investment Fund (LRIF), a partial owner of the dam, received financing from the International Finance Corporation (IFC) at that time. This is another example of the IFC using a “financial intermediary” to avoid scrutiny.

The communities filed an official complaint at that time with the Compliance Advisory Office (CAO), an independent grievance mechanism that rules on whether the IFC violates their lending policies. The CAO just released its findings on October 30.

The report found that the IFC failed to recognize the scope of risk of the project to human rights, biodiversity, culture and livelihoods. The CAO also found that the IFC did not do enough to ensure that LRIF conducted a proper consultation with adequate access to information and freedom to speak without fear. The IFC also did not guarantee that the project met the World Bank dam construction safety standards or the indigenous peoples policy guidelines. The IFC also failed to work sufficiently with LRIF to address rising tensions and conflicts. The CAO raised questions as to whether the IFC could provide sufficient oversight of financial intermediaries. The office will continue to monitor the project until the IFC is in compliance.

The ruling does not mean that the project will be cancelled or that the communities receive a settlement but it could improve how the project is conducted and influence future projects of its kind. Read the full report at http://bit.ly/2yl1MFZ.