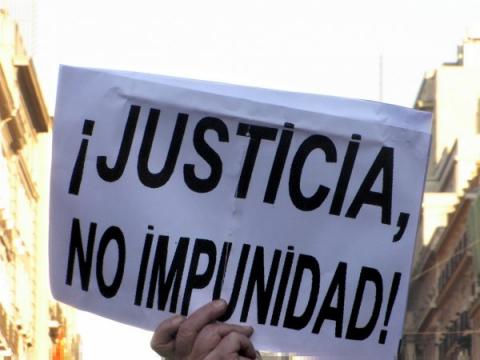 The following article was written by Eben Levey, who has served as an intern with the Maryknoll Office for Global Concerns since September 2013. It was published in the July-August 2014 NewsNotes.

As has been reported in these pages in recent years, Guatemala still struggles to come to terms with the crimes against humanity and mass killings committed during its 36-year internal armed conflict that ended with negotiated peace accords in 1996. The historic conviction for genocide of ex-president Efraín Ríos Montt in May 2013 was a brief moment in which justice broke through the entrenched barriers of impunity that continue to define Guatemalan politics. However, just 10 days after the conviction, Guatemala’s Constitutional Court overturned the conviction on obscure technical grounds and ordered a retrial to start again from the beginning.

Maryknoll missioners share reflections on Guatemala in light of Ríos Montt trial, May 2013

In the meantime, Guatemala’s powerful right wing, in reaction to the challenge to impunity, has since maneuvered to prevent another such victory for justice. In particular, the leading force in the crusade against impunity, Attorney General Claudia Paz y Paz, was forced out of office seven months before her term was due to expire. Paz y Paz had been appointed Attorney General in December 2010; her predecessor was removed from his post after only 17 days in office in June 2010 amidst widespread allegations of connections to organized crime. According to the Guatemalan Constitution, attorneys general serve terms of four years, with the possibility of re-appointment. Thus, everyone expected that Paz y Paz would serve through December 2014.

However, in February of this year, the Constitutional Court ruled that Paz y Paz would be relieved of her office in May as a result of a case brought against Paz y Paz by corporate lawyer and wealthy businessman Ricardo Sagastume. In the technical ruling, the Court agreed with Sagastume that Paz y Paz merely stepped in to fulfill the term of her predecessor rather than beginning her own term, thus cutting her time in office seven months short. As reported in The Guardian, "War criminals, corrupt officials and drug traffickers let out a collective sigh of relief in Guatemala... after another controversial ruling by the constitutional court appeared to fly in the face of justice and accountability."

Paz y Paz was, for a period of time all too brief, the symbol of hope in a country still searching for effective accountability. Human rights defenders and others deeply invested in the continuation of Paz y Paz’s strides toward justice hoped that the nominating commission made up of lawyers, law school deans, and the president of the Supreme Court would name Paz y Paz as a candidate for reappointment as they examined and graded a number of possible candidates for the position. However, although Paz y Paz received the second highest score according to the nominating commission’s rubric, they decided to exclude her name from the short list of six candidates submitted to President Otto Perez Molina, drawing concern from the international observers who had been closely watching the nominating process.

On May 17, Perez Molina replaced Paz y Paz with Thelma Esperanza Aldana Hernández, a judge who had been a member of the Guatemalan Supreme court. Aldana Hernández takes the post with zero prosecutorial experience, and news reports in Guatemala suggest that she will likely shift the focus of the office away from human rights and organized crime to focus instead on street crime. Furthermore, there are serious doubts as to whether Aldana Hernández will continue to pursue the Ríos Montt genocide trial that is due to resume in January 2015. The Center for Independent Media of Guatemala (CMI Guatemala in Spanish initials) has documented that Aldana Hernández is very closely tied to the Frente Republicano Guatemalteco (FRG), the right-wing political party founded by Ríos Montt in 1989 and currently led by Zury Ríos Montt, the ex-dictator’s daughter.

Finally, reflecting the power of genocide-deniers in Guatemalan politics, the national legislature passed a non-binding resolution on May 14 that declared that genocide never occurred during the 36-year armed conflict. The resolution directly contradicts the findings of a 1999 United Nations investigation, which concluded that genocide and human rights violations were widespread during the conflict in which roughly 80 percent of the victims were indigenous and over 600 massacres occurred in indigenous villages and regions.

In the year since Ríos Montt’s genocide conviction was overturned, Guatemala’s reactionary right has been quite successful in undoing the steps taken toward justice and accountability. The unseating of crusading Attorney General Paz y Paz, her replacement with a right-wing former judge who has indicating little willingness to continue prosecutions against human rights violators, a vicious media campaign against human rights defenders and justice advocates, and the recent genocide-denying resolution: these events over the past year indicate that Guatemala is hardly progressing in the struggle for justice. Rather, the quest for justice for the countless victims of Guatemala’s armed conflict has been besieged by a powerful right wing for whom impunity remains.