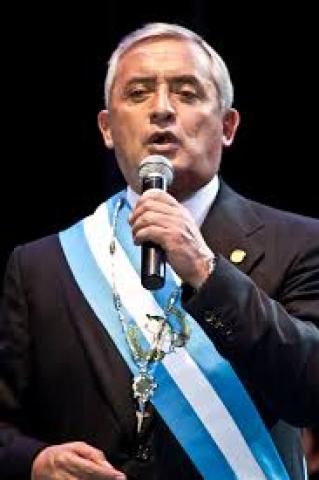 The arrest of Guatemala’s President Otto Pérez Molina (in photo) on charges of corruption on September 3 was a surprising turn of events that brings a ray of hope to a long-suffering country where Maryknoll missioners have served for decades. With the indigenous peoples whom Maryknoll has accompanied in their struggle for justice, we celebrate this historic moment brought on by months of popular protests and courageous public prosecutors. These notable events offer hope that the government-sanctioned violence, the impunity and corruption that have reigned in this beautiful country for so many years will finally give way to the rule of law and a true democracy where all Guatemalans can live in peace.

The following article is taken from the blog of NISGUA (Network in Solidarity with the People of Guatemala) and was reprinted in the September-October 2015 NewsNotes.

[On the evening of September 2] Guatemalan President Otto Pérez Molina was forced to resign after more than four months of massive popular protests throughout the country. On [September 1], Congress unanimously voted to strip Pérez Molina of his presidential immunity, after evidence provided by the public prosecutor and International Commission against Impunity in Guatemala (CICIG) directly implicated him in the customs fraud network, “La Linea.” An arrest warrant was issued for the president [on September 2] and he resigned just hours later. Pérez Molina and former Vice President Roxana Baldetti are accused of heading the criminal network that defrauded the state of at least $3.7 million.

Vice President Alejandro Maldonado, who was named to the position after Roxana Baldetti was forced to resign, assumed the presidency [on September 3]. Maldonado is the founder of a political party known for promoting organized violence and death squadrons during the 1960s and 1970s. He was also one of the Constitutional Court judges who voted to overturn the historic 2013 ruling that sentenced former de facto dictator Efraín Ríos Montt to 80 years in prison for genocide and crimes against humanity.

[On the morning of September 3], Pérez Molina appeared before Judge Miguel Gálvez to give his first declaration and hear the charges against him, which include illicit association, bribery and customs fraud. The prosecution played hours of wiretap recordings throughout the day, laying out the hierarchy of the criminal structure before revealing recordings directly implicating the president. Deemed a flight risk, Judge Gálvez ordered Pérez Molina to spend the night in custody at the Matamoros military prison. ...

Today Guatemalans celebrate this incredible victory, born of months of resistance in the streets and decades of resilience in the face of structural corruption, racism and violence. However, we know the struggle is far from over. Calls for electoral reform were recently struck down in Congress, and all signs point to elections taking place as scheduled [on September 6]. Many Guatemalans have refused to accept this decision and have continued to protest outside the elections office demanding, “In these conditions, we do not want elections!”

If the impressive show of Guatemalan people power so far is any indication, the charges officially lodged for corruption are just the beginning in the search for justice for Pérez Molina’s crimes. The former general is also implicated in the genocide against the Ixil people and his administration is responsible for the criminalization and imprisonment of hundreds of human rights defenders and repression and violence against thousands of Guatemalans defending life and dignity at La Puya encampment, in Totonicapan, San Rafael las Flores, Santa Cruz Barillas and many more.

The past four months have seen people from all walks of life take to the streets in protest in Guatemala - some for the first time and some for the hundredth. Meeting spaces have given birth to new proposals for movement building and structural change that will have impacts reaching far beyond Pérez Molina’s resignation. The value of memory has been strong over the past four months, with many references being made to the 1944 revolution and the ten years of spring. As one sign read: “WE ARE HERE...for those who dreamed and struggle for a better country.”

Update on elections: Comedian Jimmy Morales won the first round on September 6 but did not take 50 percent of the votes; it is not clear whether businessman Manuel Baldizon (previously the front runner) or former first lady Sandra Torres will face Morales in a run-off vote on October 25.