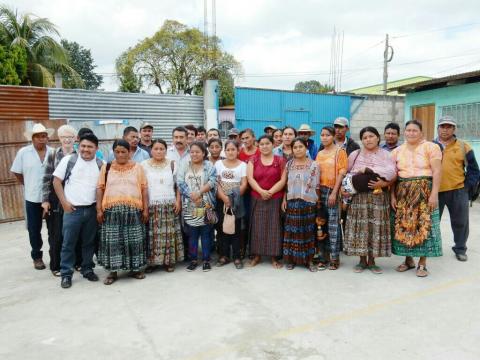 In February, Maryknoll Sister Ann Braudis joined fellow Maryknoll Sister Eva Canales in Guatemala to investigate human and land rights violations perpetrated against poor and indigenous people. The following article was writing by Sister Ann and published in the March-April 2016 issue of NewsNotes.

The investigation by Maryknoll Sisters of human and land rights violations perpetrated against poor and indigenous people of Guatemala is premised on the understanding that the Maryknoll Sisters’ future-oriented vision of “One Earth Community” requires work for environmental accountability and economic justice today. At the outset of the investigation, we hoped to see what was happening, listen to the people and express solidarity with them.

In December 2015, the U.S. Congress appropriated 750 million dollars for the Alliance for Prosperity, a plan to promote development and peace in Honduras, El Salvador and Guatemala. The aid package is intended to stem the flow of undocumented migrants and unaccompanied children from these three countries to the U.S. by improving the quality of life at home.

However, the plan neglects to answer the question: What kind of development do the people need and want? This question is of exceptional importance to the indigenous people of Guatemala, a plurinational state that claims to respect the rights of indigenous people, including the universal right to free, prior, and informed consent in the face of development projects that affect the environment and their ancestral domain.

According to Claudia Samayoa, a Maryknoll Affiliate and Guatemalan human rights advocate, there are differing understandings of development for rural Guatemala where the majority of indigenous people live:

One understanding is that people need educational centers, health centers, a justice system to process land claims and other legal issues, and credit to facilitate investment in local projects. These services are guaranteed by the constitution but due to old style politics, rural poverty and a sense of hopelessness is everywhere.

One case of human and land rights violations we investigated was located in the town of Sayaxche, el Petén, a remote area of Guatemala where Maryknoll missioners previously worked and a toxic spill from a drainage container used by the African palm oil company Reforestadora de Palma del Petén (REPSA) occurred in April. The spill contaminated the local river, on which the people there depend. All of the 23 species of fish and other river life, and animals dependent on the river, died.

In Sayaxche, we met with Saul Paau, a Guatemalan human rights activist, and 30 women and men from local Q’eqchi Mayan communities. The community members were invited to speak of what was important to them and what they wanted people beyond their borders to know. Nearly everyone spoke; their stories were heart-rending and traced years of abuse. The following is some of what we learned.

After 30 years of civil war, the 1996 Peace Accords authorized tracts of rural land to be made available to indigenous people for agricultural development. Three years later, the government abandoned these efforts and began to sell the land to foreign and domestic companies for investment and development.

Palm oil companies have cultivated more than 80 percent of the land surrounding and in the town of Sayaxche. The production of edible palm oil is a large monoculture process that uses large quantities of water and toxic pesticides, and is destructive to the soil. Palm oil production has taken over and rendered infertile land needed to cultivate corn, beans, and rice for local consumption; and REPSA has diverted most available water to irrigate the palm oil trees. REPSA’s palm oil reaches the U.S. in products like ice cream, soap, and shampoo, as well as bio fuel which is in ever increasing demand.

Community members spoke about social divisions caused by pay-offs to government officials and REPSA’s hiring of non-local laborers who do not directly suffer the negative effects of the palm oil production, and who have few income alternatives. They also spoke about the strong presence of the military, which has defended the efforts of REPSA and the palm oil industry in general; and their suspicions that REPSA undertook some local construction projects in lieu of paying taxes. The projects are hailed by some community members while others see them as further evidence of fraud and manipulation.

Community members raised numerous other concerns related to human and land rights violations, including concern for the children who are ill due to the contaminated environment, and for the murder of Roberto Lima Choc, a newly elected member of the town council who, in September, denounced REPSA in a legal motion about the toxic spill. He was immediately shot and killed. Roberto was 28 years old.

At this writing, contrary to the assurances of REPSA, the river remains contaminated. A court case against REPSA is pending. The people are insisting that the company be permanently shut down. They are prepared for more loss of life!

The conditions that brought about the years of violence and civil war are still in effect today. To a large extent, the indigenous people remain landless and almost voiceless. The government uses the military to control them just as it did with U.S. support during the civil war. The newly elected president of Guatemala, Jimmy Morales, has spoken in support of the Alliance for Prosperity, aid that the people of Sayaxche say has never reached them.

The culture and evolutionary trajectory of a people is integral to lasting development. Development needs to be sustainable and regenerative on all levels so that future generations may live in health and with a sense of well-being and purpose.