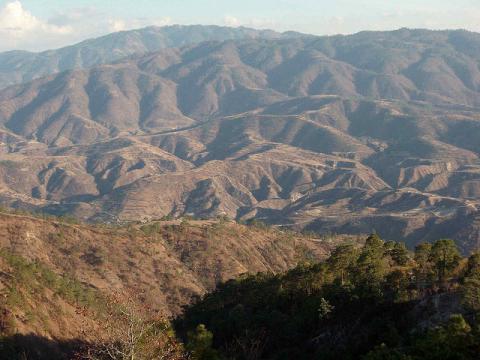 October 1 – Over the last four days, less than a month after President Perez Molina visited the town of Barillas in the department of Huehuetenango and announced the formation of a formal space for dialogue between communities, the government, and the hydroelectric companies Ecoener Hidralia Energía/Hidro Santa Cruz S.A., police and military actions have markedly increased. Q'anjob'al, Akateko, and Chuj peoples with the ladino population have conducted peaceful protests in San Mateo Ixtatán, Barillas, and other communities against the hydroelectric projects authorized by the government before the announced dialogue could take place. The affected communities were outraged that the government failed to fulfill its promise of consultation and dialogue before granting concessions and authorizations for major projects that would harm the environment and water resources, and negatively impact their territory.

In response to the protests the Guatemalan government opted to send the military into the region on September 28. The military immediately began to act by detaining community leader, Maynor López, in Barillas and flying him away by helicopter, presumably to the capital city.

In quickly convened meetings, community leaders, the governor of Huehuetenango, and the Guatemalan Interior Minister have come to a tentative agreement to immediately reduce the military presence by 50 percent and to initiate the previously announced negotiations on October 8. However, the military remains in the area running operations of terror and intimidation with low flying helicopters and roving military patrols that recall the worst abuses of the Guatemalan civil war that left hundreds of thousands of predominantly indigenous citizens dead at the hands of the armed forces.

In the face of military action, the communities of Huehuetenango have put out the following press release demanding an end to militarization, respect for human and collective rights, respect for community governance and consultations, and a halt to the mining and hydroelectric concessions that have disrupted the communities and the environment in the region.

TO THE NATIONAL AND INTERNATIONAL COMMUNITY:

The current aggression against the Q'anjob'al, Akateko, and Chuj peoples as well as the mestizo population in the Northern Region of the department of Huehuetenango by the President and Commander in Chief of the Army, General Otto Fernando Pérez Molina, is attributed to the importance of natural resources such as water, minerals, petroleum and forestry. The President, by way of a press conference highlighted this importance.

These attacks are part of the new process of transnational invasion overseen by the rotating governments in power that implement projects which plunder under the pretext of "development."

These actions are conducted within a counterinsurgency strategy reminiscent of and which revive memories of the internal armed conflict in the eighties, where the military orchestrated plans of aggression and violated the fundamental human rights of society; on September 28-30, 2013, they have used low-flying helicopters, armored vehicles, army troops and special forces of the National Civil Police to terrorize the population.

The strategy of invasion has disproportionately utilized police and military forces with characteristics of a state of war, which has caused the death of various citizens and the injuries of several others. These acts are an unforgivable responsibility of the State.

These repressive and terrorist acts intend to paralyze the legitimate and peaceful struggle in defense of the peoples’ territory.

Licenses have been granted to companies in territories where we exist and live and which we have taken care of for thousands of years. We will not let them destroy us.

We call on the national and international community to stand in solidarity with our peoples and Guatemala.

We will maintain permanent vigilance and observance of the situation of human rights and collective rights of our peoples, because we believe that this situation will continue.

1. That the Government and Ministers respect our human rights including the collective rights of our peoples, and to stop deceiving and confusing the national and international community.

2. The withdrawal of all the troops in the northern part of Huehuetenango, ensuring the protection of human rights and not the interest of transnational corporations.

3. The cancellation of licenses for mining, hydropower, oil and other mega-projects that have been awarded in the department and which are undermining peace and freedom of our peoples.

4. Respect for our Community Consultations held since 2006.

Q'ANJOB'AL, CHUJ, AKATEKO PEOPLES AND THE MESTIZO POPULATION HAVE HISTORICALLY TAKEN CARE OF OUR TERRITORY FOR EVERYONE AND ESPECIALLY FOR OUR FUTURE GENERATIONS.

OUR PEOPLES ONLY WANT TO BE TREATED AS HUMAN BEINGS AND ALLOWED TO LIVE IN PEACE AND HARMONY WITH MOTHER NATURE.