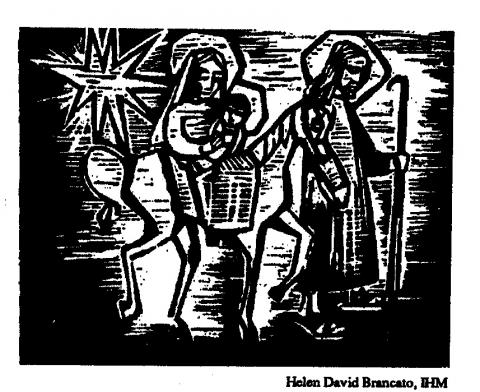 As the global migration crisis continues, Pope Francis traveled to the Greek island of Lesbos on April 16 to meet with some of the many thousands of refugees there and returned to Rome with twelve refugees – a remarkable demonstration of social justice for world leaders grappling with welcoming refugees. The following article was published in the May-June 2016 issue of NewsNotes.

On January 17, the World Day of Migrants and Refugees, Pope Francis said “Biblical revelation urges us to welcome the stranger; it tells us that in so doing, we open our doors to God, and that in the faces of other we see the face of Christ himself.” He went on to say that in the face of worldwide national debates about limits for receiving migrants, the Gospel of mercy should be what guides us “to view migrants not only on the basis of their status as regular or irregular, but above all as people whose dignity is to be protected and who are capable of contributing to progress and the general welfare.” Not one to be reticent about responding to the Gospel in action, last September Pope Francis suggested that “every parish, every religious community, every monastery, every sanctuary of Europe, take in one family.”

It was no surprise when Pope Francis announced that he would be visiting the heart of the global migration crisis – a refugee camp on the Greek island of Lesbos on April 16. So far this year, more than 150,000 people from the Middle East and Africa have made the harrowing journey across the Aegean Sea to Europe. More than half of those have landed on the island of Lesbos. Tragically, at least 22,000 refugees currently stranded on Lesbos are unaccompanied minors. Over lunch at the Moria camp, Pope Francis spoke to the migrants: “We have come to call the attention of the world to this grave humanitarian crisis and to plead for its resolution….As people of faith, we wish to join our voices to speak out on your behalf….We hope that the world will heed these scenes of tragic and indeed desperate need, and respond in a way worthy of our common humanity.”

The surprise came when the pope boarded his plane to Rome, bringing twelve Syrian refugees with him. Three families, including six children, are now staying as “guests of the Vatican” in Italy, and are expected to seek asylum there. On the trip back to Rome the Pope told journalists, “All refugees are children of God” and though his act was “a drop in the ocean”, he hoped “the ocean will never be the same again.”

Among the twelve fortunate refugees is 31-year-old Hasan who, with his wife and 2-year-old son, left Damascus for myriad reasons – the final straw was when he was called for military service. As Hasan told reporters, “I did not want to kill anyone. I’m an engineer, not a soldier. I’m interested in my work.” In Rome, he and his family are now faced with starting a new life, learning a new language, and attempting to find work in a new place far from home, with the help of the lay Catholic community organization in Rome, Sant’Egidio.

President Obama has pledged to resettle 10,000 Syrian refugees in the U.S. by the end of September. This is no easy task when it typically takes 18-24 months to get through the complicated process that includes background checks and interviews by the State Department, National Counterterrorism Center, FBI and Homeland Security.

The global migration crisis – the UN estimates that there are more than 60 million displaced people around the world, the largest number since the World War II era – is, as UN Secretary-General Ban Ki-moon declared, a “defining moment” for Europe and the world.  Ban Ki-moon is scheduled to deliver recommendations on the issue to the UN General Assembly this month. He appointed Karen AbuZayd, a U.S. diplomat, as his Special Adviser for the “Summit on Addressing Large Movements of Refugees and Migrants,” to be held at the UN on September 19.

Pope Francis’ action on Lesbos is yet another example of the Christian message of welcoming the stranger. Francis’ first papal trip in 2013 was to the Italian island of Lampedusa, to call attention to the refugees there, the majority from Libya, and the hundreds who drowned before reaching shore. In Mexico in February, he prayed beneath a large cross erected in Juárez, in sight of the border with the United States, and then celebrated Mass nearby, where he spoke about immigrants.

“Migrants are our brothers and sisters in search of a better life, far away from poverty, hunger, exploitation and the unjust distribution of the planet’s resources which are meant to be equitably shared by all,” Pope Francis said. “Don’t we all want a better, more decent and prosperous life to share with our loved ones?”§

Faith in action: Send a letter to your member of Congress and governor asking them to welcome refugees: http://bit.ly/USWelcomeRefugees.