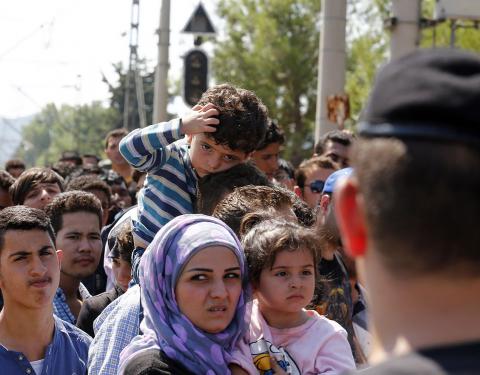 The following article, published in the July-August 2016 issue of NewsNotes, examines the passage of the referendum in the United Kingdom to leave the European Union, commonly known as “Brexit.”

The global migration crisis has strained economic resources, fueled radical politics, and now in all likelihood will fundamentally break a solidarity in Europe forged out of the ashes of the Second World War. Despite Pope Francis’ repeated appeals for mercy for the millions of migrants coming to Europe, mostly from the Middle East and parts of Africa, some European nations have limited their responses to what UN Secretary-General Ban Ki Moon has described as “border closures, barriers, and bigotry.”

On June 23, citizens of the United Kingdom (U.K.) voted to leave the European Union (E.U.). The BBC and The New York Times reported that polling data indicated many of those who voted to leave the E.U. did so despite being aware of the economic gains brought to the U.K. by immigrants and by relations with the E.U. They interviewed many Brexit supporters who described this as an emotional vote against immigration.

That emotion was directed at the European Union, a political and economic union of 28 European states that was formed after the Second World War as a means for promoting peace on the continent by opening borders and pooling resources. As the number of people in the world displaced by conflict has grown to new heights, support for the E.U. has plummeted not only in the U.K., but also in France, Spain, Germany, and not surprisingly, Greece, which is the landing spot for the majority of boats carrying migrants to Europe.

The report by the UN High Commission for Refugees (UNHCR) entitled “Global Trends,” released just days before the Brexit vote, said that the number of people displaced globally in 2015 – 65.3 million – is the highest in recorded history. The report said three countries – Syria, Afghanistan, and Somalia – produce most of the numbers; and one out of every 113 people on Earth is now either an asylum-seeker, internally displaced or a refugee. It also said children make up 51 percent of the world’s refugees in 2015. The report described refugee conditions as “worsening, with many becoming destitute, girls being forced into early marriage, half of all refugee children out of school, many forced to beg on the streets, or becoming the victims of exploitation, including sexual abuse.” “The willingness of nations to work together not just for refugees but for the collective human interest is what's being tested today,” UN Secretary-General Ban Ki Moon said, in response to the report.

The Brexit vote is a monumental fracture in global solidarity in response to the migration crisis in Europe – what Pope Francis has described as "the worst humanitarian disaster since the Second World War.” It signals a sense of fear and a rejection of what Pope Francis has called “the culture of encounter.” In 2013, Pope Francis said the Holy Spirit impels us to open doors and communicate the encounter with Christ. “Let us ask ourselves today: Are we open to ‘God’s surprises?’ Or are we closed and fearful before the newness of the Holy Spirit? Do we have the courage to strike out along the new paths which God’s newness sets before us, or do we resist, barricaded in transient structures which have lost their capacity for openness to what is new?” “A culture of encounter demands that we be ready not only to give, but also to receive,” Francis said in 2014. “What does it mean for us, as disciples of the Lord, to encounter others in the light of the Gospel? In spite of our own limitations and sinfulness, how do we draw truly close to one another? These questions are summed up in what a scribe once asked Jesus: “And who is my neighbor?”

The Brexit vote also signals a desire for control and a rejection of hope. “Hope would have us recognize that there is always a way out,” Pope Francis writes in Laudato Si’, “that we can always redirect our steps, that we can always do something to solve our problems.” In his Easter message, Francis said, “Today, amid so much darkness, we need to see the light of hope and to be men and women who bring hope to others.”

Faith in action: Sign a petition by UNHCR asking UN member states to “work together and do their fair share for refugees” at the General Assembly's High  Level Meeting to address the large movements of refugees and migrants on September 19:  www.unhcr.org/refugeeday/us/petition

Photo: Migrants at the Greek–Macedonian border near Gevgelija, 24 August 2015. Photo by Dragan Tatic and licensed in the creative commons 2.0.