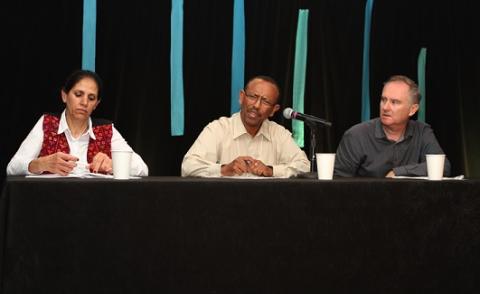 Ecumenical Advocacy Days brought together nearly 1,000 in Washington, D.C. April 21-24, for its 15th national gathering and lobby day. This year’s annual event focused on Christian advocacy to support a moral federal budget which retains key spending in support of vulnerable populations while rejecting exorbitant Pentagon spending. The following article is a summary of international plenary on the third day of the conference and was published in the May-June 2017 issue of NewsNotes.

Ecumenical Advocacy Days is a movement of the ecumenical Christian community, and its recognized partners and allies, grounded in biblical witness and our shared traditions of justice, peace and the integrity of creation. At this year’s gathering in April in Washington, D.C., nearly 1,000 people, through worship, theological reflection and opportunities for learning and witness, grappled with the intersectionality of racism, materialism, and militarism - the ‘triplets’ named by Dr. King in his speech fifty years ago at Riverside Church in New York. Together they advocated for change in public policy that better reflects the Beloved Community. The theme for this year’s gathering was “Confronting chaos, forging community.”

The international plenary at Ecumenical Advocacy Days focused on the topic of the “Global Impact of U.S. Militarization.” Raed Jarrar, Policy Impact Coordinator for the American Friends Service Committee and expert on the impact of U.S. militarization in the Middle East, moderated the panel. The panelists represented snapshots of global militarism from three perspectives: Jeju Island in South Korea, Tent of Nations in Palestine, and African nations with dictatorial leaders. The panelists were Amal Nassar, a farmer and peace advocate from the West Bank in Palestine, Ezekial Gebissa, Professor of History and African Studies at Kettering University, and Father Pat Cunningham of the Columban Missionaries, who is on mission in Seoul, South Korea.

Father Pat Cunningham was the first to present, and spoke about living in South Korea for many years and working as an activist to protect Jeju Island – an island off the South coast where the South Korean government is building a naval base that is meant to serve as strategic positioning for U.S. navy ships to contain China. Fr. Pat spoke of the beautiful rocky coast and the rich habitat of coral reefs that make up the biosphere reserve, home to bottlenose dolphins and abalone, and protected by international law as a UNESCO heritage site.

On this island is a village called Gangjeong, which has become a gathering site for international activists since 2011, when the first fence was built to keep villagers out of the building site for a naval base. Father Pat and many other international peace activists have joined the villagers in nonviolent demonstrations, vigils, and liturgies every day for the last six years.

Father Pat told a story about one day in 2012, when twenty international activists, himself included, paddled kayaks along the sea-side of the building site of the naval base. They came ashore and climbed over the fence, subsequently getting arrested – an action they called “kayaking to save our seas”. This case has drawn the attention of activists around the world who see Jeju Island as symbolic of the global struggle against increasing militarism, with governments making decisions based on the pretenses of “security” and “protection” for the people, while the people suffer the consequences. Father Pat quoted Bishop Peter Kang U-il of Jeju Island, a strong defender of the people of the village: “We have never given up the hope that one day we will be able to live peacefully without the massive naval base for nuclear warships. We will keep praying.”

Amal Nassar spoke next about her family’s farm in Palestine, which were grandfather started in 1916. Despite having official documentation of land ownership from the Ottoman, British, Jordanian and Palestinian authorities, in 1991, the government of Israel declared her family’s 100 acres “state land.” Amal’s family has been fighting the eviction in Israeli court ever since. Amal believes the Israeli government is using a tactic against her family that they use in regard to Palestinians generally: wear them down until they lose hope and give up.

Amal’s family, with support from the international community, persists to this day and intends to continue until justice is served. The Israeli court continues to stall the decision on their case, demanding further documentation (aerial photos, affidavits, witnesses to appear in court); meanwhile, the Israeli government allows a new reality to be created on the ground in the surrounding areas by continuously expanding illegal settlements and encroaching on their property. The family has frequently faced hostility from settlers that live in the five surrounding settlements, including threats and destruction – mainly the uprooting of trees from their orchards of figs, olives, apples and apricots. Sometimes hundreds or even thousands of trees are destroyed. And what is the family’s response? Persist: plant more trees. They now host youth camps on their property to offer hope to Palestinian children. They invite international groups to camp at their “Tent of Nations” and plant trees as a witness to their struggle for justice. “If we knew the world was going to end tomorrow”, Amal said, “we would continue to plant trees today”.

Amal Nassar did not mention, perhaps because she assumes the audience is already aware, that the U.S. contributes more aid to Israel’s military – by far – than to any other country in the world, propping up the occupation of Palestine.

Third to speak was Ezekiel Gebissa, Professor of History & African Studies at Kettering University. Dr. Gebissa spoke about his recent trip to northern Europe where he saw thousands of refugees from the Horn of Africa who had survived the harrowing journey overland through Libya and across the Mediterranean to seek asylum in Europe. Professor Gebissa suggested that concerned U.S. Christians can start by praying for those dying in the Mediterranean while searching for a better life – and then take the next step by working to change U.S. policy which allows African governments to continue stifling their citizens’ rights and hopes for the future.

Over the last sixty years, since most Africans countries have achieved independence from colonialism, the U.S. has supported numerous military coups and dictatorships, including funding support of billions of dollars annually to the current repressive regimes in Ethiopia and Egypt. While some U.S. citizens are of the opinion that the military has caused tremendous pain and suffering around the world, Dr. Gebissa said the popular belief is that the U.S. military is a “force for peace,” which, at times, has “prevented a third World War.”

This mindset blinds U.S. policymakers to the limits of power and encourage overreach, Dr. Gebissa said, “in the quest for security and self-preservation.” He urged the audience to use nonviolent pressure to alter the mindset of our policymakers, because “the advantage of democracies is not that they understand the limits of power, but that they are better able to curb it.”