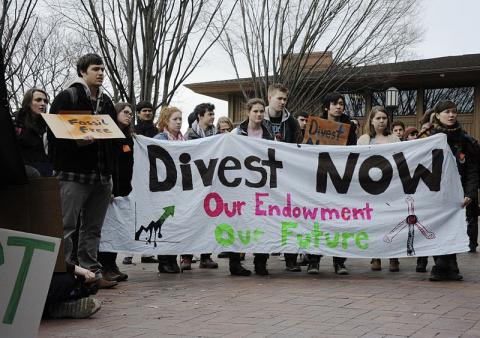 Cathy Rowan has written dozens of articles over the years for NewsNotes on corporate accountability; she contributed the following piece for the November-December 2013 issue.

On October 24, a group of 70 institutional investors managing more than $3 trillion of collective assets launched the first-ever coordinated effort to spur the world’s 45 top oil and gas, coal and electric power companies to assess the financial risks that climate change poses to their business plans.

Recent studies by the Intergovernmental Panel on Climate Change and the International Energy Agency have suggested that, in order to achieve the international goal of limiting global warming to 2ºC, the world will need to live within a set carbon budget, and a significant portion of proven global fossil fuel reserves will need to be left in the ground.

However, the world is currently on a path toward global warming of 4ºC or more, which the World Bank warned must be avoided in order to prevent catastrophic climate change impacts.

The investors, most of them based in the United States and Europe, include California’s two largest public pension funds, the New York State and New York City Comptrollers, socially responsible investment firms and faith-based institutional investors such as the TriState Coalition for Responsible Investment, Maryknoll Sisters, Mercy Investment Services and the Presbyterian Church USA. In September they wrote to the fossil fuel companies, requesting detailed responses before their annual shareholder meetings in early 2014.

"We would like to understand [the company’s] reserve exposure to the risks associated with current and probable future policies for reducing greenhouse gas emissions by 80 percent by 2050," the investors wrote. "We would also like to understand what options there are for [the company] to manage these risks by, for example, reducing the carbon intensity of its assets, divesting its most carbon intensive assets, diversifying its business by investing in lower carbon energy sources or returning capital to shareholders."

A new report by the Carbon Tracker Initiative finds that between 60-80 percent of the coal, oil and gas reserves of publicly listed companies are "unburnable" if the planet is to have a chance of not exceeding global warming of two degrees Celsius.

According to the Unburnable Carbon report, in 2012 alone, the 200 largest publicly traded fossil fuel companies collectively spent an estimated $674 billion on finding and developing new reserves, some of which may never be utilized. This initiative highlights the opportunity to redirect this capital, rather than it being wasted on high carbon assets that could become stranded.

"The world is taking climate change seriously and global pressures to reduce fossil fuel use will only grow stronger," said Jack Ehnes, CEO of the California State Teachers’ Retirement System (CalSTRS), the nation’s second largest public pension fund with $172 billion under management. "As long-term investors, we see the world moving toward a low-carbon future in which fossil fuel reserves that companies continue to develop may actually become a liability, which could take a toll on shareholder value."

As of October 23, investors had received preliminary responses from 20 companies. Detailed answers to the investors’ questions will come in follow-up responses and meetings with the companies. Participating investors are asking their peers to support this effort, which is being called the Carbon Asset Risk (CAR) initiative. The effort is being coordinated by Ceres (a non-profit organization that works with businesses and investors on climate change, water scarcity and other sustainability challenges) and the Carbon Tracker initiative, with support from the Global Investor Coalition on Climate Change.

"Many of the responses investors have received from the companies thus far acknowledge that there is a legitimate risk issue around carbon reserves, and companies are open to continued engagement from the investor community to determine the scope," according to Mark Fulton, a member of the Carbon Tracker’s Advisory Board and a Ceres adviser.

Meanwhile, members of the Interfaith Center on Corporate Responsibility are building on the foundation of past shareholder resolutions that called for setting greenhouse gas emission reduction goals and raising new questions about climate change with corporations as a whole and fossil fuel companies in particular. For example, they are calling for companies (especially fossil fuel companies) to review their present public policy advocacy and move to support national, state and local policy and legislation addressing climate change. Conversely, they will call on companies to stop lobbying, directly and indirectly, in opposition to the EPA regulation of greenhouse gas emissions or legislation addressing climate change.

Photo allowed under the Creative Commons Attribution 2.0 Generic license. Caption: Students at Tufts University "marched forth on March 4th" [2013] coinciding with dozens of student-led rallies around the United States. The marches had the objective of pressuring universities to reduce and eventually eliminate investments in fossil-fuel related ventures. Organized nationally through WeArePowerShift.org, these rallies included speeches, singing, and chanting of slogans such as "Divestment is a Tactic; Justice is the Goal."