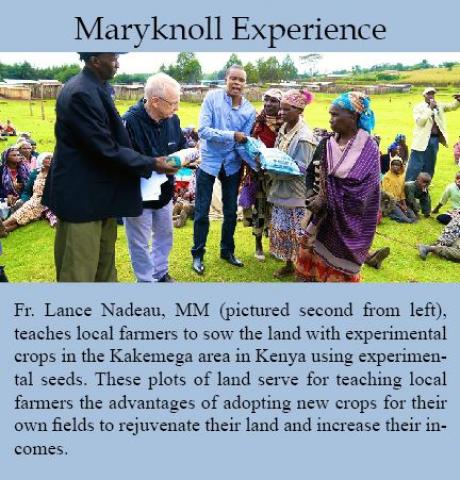 This is a version of the two-page brief on food security published as part of our election briefs series, Faithful Voting and Global Concerns. View the entire series of briefs here. The following article was published in the September-October 2020 issue of NewsNotes.

The International Monetary Fund has declared 2020 to be “a year of reckoning for the world’s food systems.”

Our global food supply chains have faltered under the weight of the coronavirus pandemic. Lockdowns and other restrictions on movement and trade mean that many people cannot access markets, threatening both their lives and their livelihoods. Concern is highest for those in countries across Africa and the Middle East as the virus threatens the informal trading networks many people rely on for survival. In parts of Latin America, lockdowns mean the sale of the harvest, its consumption, and the collection of seeds for the next season are at risk In the United States, empty store shelves and long lines at free food banks during the pandemic expose the weaknesses of the highly centralized and just-in-time supply system. 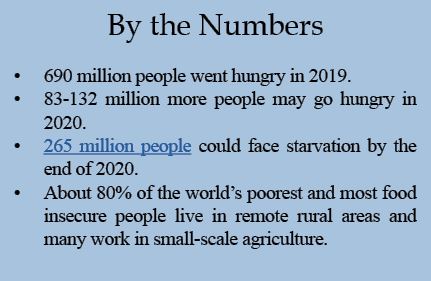 In developing countries, the UN’s Food and Agriculture Organization and the World Food Program expect a “hunger pandemic” unless swift action is taken to ensure food supply chains keep running.

Before the coronavirus hit, we were already concerned for the victims in the global food system. According to the UN’s most recent State of Food Security and Nutrition in the World report, almost 690 million people around the world went hungry in 2019. The hungry are most numerous in Asia but expanding fastest in Africa.

The UN report says a staggering 3 billion people cannot afford a healthy diet. In sub-Saharan Africa and southern Asia, this is the case for 57 percent of the population. If recent trends continue, the Zero Hunger target of the Sustainable Development Goals will not be achieved by 2030.

At the same time, 600 million people were categorized as obese and 2 billion overweight because of imbalanced diets. Poor diets also contribute to conditions such as diabetes and cardiovascular disease, which in turn compromise immune health and make people more vulnerable to COVID-19.

The global food system also causes significant harm to the environment. Food produced through the overuse of chemicals, in monoculture cropping systems, and intensive animal farming degrades natural resources faster than they can reproduce and causes a quarter of greenhouse gas emissions, with livestock responsible for about a half of that.

The face of food security is the smallholder farmer. There are around 500 million smallholder farmers in the world, and they produce up to 80 percent of the food consumed in Africa and Asia. As a group, they are poor and vulnerable to food price increases and spikes. They are also stewards of increasingly scarce natural resources and are on the frontline of climate impacts.

Challenges to access to markets, financing, and trainings are even greater for women farmers, who constitute the majority of farmers in Africa. When women prosper, however, they tend to invest more in their homes and families, giving their children more nutritious food and keeping them healthy.

At the heart of the issue of food security is the sanctity of human life and promotion of life with dignity. Guided by Catholic social teaching we realize that the systemic problem of food insecurity is the consequence of systems centered on the market rather than on the human person.

In his Apostolic Exhortation, Evangelii Gaudium, Pope Francis rejects an economy of exclusion and inequality that harms human beings and the environment. He asked, “Can we continue to stand by when food is thrown away while people are starving?”

Pope Francis reminds us that realizing the fundamental human right to adequate food is not only an economic and “technical” matter, but also principally an ethical and anthropological one. “Hunger and malnutrition can never be considered a normal occurrence to which one must become accustomed, as if it were part of the system,” the pope said in his message for World Food Day in 2013.

In Laudato Si’, Pope Francis says that forgetting people in favor of purely technical remedies separates “what is in reality interconnected” and masks “the true and deepest problems of the global system.”

The rebuilding of economies after the COVID-19 crisis offers a unique opportunity to transform the global food system so that it is resilient to future shocks, environmentally sustainable, and capable of providing nutritious, culturally-appropriate food for all. We can urge our candidates to adopt four broad priorities, suggested by numerous UN agencies:

According to scientific research, industrial animal farming operations that rear large numbers of animals in confined spaces breed lethal viruses, like the 2009 swine flu, and spread antibiotic-resistant “superbugs” because of the overuse of antibiotics to promote their growth and prevent infections. At the same time, our uncontrolled disturbance of pristine habitats for farming and hunting has allowed deadly pathogens like SARS, HIV, and Ebola, to jump species, infecting humans.

God, to those who have hunger, give bread, and to us who have bread, give a hunger for justice.

- A prayer from Latin America

Research your candidates’ platforms. Do they explain their position on hunger, food insecurity, and building a sustainable future? If not, contact them and express your concerns about ensuring a just and sustainable global food system.