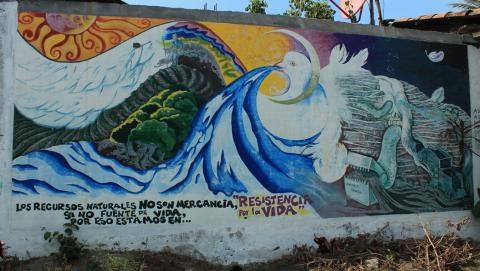 The following article was prepared by Maryknoll lay missioner Joe Hastings, who lives and serves in El Salvador. It was published in the July-August 2014 NewsNotes.

Gold mining in El Salvador is an issue that is both daunting and hopeful. It is hopeful because El Salvador has held at bay the El Dorado gold mine, which , according to polls, most Salvadorans do not want and consider too high a risk for the country’s precious water supply. Data from the Ministry of Environment and Natural Resources (MARN in Spanish) clearly shows the mine’s potential threat to the country’s surface water, 90 percent of which is already contaminated, according to their 2007 report. It’s hopeful because a wide cross-section of Salvadorans, from campesinos to federal officials, are actively engaged – some heroically – in stopping the mine. Their hope was strengthened on March 9, when the country elected a new president who pledged to protect water and monitor mining.

The issue is daunting as well, because the coffers of the OceanaGold mining company – formerly known as Pacific Rim – which owns the El Dorado mine, are deep, and locals claim that money is used to influence politicians, win popular support in communities desperate for funds, and intimidate opponents. It’s daunting because a decision on the legal future of the mine is now out of the hands of the Salvadoran government and sits in the International Center for the Settlement of Investment Disputes (ICSID), a World Bank "court" in Washington, D.C., far away from the voices of anyone who lives in the threatened areas of El Salvador.

In March I joined a delegation to raise awareness of the mine’s threat to water, agriculture and government transparency in El Salvador. We met with Hector Barrios, attorney and activist in San Isidro, a typical small town in Cabañas, the poorest province (department) of El Salvador, and located a mere 10 miles down the road from the El Dorado mine. (The photo of the mural above was taken in San Isidro.) People in Cabañas make their living on small farms, and they can’t do that without water. In just the exploratory stage of the El Dorado mine, Pacific Rim’s drilled "test" wells to find out if there was enough underground water to operate the mine. These wells depleted the water in local hand-dug wells that families depend upon. Local authorities blamed this water loss on "dry years," but expert hydrologists (both Salvadoran and international) point to a mine’s drilling.

How much water are we talking about? By Pacific Rim’s own estimates, the El Dorado mine would use about 73 million gallons of water each year, or about 237,000 gallons a day. The mine site sits high in the Rio Lempa watershed, which irrigates about 45 percent of the nation’s arable land, so a threat to water there is a threat to El Salvador’s farming, ranching, and fishing.

Pacific Rim’s own statements also admit that for every ounce of gold extracted, one ton of rock must be crushed and "removed." A lot of rock? Yes, especially when Pacific Rim itself claims a potential five to 25 million ounces of gold over the mine’s projected 10-year life-span. At a current price somewhere north of US$1,250/oz., the El Dorado mine would bring significant fortunes to its owners and investors.

Given the potential environmental damage, the MARN did not approve Pacific Rim’s permit to operate the mine, so in 2009 Pacific Rim took the government of El Salvador to the World Bank’s court, seeking US$301 million for profits on its investment, which it claims it was unjustly denied. OceanaGold, an Australian company, purchased Pacific Rim in 2013, and continues the suit. El Salvador is optimistic, as they have received favorable judgments from the ICSID before, but past is no guarantee. A verdict is expected in 2015.

For area residents, pushing back against the mine is dangerous. The local community center bears a mural of Marcelo Rivera, a schoolteacher who was very active in opposing the mine. Rivera was "disappeared" in June 2009, and his body later discovered – tortured and strangled – dumped down a well. (See the short documentary "The Mysterious Death of Marcelo Rivera" by Jamie Moffat.) Intimidations continue. Hector Barrios and his family have received several threats, and at a May forum in San Salvador on the issue, El Salvador’s Federal Attorney for Human Rights, David Morales, reported that Pacific Rim/Oceana Gold’s presence in Cabañas has coincided with a rise in violence in towns around the mine, and that journalists reporting on the activities of mining companies have received threats as well.

But these threats haven’t deterred local people in fighting for their future. They use every method to raise awareness of the mine’s threat to water, painting murals conveying their concern for the region’s water, and helping young musicians record songs on the issue.

The Salvadoran Catholic bishops’ conference has stood by its 1997 unanimous statement against the mine, stating simply that "metallic mining is not viable in the country," and that "no material benefit is can compare with the value of human life." Caritas El Salvador, the human development agency of the Salvadoran Catholic Church, has consistently opposed the mine, knowing that the livelihood of many Salvadorans, especially of those who are poor, is tied to good stewardship of the country’s water and arable land. Local community agencies have carefully studied the mines’ claims of job creation and found them wildly exaggerated. So Caritas has joined many local groups in educating about the mine’s potential threats, about the importance of preserving the nation’s water supply, and creating events for Salvadorans to make their opposition to the mine known to their government. Their message is summed up in a popular poster seen around the country: "We can live without gold. We cannot live without water."