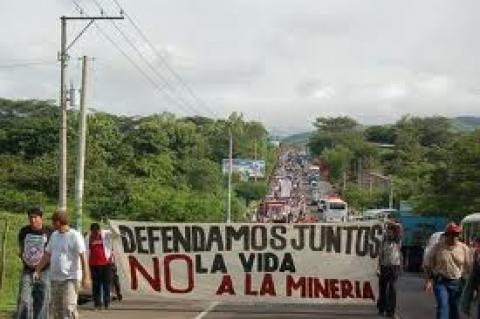 A recent mixed decision by the International Center for the Settlement of Investment Disputes (ICSID), a part of the World Bank, means the government of El Salvador must continue to spend millions of dollars in court to defend itself from a lawsuit by Pacific Rim, a Canadian mining company. The following piece, published in the July-August 2012 NewsNotes, is an update from an article by Sarah Anderson with the Institute for Policy Studies, published in the March-April 2012 NewsNotes.

Pacific Rim (PacRim) sued the government of El Salvador in April 2009 when the country refused to grant a gold mining permit to the company. Numerous civil society organizations including the Catholic Church had raised concerns that the mine would use cyanide that would leak into the Lempa River, a major waterway which provides drinking water to almost half the country’s population.

The ICSID decision at the end of June was a partial victory for the Salvadoran government and those who are concerned with growing numbers of similar international lawsuits. PacRim boldly tried to use the Central America Free Trade Agreement (CAFTA) to sue El Salvador despite the fact that Canada is not a signatory of the pact. The company’s CEO thought simply moving one of its subsidiaries from the Cayman Islands to Reno, NV would be enough to be considered a U.S. firm. Luckily, the court struck down that part of the lawsuit saying that the Canadian firm had no right to use CAFTA laws.

But the court did uphold PacRim’s right to sue using El Salvador’s own national investment law. This means the case will likely drag on for years forcing the Salvadoran government to spend millions of dollars that could otherwise be spent on health care or education.

As the Institute for Policy Studies reports, extractive industries are increasingly using international tribunals to force governments to permit them to mine. “Pacific Rim is just one of more than 40 pending ‘investor-state’ cases related to oil, mining, and gas before the International Center for the Settlement of Investment Disputes, the most frequently used international investment arbitration tribunal. By contrast, in 2000 there were only three ICSID cases related to these extractive industries.”