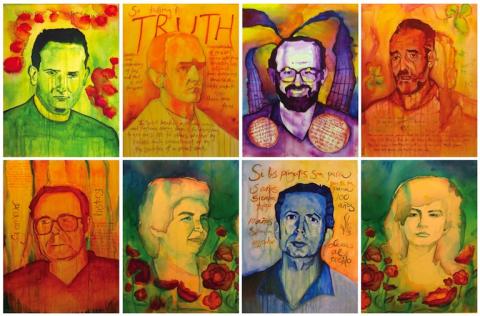 After almost thirty years of impunity, there may finally be some measure of justice for the six Jesuit priests and two women murdered by the Salvadoran military in San Salvador in 1989. The following is an excerpt from an article written by Geoff Thale and Sarah Kinosian that was originally published by the Washington Office on Latin America, and also published in the March-April 2016 issue of NewsNotes.

“A U.S. judge’s February 5 decision to extradite a high-level military officer to Spain means that a Spanish court of law will likely hear evidence and pass judgment on a group of Salvadoran military officers for their role in one of the most emblematic cases in the country’s civil war. Although the trial will take place in Spain, it will have repercussions in El Salvador—for domestic politics, for the rule of law, and for human rights.

“When finally extradited, Salvadoran colonel Orlando Montano will face charges in Spain, where he and sixteen other Salvadoran military officers have been indicted for their role in planning and carrying out the murders of the Jesuits, five of whom were Spanish citizens. Because Spanish criminal procedure dictates that a trial may only proceed when one defendant is physically present in court, the case has been stalled. So, while it may be some time before Colonel Montano exhausts his last appeal and is actually sent to Spain, the decision means that the case against him and the remaining officers will go to trial.”

“In January of this year, the Spanish court renewed its request that the Salvadoran government detain sixteen retired officers while a formal extradition request was filed. But, until the Montano decision, El Salvador’s National Civilian Police (PNC) had taken no action. Then, on February 9, three days after the Montano decision, they made the four arrests. Since then, the PNC has announced they are searching for the other twelve defendants, including the then-commander of the top military academy and several former senior commanders in the armed forces. El Salvador’s president, Salvador Sánchez Cerén, has urged the defendants to turn themselves in.

“While this is a positive step towards justice, it is just an initial one. The four arrested military men were among the group that had been tried in 1991. While it is encouraging that any arrests have been made, it is quite telling about the political sensitivity of the issue that no senior officials have been captured. It remains to be seen if other arrests are made. The arrests also mean that El Salvador’s Supreme Court will have to revisit its previous decision that the amnesty law prevents the extradition of the military officers; it is not yet clear how they will rule.

“The recent arrests have already struck a nerve in El Salvador, where there has been pushback against the arrests and the possibility of extradition. The detained soldiers’ families held a press conference denouncing the arrests and calling them politicized. The conservative ARENA party and two of its small allied parties held a meeting with President Sánchez Cerén to express their opposition.”

. . .“In the coming weeks, we will see if the arrests truly bring an end to impunity in this emblematic case and what implications, if any, this will have for human rights cases in the country. The decision to extradite Colonel Montano could lead to a significant change in how El Salvador approaches historic human rights cases, and an even broader impact on the rule of law. At the very least, Colonel Montano’s extradition will likely lead to a public trial in Spain, where he and other military officers, whether present or not, are finally held accountable for their actions in the Jesuit case.”

“Despite the complicated political uncertainties surrounding this case, it is important to note that the ruling for Colonels Montano’s extradition is an extremely important step for human rights and the rule of law. While it would be best if this trial were taking place in El Salvador, holding the trial in Spain may bring a measure of justice and open the way for future domestic prosecutions.”

Photo: Painting of Jesuit martyrs by Mary Pimmel-Freeman, on display at Rockhurst University.