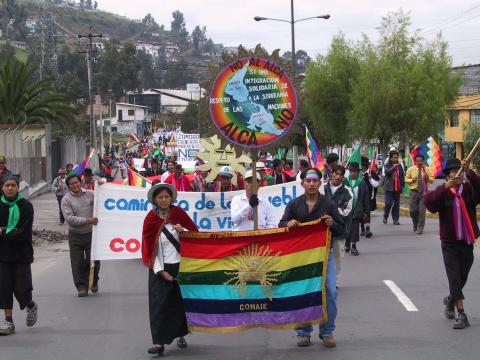 In the last few years, Ecuador has experienced a disturbing increase in government, police and military crackdowns on peaceful protests held against the exploitation of natural resources. Amnesty International has released a report, So that no one can demand anything – Criminalizing the right to protest in Ecuador? (AI Index no: AMR 28/002/2012), on patterns of criminalization of community leaders who participate in these mobilizations.

According to Amnesty, article 129 of Ecuador’s penal code allows up to three years of imprisonment for anyone who "illegally impedes the free transit of cars, people or merchandise" on public roads. Based on its present content, no exceptions are possible – not even for minimal interference resulting from the exercise of human rights, such as freedom of expression, assembly and association. Until nuances are made in the laws to protect one’s human right to assemble and to exercise freedom of expression, authorities are using the legal system to suppress peaceful protests and opposition to extractive industry and natural resource projects. In most instances, these protests occur after the Ecuadoran state has failed to adequately consult communities affected by the projects.

Maryknoll Sister Elsie Monge, executive director of Ecuador’s Ecumenical Center for Human Rights (CEDHU), notes several recent cases that highlight this pattern of criminalization and intimidation: For instance, on November 12, 2012, a judge ordered Manuel Trujillo and Manuela Pacheco, the president and a leader of the community of San Pablo de Amali, to serve jail time despite evidence that they were only exercising their right to protest the Hidrotambo Hydroelectric Project, which they have been peacefully protesting for years. Until now, however, the court never sentenced them to jail, but rather mandated alternative sentencing.

The historical resistance and peaceful protest of this project by the community is noteworthy. In 2005, Ecuador’s National Council of Electricity (CONELEC) gave Hidrotambo S.A. an environmental license to proceed with the project. More than 70 indigenous and peasant communities live on the land where the project would take place. The livelihood of these people depends upon agriculture and fishing, which the project would completely disrupt. The San Pablo de Amali community especially is impacted due to its location, where the project’s heavy machinery and industrial construction is planned.

From the beginning, this community has denounced the project. They have made it known that they were never consulted and that an environmental impact study was never presented, calling into question CONELEC’s granting an environmental license to proceed.

Between 2006 and 2008, as heavy machinery was brought in, signaling the initiation of the project, the local population and the Army Corps of Engineers faced each other in multiple confrontations. People from various communities opposed to the project confronted approximately 300 members of the military; protestors were arrested on a variety of charges (cleared in 2008). The project was halted until March 8, 2012, when CONELEC again granted permission for the project under the guise of a new contract.

Since March 24, 2012, the project has moved forward aggressively, without any legal authorization, with police and heavy machinery destroying homes and property located where the project is planned. Those who oppose the project have been detained by police who have entered private property without search warrants.