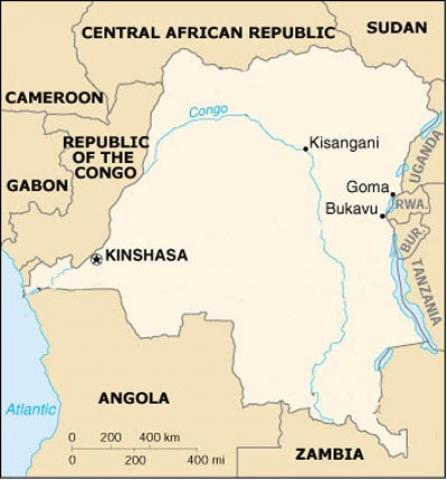 In early September, faith-based organizations worked together to issue a statement citing the “recent surge in violence in eastern Congo with the mutiny and rise of the March 23 movement, or M23,” and their alarm at United Nations reports revealing the government of Rwanda’s role in supporting and perpetuating violence by orchestrating and bolstering M23 with both military and financial support. The violence must end in the war torn country, and the U.S. government could be playing a stronger role in securing peace in the eastern region of the Democratic Republic of the Congo (DRC). The following article was published in the September-October 2012 NewsNotes.

Efforts by the Rwandan government to support M23 have been documented by experts and confirmed by human rights organizations, and are having a devastating impact on communities in the region, both in eastern Congo and in Rwanda. In an August 4 message to the international faith community, Rev. Josue’ Bulambo Lembelembe, vice president of the Church of Christ of the Congo, pleaded, “Help us. Help our population recover peace. We want unity. These populations say no to violence [and] the illegal exploitation of our resources...” According to Ecumenical News International (ENI), faith leaders in eastern DRC report that more than 30,000 individuals have been displaced in North Kivu Province due to fighting between rebel groups. “The latest fighting started in April following disagreements over a 2009 accord that integrated the rebels into the national army. Army officers mutinied and formed M23,” reports ENI.

Grave concerns have been raised by the fact that the government of Rwanda is supporting the M23 and, by doing so, has breached a number of its international obligations and is posing a serious threat to international peace and security in the region. Faith communities have called on Rwanda to immediately cease all support for the M23 rebellion and be proactive in seeking resolution and long-term, sustainable peace in the region; both the governments of the DRC and Rwanda should take steps to immediately end the violence, provide aid for those affected by the conflict, and begin to engage in an open dialogue that helps create space for local reconciliation efforts.

While some members of the U.S. Congress and State Department have recently spoken out publically on the conflict and have taken some initial steps to suspend non-humanitarian aid to Rwanda, much more can be done to stem the tide of violence.

When President Obama was a senator, one of the two bills he authored that became law was the Democratic Republic of the Congo Relief, Security, and Democracy Promotion Act of 2006 (S. 2125 [109th]). In 2006, then-fellow senator Hillary Clinton was a co-sponsor, along with 11 others.

S. 2125 includes specific provisions on conflict minerals and sexual violence; sanctions on armed groups and their state-sponsors; and support for democracy. Section 105 of the Obama-written law authorizes the secretary of state to withhold assistance from a foreign country if she determines that the foreign government is taking actions to destabilize the DRC. According to the Institute for Policy Studies, Obama’s law, passed six years ago, is still the only official policy the United States has on the books for dealing with the present crisis in eastern Congo crisis.

But as president, Obama has never implemented the law he authored, despite abundant evidence of abuses. Additionally, Section 1502 of the Financial Reform Act of 2010 requires that the U.S. Securities Exchange ensure that U.S. American companies do not source minerals from the DRC’s conflict zones – essentially referring to North and South Kivu regions in eastern DRC – as a critical step to achieving peace.

Though the U.S. government dragged its feet in implementing this provision, and in spite of industry arguments that such provisions would prove too costly and give rivals sensitive information, on August 22 the Securities and Exchange Commission (SEC) finalized a rule requiring manufacturers to disclose whether their products include certain minerals from the war-torn DRC. At the same time, the SEC finalized rules for Section 1504 of the Financial Reform Act of 2010, requiring 1,100 oil, gas and mining companies registered with SEC to disclose their payments to U.S. and foreign governments, country-by-country and at the project-level every year beginning September 30, 2013.

Faith in action: Write a thank you note to the SEC and send it via the SEC’s online comment form or via personal email to Chairman Mary L. Schapiro.