DRC: The U.S. can and should do more 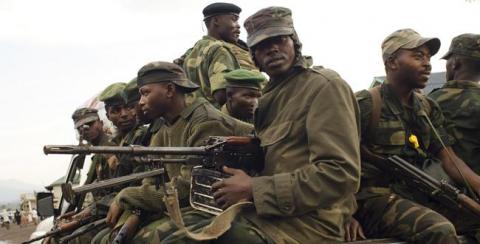 The Democratic Republic of the Congo (DRC) is the site of the world’s longest-running and most expensive peacekeeping operations, including a UN peacekeeping presence for several years after its independence in 1960 and more recent UN missions starting in the late 1990s. Despite this, an estimated five million people have died in the years since the second regional war began in 1998, and millions more have been forced to flee their homes. The people of eastern DRC, especially North and South Kivu provinces in particular, have faced displacement, atrocities, and repeated cycles of conflict; sexual violence has become a tool of war used against tens of thousands of women, men, and children. The following is an update on the advocacy efforts underway to address this volatile situation.

The March 23 Movement, known as the M23 and active in the DRC’s eastern provinces of North and South Kivu, represents a continuation of fighting that has persisted since the formal end of the second Congo war in 2002-2003. The M23 is made up ethnic Tutsi soldiers who were former members of the Rebel National Congress for the Defense of the People (CNDP) who, after mutining against the government of the DRC, were supported by the governments of Rwanda and Uganda. From November 20-December 1, 2012, M23 took over the provincial capital of Goma, forcing more than 140,000 people to flee their homes. After 11 days of defending their gains and making advances, the M23 agreed to withdraw from Goma.

On November 30, the U.S. Senate unanimously passed an amendment giving authority to the Secretary of Treasury to impose sanctions on persons providing financial, material, or technological support to M23. On December 10 the Africa Faith and Justice Network joined 13 other organizations in a widely circulated and publicized letter strongly recommending that the U.S.: 1. appoint a special envoy to leverage the U.S.’s influence to ensure that all parties fully cooperate with an international political process, and work closely with the proposed UN envoy; 2. call for a UN envoy to the Great Lakes to work with the African Union and other regional and sub-regional stakeholders, leading a credible international political process that addresses the continual cycles of violence and regional interference; 3. support robust UN sanctions on all individuals identified in the UN Group of Experts' final report, including senior Rwandan government officials, and those individuals and entities supporting criminal networks through the trade in natural resources; and 4. suspend and cut off non-humanitarian aid U.S. assistance to Rwanda while publicly condemning Rwanda’s support for the M23.

When the House Subcommittee on Africa held a hearing on Rwanda’s devastating destabilization of the DRC on December 11, Rep. Christopher Smith (R-NJ) asked Ambassador Johnnie Carson, Assistant Secretary of State for African Affairs, why the U.S. has not taken measures to withhold military aid to the government of Rwanda. Rep. Tom Marino (R-PA) followed, asking Ambassador Carson: "How many more people have to die before you get serious about this?" Both Smith, who chairs the subcommittee, and the subcommittee’s ranking member, Rep. Karen Bass (D-CA), equally underscored the fact that the U.S. has to decisively address Rwanda’s ongoing destabilization of the DRC and support peace efforts for the Congolese.

On December 10, the Maryknoll Office for Global Concerns endorsed a petition to President Obama from the Association of Concerned African Scholars (ACAS), a national organization of professors and other specialists on Africa. The petition referred to the conflict as "the deadliest documented conflict since World War II" and called on President Obama to take bilateral and multilateral actions through the United Nations to protect civilians in the conflict zone of eastern DRC. Specifically, the petition calls on the president to use U.S. influence at the UN to provide its Organization Mission in the DRC (MONUC) forces with the mandate and resources to protect civilians, to sanction Rwanda and Uganda for any support to militias there, to use the Securities and Exchange Commission (SEC) to enforce the Dodd-Frank Act on conflict minerals, and to fully implement the Obama Act of 2006 on the Congolese Army for their contributions to the disorder.

The White House held a conference call on December 12 with NGOs and others invested in peace in the DRC. Though not confirmed by the White House, those in attendance from the Africa Faith and Justice Network believe that the call was triggered by the Congressional hearing which raised questions similar to those outlined by the NGOs’ letter and the ACAS petition pointing to failed DRC policy on the part of the Obama administration.