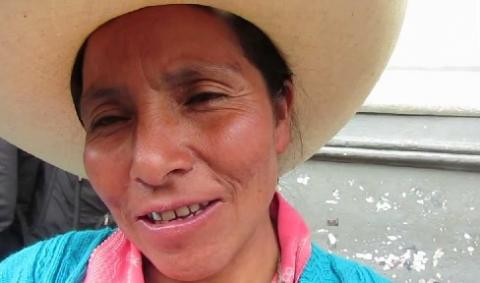 Chloe Schwabe, Faith-Economy-Ecology project coordinator for the Maryknoll Office for Global Concerns, reports from the Civil Society Forum at the 2015 Annual Meetings of the World Bank Group and International Monetary Fund (IMF) in Lima, Peru.

In October, the World Bank and International Monetary Fund (IMF) are hosting their joint annual meeting of the boards of governors in Lima, Peru. This includes the Civil Society Policy Forum, which provides civil society representatives the opportunity to present their views to their colleagues and World Bank and IMF staff.

I am representing Maryknoll at the Civil Society Policy Forum. It is an excellent opportunity for civil society representatives to raise questions and concerns about policy with the presidents of the IMF and World Bank at a town hall meeting, and with executive directors of the World Bank at a roundtable meeting.

A significant issue being discussed is the respect for human rights in Bank-funded projects. This issue is central to the ongoing update of the World Bank Environmental and Social Safeguards. This process started in 2013 and is projected to conclude in April 2017. So far, the safeguards have broadened in scope to include the needs of vulnerable populations such as children, the elderly, women, indigenous peoples, the LGBTI community, and people with disabilities. They also now include environmental protections for forests and climate change.

The Safeguards team reported that it feels pressured by two sides: by the governments that oppose more stringent safeguards, particularly related to human rights protections, and by civil society groups that feel their needs are not taken into account in publicly-financed projects at the Bank as they stand.

Throughout the week-long Civil Society Forum, I have heard powerful testimonies from civil society representatives about the need for the Bank to adopt a human rights-based approach to development. A Peruvian woman named Acuña de Chaupe (pictured) testified that she and her family suffered death threats, their house torn down and animals killed, when they refused to vacate their land in order for a multinational mining corporation to expand the Yanacocha Mine, an open-pit gold mine. The family won the lawsuit filed against them by the Yanacocha Mine in December.

In addition, a man from the Ivory Coast testified to the closing of civil society space there. A man from Jordan also discussed the closing of civil society space, especially for workers. A woman from Egypt described her experience of the Bank disregarding feedback from Egyptian NGOs in the draft safeguards and acting more for finance than development.

One positive story was shared by a woman from Zimbabwe. Her community organized successfully to stop land grabbing by a mining company financed by the World Bank after diamonds were found on the land. The community started a community mining project and joined the Zimbabwe Mining Transparency Initiative.

In many moments this week, I have noted that there are two conversations underway – one highlighting how far the World Bank has come and its so-called “development miracles” in countries such as Peru and the Ivory Coast. And another describing World Bank-financed projects that are pushing communities in these same countries further into poverty, leading to human rights violations, and excluding many from the benefits of development.

Until these stories are placed under the same bright spotlight that the finance ministers enjoy, and the lessons of past projects are incorporated into practice, finance will continue to trump development.