Debt trial of the century 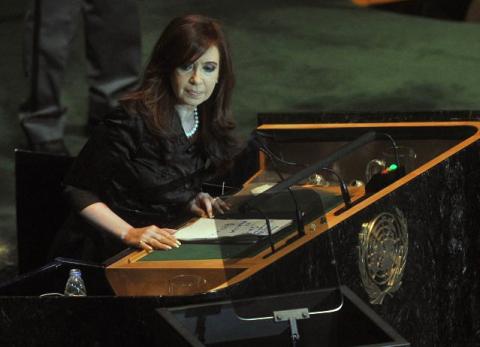 On August 23, a U.S. appellate court upheld an earlier decision requiring Argentina to pay a number of hedge funds more than $1.3 billion. The government of President Cristina Fernandez de Kirchner has appealed to the Supreme Court which is set to decide later this year whether it will hear the case. The results of the lawsuit could have dire ramifications for people living in countries overwhelmed with debt in the global South and highlights the desperate need for global reforms in how nations deal with unpayable debts.

Due to a severe financial crisis in 2001, Argentina was unable to pay its enormous debt burden and defaulted on more than $81 billion. The country then renegotiated its debts, with 92 percent of its creditors accepting an agreement in which they would receive about 30 cents for every dollar owed to them. Some of these investors have already recovered three-quarters of their pre-default investment. Yet a handful of hedge funds, referred to as "vulture funds," have refused Argentina’s offer and are now suing for full payment of the loan.

This is the modus operandi of vulture funds. They identify countries in financial distress, buy parts of that country’s debt at huge discounts – sometimes literally paying a few pennies on the dollar – and then sue those countries for the full value plus interest, using courts to bring in huge profits for themselves while draining money from public services like education and health care. In 1999, Liberia was forced to pay $20 million to two vulture funds, an amount equal to 155 percent of that country’s health budget or 105 percent of its education budget. Zambia was ordered to pay $55 million to a vulture fund that same year. "These funds are among the very worst actors in our international financial system," notes Dr. Collins Magalasi, executive director of the African Forum and Network on Debt and Development.

In the Argentine case, the vulture funds are led by NML Capital, a hedge fund owned by Paul Singer, an investor with a net worth estimated at more than $1.3 billion. In October 2012, NML Capital went to court in Ghana to seize an Argentine ship, the ADA Libertad, that was parked off Ghana’s coast, until Argentina paid its debt to the hedge fund. The court agreed and seized the ship for nearly three months until a United Nations court overruled the decision.

The case has been called the "trial of the century" because of its far-reaching consequences. If the hedge funds win the case, it will make it much more difficult, if not impossible, for countries to renegotiate their debts, thereby prolonging economic crises. Creditors will no longer be willing to renegotiate their loans, lower interest rates or give more leniency in payments if they know that they can go to court to get 100 percent of the loan. Those most affected will be marginalized and vulnerable communities that will see health clinics and schools close, water and electricity prices rise and jobs lost as governments funnel more and more money toward debt payments.

In addition, a decision in favor of the vulture funds could undermine the already weakened international financial system. As Aldo Caliari of the Center of Concern said in testimony before the U.S. Congress, "The situation of chaos, uncertainty and contagion that typically accompanies a sovereign debt crisis will risk being far more prolonged, and potentially bring the global economy to a sudden stop." As he pointed out, "With debt levels in advanced countries at their highest peak in peacetime, and several emerging markets also showing worrying signs of growing debt levels, we cannot rule out more countries finding themselves in a situation of debt distress."

International Monetary Fund Managing Director Christine Lagarde said, "Our concern is that the lower court’s decision would undermine the ability of the debtors and creditors to reach an agreement. In that respect it could be a threat to financial stability." The U.S. and French governments have also written amicus briefs to the Supreme Court in favor of Argentina, expressing concern of the case’s possible effects on the world economy.

More than anything, this case shows the urgent need for global rules around sovereign debt (debt held by national governments). While individuals and businesses in most countries are able to declare bankruptcy, which allows them to restructure their debts so as to maintain their homes and continue their businesses (something beneficial to both creditors and debtors, as well as the larger society), there is no equivalent for nations facing overwhelming debts. Without such mechanisms, economic crises are prolonged and financial stability is jeopardized.

We pray that the Supreme Court decides to hear this case and helps to find a just solution to the problem. As the Financial Times has observed, "Trapping countries in unpayable debt obligations is dangerous," and as Maryknoll missioners around the world have seen, it is people who live in poverty who suffer most from these debts.