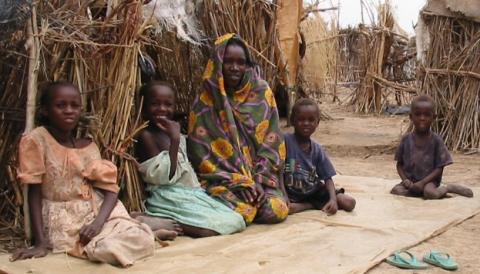 The Darfur Women Action Group held its third annual symposium in Washington, D.C. on October 25-26. Brenda Soka, an intern with the Maryknoll Office for Global Concerns, attended and wrote the following summary of highlights; this article was published in the November-December 2014 NewsNotes.

The two day symposium included panels with prominent figures and activists who shared insights into the numerous human rights violations, and raised awareness of the lack of tangible action by the international community and the need to emphasize the protection of women.

Niemat Ahmadi, president of Darfur Women Action Group, identified the situation in Darfur as the longest genocide in history with 11 years of consistent human rights abuses and proxy violence which President Omar al Bashir’s regime in Khartoum has used to destroy the Darfuri people.

In the 21st century, sexual violence – a systemized and targeted weapon of war which not only destroys the woman but also cripples the community as women are the backbones of society – is now understood as a component of genocide. According to Eric Reeves, prominent journalist and Sudan expert, refugee women are vulnerable to rape as soon as they step out of the internationally displaced persons (IDP) camps;  rape survivors often have suicidal thoughts and an increased deterioration of their mental health. Furthermore, as confirmed by Ikklas Abdelmageed, a research fellow with the Institute for Peace’s Sudanese & South Sudanese Young Leaders Program, nonprofit organizations in Darfur have been unable to respond to sexual violence problems as attempts to address the issue have been hindered by the Sudanese government. It has been reported that UNAMID (the joint African Union and United Nations peacekeeping mission) turns away rape cases, simply because their mandate does not include sexual violence. According to Reeves, “what the international community allows to continue is genocide by attrition.”

Participants and speakers alike at the symposium often questioned the role and progress of the International Criminal Court (ICC) in the prevention and containment of genocide. Currently al Bashir faces arrest warrants for 10 counts of crimes against humanity, war crimes and genocide, on the basis of his individual criminal responsibility under Article 25 (3) (a) of the Rome Statute. He has managed to evade arrest, and continues to trade with various Middle Eastern states and to travel to sympathetic countries. Critics question whether the warrants for al Bashir will be effective enough to stop the human rights violations committed by his regime. ICC prosecutor Fatou Bensouda reiterated that her office will do all in its power to prosecute crimes of genocide and particularly crimes of sexual violence and gender-based violence. She assured the participants that al Bashir will face justice, the ICC will ensure accountability, and justice will be served to the people of Darfur.

Tom Andrews, president of United to End Genocide, noted that all countries – especially those which thus far have welcomed al Bashir and ignored the ICC’s warrant for his arrest – must have political will to stop al Bashir and end genocide. According to Andrews, the U.S. should have put political pressure on Egypt to prevent al Bashir from visiting that country, given that Egypt is one of the largest recipients of U.S. foreign aid. Impunity allowed by sympathetic states is the main reason that perpetrators of genocide are not prosecuted early enough.

The primary message of the symposium was that the empowerment of women in Darfur is highly imperative in order to stop the genocide. Rwandan Ambassador Mathilde Mukantabana gave insight into the successful role of women during the 1994 genocide, when many men were killed, and women stepped in to become the breadwinners and worked together to rebuild the fabric of the country.

The Sudanese diaspora members and activists who attended the symposium discussed many ideas for inclusive reforms that would help the situation in Darfur, halt gender-based violence and assist in removing al Bashir’s regime from power in Sudan. One suggestion was that the Sudanese diaspora throughout the U.S. should unite to advocate for the Darfuri people, since they have the power afforded to those who are removed from immediate danger but have special influence as they are indigenous to Darfur and have a deep understanding of the conflict. Participants and panelists also agreed that there should be a movement in the U.S. for a campaign to seize al Bashir’s assets in order to weaken his monetary capital. This campaign could include the Rewards for Justice Bill, developed by the State Department’s Office of Global Criminal Justice to pay whistleblowers who have information as to the whereabouts of al Bashir’s personal bank accounts. Additionally, it was suggested that the U.S. government should act to curb the Sudanese military’s power by sanctioning countries that conduct trade with al Bashir.