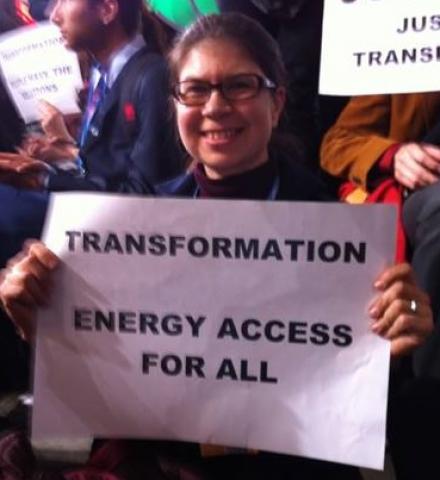 The following article was written by Chloe Schwabe, the Faith-Economy-Ecology project coordinator for the Maryland Office for Global Concerns. She and three Maryknoll Sisters were official observers at the Paris Climate Summit (COP21). The Sisters’ reflections and this article are published in the January-February 2016 issue of NewsNotes.

The Paris Climate Summit (COP21) concluded on December 12, exceeding expectations of what might be politically possible. The success of the talks was due to the strong voice of vulnerable countries, advocacy by non-state actors, and U.S. deals negotiated beforehand with India and China.

The agreement has the goal of “holding the increase in global average temperature to well below 2 degrees Celsius above pre-industrial levels…” but also an aspirational goal of limiting the temperature increase to 1.5 degrees Celsius above pre-industrial levels, “recognizing that this would significantly reduce the risks and impacts of climate change."

The recognition of the aspirational goal of 1.5C is due to the strong presence of the Climate Vulnerable Forum, representing 20 island nations in Asia and the Caribbean, Central America, and Sub-Saharan Africa. The agreement acknowledges that we are going to surpass the goal of 2C, but through mitigation efforts, we could possibly limit temperature increase to 1.5C.

Advocates from the Vatican, multiple faith groups, and young adults also played a role in the call to limit global temperature rise to 1.5C. Young adults carried out actions in the “blue zone” (where the delegates met) and around the city of Paris, each person marked with a black circle around one eye and using a hand signal representing 1.5C.

Concerns over the 2C goal is also why the agreement includes language on “loss and damage” – or what happens when mitigation and adaptation efforts are not enough, when small island nations and coastline communities go underwater, or farmers in dry climates can no longer grow food. These scenarios require a mechanism to provide insurance for farmers, and a coordinated response to the needs of homeless and stateless refugees. The Paris agreement makes the Warsaw International Mechanism on Loss and Damage (established at the UN Climate Change Conference in Warsaw in 2013) permanent.

One sticking point was that the U.S. insisted on language to ensure it would not be liable for compensation ensuing from loss and damage. UN climate talks will continue to address this issue in the future.

Before the talks began, each country submitted a pledge, detailing plans to reduce greenhouse gas emissions. This brought the world closer to the 2C goal, with some scientists estimating that the pledges bring us to 2.7C. But through advocacy by environmental groups, and the U.S. and vulnerable countries, all countries have to review their pledges every five years and consider more ambitious commitments. The first review will be in 2018.

Another remarkable sequence of events occurred over the inclusion of human rights language in the agreement. Near the end of the talks, on Human Rights Day, December 10, negotiators released a draft of the agreement in which all references to human rights were “bracketed” – meaning under threat of being deleted from the final agreement. This included the rights of indigenous peoples, migrants, children, persons with disabilities, and people in vulnerable situations and under occupation. Civil society representatives held a sit-in in the country pavilions space with signs and chants in support of human rights and 1.5C. The atmosphere was electrifying. In the end, human rights language was included in the Adaptation section of the legally binding agreement; and indigenous, labor, women, and intergenerational rights and the rights of nature were included in the preamble. While not legally binding, the preamble sends a signal that human rights must be taken into account throughout the agreement.

People of faith participated in these campaigns by leading prayer services and vigils, joining advocacy meetings with delegates, and participating in actions. It was the largest faith presence at any previous COP and the moral voice was critical to the outcomes.

Maryknoll was right in the center of it all. We shared stories from Bangladesh, the Philippines, El Salvador, and Zimbabwe, and described how climate change impacts communities Maryknoll missioners serve.

We celebrate this historic moment and yet realize that the work has just begun. The Paris agreement gives us direction and energy to ensure the goals of the agreement are realized and strengthened in the years to come. We encourage you to join us on the Path from Paris. Read our post-Paris statement and study guides at www.maryknollogc.org/tag/path-paris.