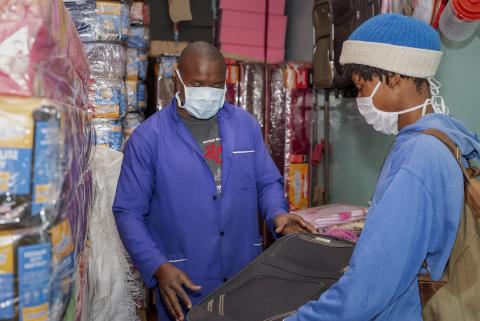 There is an urgent need for the United States to do more on the international stage to address COVID-19. Here’s what Congress can do.

Watch our video message to Congress

The House of Representatives passed the HEROES Act, a $3 trillion federal COVID-19 emergency stimulus bill, on May 15. While it includes federal aid for many vulnerable communities in the United States, the package does not include any funding for international assistance.

International humanitarian experts at Bread for the World and elsewhere have urged Congress to provide $12 billion in aid for countries sinking under the weight of the coronavirus crisis. Reports from UN-affiliated agencies indicate that 265 million people could face starvation of “biblical proportions" by the end of the year and half-a-billion people could be pushed into poverty by the growing global economic crisis. Many impoverished countries are facing this new crisis compounded by ongoing crises of food insecurity, fragile health infrastructure, and crushing debt.

As the United States faces an escalating health crisis at home, we cannot afford to ignore the situation among our neighbors beyond our borders. The spread of COVID-19 in developing countries will hamper the United States’ efforts to contain the pathogen domestically, impede global and domestic economic recovery, and intensify the political instability and human suffering that have contributed to high levels of migration in recent years.

Congress should support expanding a moratorium on debt service payments from indebted countries to international financial institutions to enable countries to increase spending on essential items to fight the pandemic. So far, the IMF canceled debt payments for the 25 poorest countries and the G20 agreed to put debt on hold for others. But this is not enough. Across 46 countries, debt payments for this year are currently projected to be 400 percent of their health budgets.

Congress should instruct the U.S. representative to the International Monetary Fund (IMF) to support, not block, issuance of $3 trillion in Special Drawing Rights (SDRs), an emergency financial liquid resource that is without any cost to U.S. taxpayers. To be clear, it costs absolutely nothing to the U.S. taxpayer for the IMF to issue SDRs.

So far in the House and Senate

In the House, the Robust International Response to Pandemic Act (H.R.6581), introduced by Representatives Jesus "Chuy" García, Jan Schakowsky, Mark Takano, and 13 other original co-sponsors needs to be part of forthcoming coronavirus legislation to ensure that developing countries will be supported by the International Monetary Fund (IMF) and other international financial institutions with the resources they need to confront this unprecedented global crisis.

In the Senate, the COVID-19 International Response and Recovery Act, introduced by a group of Senate Democrats led by Sen. Bob Menendez includes funding for FY2021 but not the emergency supplemental appropriations needed immediately.