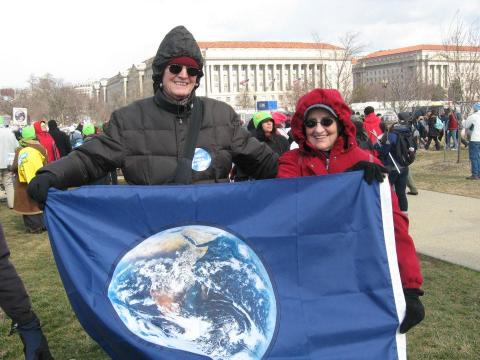 The following report was written by Sr. Mary Ann Smith, MM, who, with other Maryknoll missioners, Affiliates and staff members from the Global Concerns office, joined a multi-faith contingent organized by Sojourners and Interfaith Power and Light at the February 17 rally on climate change in Washington, D.C., attended by tens of thousands of people.

It was a clear, cold and windy day which would have prevented less informed and committed people from standing, jumping and marching for four hours. A roster of inspiring speakers and organizers reinforced the reasons why a line in the sand has been drawn to demand that President Obama block the Keystone XL pipeline and move forward toward responsible climate action. Participants circled the White House and back to the Washington Monument for a final send off to continue the struggle to protect our fragile planet for present and future generations. Standing in the midst of those who came often at great expense and sacrifice to support a cause much greater than any individual or group was challenging and inspiring.

Sen. Sheldon Whitehouse (D-RI) urged participants to keep the pressure on their legislators to demand responsible action on climate change. Congress, he said, is sleepwalking through this crisis and that is unacceptable and unconscionable. Billionaire investor Tom Steyer laid out reasons why Keystone XL is a bad investment. Chief Jackie Thomas of the Saik’uz people spoke about the toll tar sands development has on her neighbors and the tribal lands that are being destroyed in Canada. Van Jones said that Keystone XL will be the only decision of President Obama’s presidency that will matter 20 years from now. These and other speakers spoke loud and clear about the urgency of the climate crisis.

"By itself, Keystone won’t have much of an impact on the climate, but it is not happening on its own. The Keystone XL is part of the carbon infrastructure that will take us to dangerous levels of climate change," says Simon Donner, a climate scientist at the University of British Columbia. The only way that could be true is if "national interest" is equated with profits for the oil industry, according to Steve Kretzman of Oil Change International. Since the pipeline crosses international borders the president must sign a permit declaring it serves the "national interest." (Quote source: Climate rally draws ‘line in the sand’ on Canadian pipeline, Stephen Leahy, Inter Press Service.)

Following are excerpts from this reflection written by Ted Glick, National Campaign Coordinator of the Chesapeake Climate Action Network.

Rev. Lennox Yearwood, leader of the Hip Hop Caucus ... talks all the time about this being the climate movement’s "lunch counter moment." And, thank God, it looks like he has been prophetic.

"Lunch counter moment" refers to the point in 1960 when the African-American freedom movement took off. It did so when young black people all over the South began sitting in at segregated public lunch counters, refusing to leave until served. For these actions, they were beaten, spat upon, arrested and more by white racists and racist power structures, but their courage and nonviolent direct action galvanized a south-wide and then national movement which, five years later, forced the federal government to pass a Civil Rights Act and Voting Rights Act outlawing legal segregation. …

[A few reasons why the February 17 rally in Washing, D.C. possibly can be considered the climate movement’s lunch counter moment:]

Unity: The Sierra Club is to be commended for their courage in calling for this action right after the November election and for the resources which they threw into it, as is 350.org, the Hip Hop Caucus and many of the 168 organizations that both formally supported it and worked hard to mobilize. …

Diverse leadership: [Speakers included] Rev. Yearwood; ... Canadian First Nation leaders Chief Jacqueline Thomas and Crystal Lameman, and Van Jones ... Although the crowd did not have the full diversity needed, it is important that the surging climate movement is supporting and bringing forward leadership coming out of communities of color on this issue.

Not just the pipeline: The ... Keystone XL pipeline was the prime issue that brought this effort together, but it was much more. It was a vision of a future where our energy sources are clean, renewable and democratically controlled by the people, not dirty fossil fuel, corporate honchos. It is a vision which opposes all of the extreme energy extraction industrial processes: mountaintop removal, oil drilling in the Arctic ocean and in deep water offshore, fracking, as well as tar sands. Everyone understands that victory on the pipeline is just the first step, the turning point, towards what we urgently need.

Multi-tactical: Finally, it was striking to experience the activities which took place in the week leading up to February 17. It began with a civil disobedience action on [Feb. 13], close to 50 people locking themselves to the White House fence, highlighted by Sierra Club leader Mike Brune taking part, the first time in their 120-year history that they have done so. The next day, with Bill McKibben and Mike Brune there to offer words of support, U.S. Senators Bernie Sanders and Barbara Boxer publicly announced their introduction of a "gold standard’ fee-and-dividend bill that Boxer hopes will go to the floor of the Senate this summer…

The students who sat in at the lunch counters in February 1960 … were clear that to defeat segregation they would need to engage in essentially non-stop organizing and action. Today’s climate movement must do the same, and more need to figure out how they can do more on a personal level. We need to step up nationally coordinated actions at the scale of the problem, this year, this spring. …