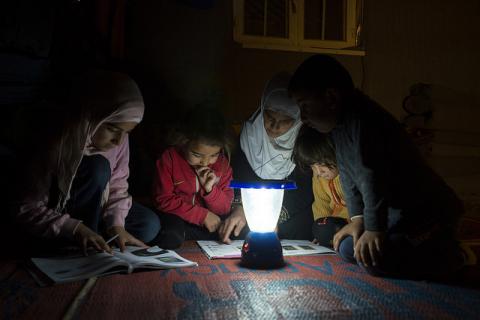 Civil society is taking new and creative action to move governments to follow through on their commitments made in the Paris climate agreement and to do more to address the urgent need to address climate change. The following article was published in the May-June 2016 issue of NewsNotes.

As the devastating impacts of climate change mount around the world, more and more people, communities, and governments are taking action to reduce greenhouse gases and make the change from fossil fuels to renewable energy. The signing of the Paris climate agreement on April 22, is the first time the majority of the world has agreed that the Earth is in a climate crisis and that we must act now to slow global temperature rise.

The Paris agreement is significant in a number of ways. In addition to including most every country on the planet, it sets a concrete goal of “holding the global average increase in temperature to well below two degrees Celsius, and to pursu[ing] efforts to limit the temperature increase to 1.5 degrees Celsius above pre-industrial levels.” Considering that in 2015 we were already one degree above, and future increases are already guaranteed from recent emissions, this is a very ambitious goal.

Another significant aspect of the agreement is its emphasis on respecting human rights in all responses to climate change. Too often we see communities facing challenges to their human dignity and territory from mitigation projects such as hydroelectric dams, biofuels, and forest protection projects.

The issue of finance was also an important one in Paris. Participating countries agreed to assist low-income, climate-vulnerable countries with funding, reiterating their commitment of 100 billion dollars per year to the Green Climate Fund.

A significant portion of the fund will come from private donors who have just begun to step up to their responsibilities with commitments to climate financing. Credit Agricole CIB, BNP Paribas, Bank of America, and HSBC have each made significant pledges. Unfortunately, many of these banks continue to fund fossil fuel projects as well. Private investors are taking independent action and quitting their investments in fossil fuel companies through the Fossil Fuel Divestment Campaign and Portfolio Decarbonization Program. Collectively, private investors have divested over four trillion dollars from fossil fuel corporations. To encourage the creation of cleaner energy, the Mission Innovation and Breakthrough Energy Coalition also made significant pledges for supporting research and development.

To encourage the U.S. to follow through on its commitment of three trillion dollars to the Green Climate Fund, many civil society groups and 120 faith leaders, including the Maryknoll Office for Global Concerns, urged Congress – through letters, emails, phone calls, and lobby visits – to pass President Obama’s budget request for a first payment to the fund. On March 8 we celebrated when the State Department confirmed that the U.S. sent $500 million to the Green Climate Fund.

Another important form of pressure on the government to take climate action is a historic lawsuit brought by 21 children against the government for violating the children’s constitutional and public trust rights by promoting the use of fossil fuels. The lawsuit, Juliana v. the U.S., has the potential to fundamentally change how the government responds to climate change.

The plaintiffs are 21 youth, ages 8 to 18, represented by Our Children’s Trust, a small NGO in Oregon (Juliana is the name of the first plaintiff, Kelsey Juliana). The children originally sued only the U.S. government, but a judge later granted defendant status to three mammoth business associations: the American Fuel and Petroleum Manufacturers (AFPM, representing big oil, refiners and petrochemical manufacturers), American Petroleum Institute (API, representing 625 oil and natural gas companies) and the National Association of Manufacturers (NAM, representing more than 14,000 manufacturing companies).

In their complaint, the children show that the government knew as early as 1965 that CO2 emissions from burning fossil fuels would cause global warming, yet continued to aid a massive increase in fossil fuel extraction. In fact, the International Monetary Fund has described the United States as the world’s top subsidizer of fossil fuels.

Similar cases are being tried in other countries. In a first victory, the Hague District Court ruled on June 24, 2015, in favor of the almost 900 plaintiffs and ordered the Dutch government to reduce the country’s carbon emissions by 25 percent below 1990 levels. Legal efforts like this are aided by the Oslo Principles on Global Climate Change Obligations which provides legal arguments within international, human rights law, national, environmental, and tort law that plaintiffs can use to process their governments.

The Juliana v. U.S. case passed its first hurdle on April 8 when Judge Thomas Coffin denied motions from the government and fossil fuel industry to dismiss the case. The next step will be a review of Coffin’s decision by colleague Judge Ann Aiken.

Photo: Children study by solar light in Jordan. Photo by Flickr/Roderick Eime and licensed in the creative commons 2.0.