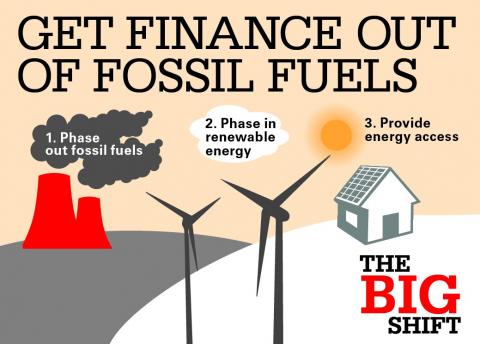 The Maryknoll Office for Global Concerns joined the Global Catholic Climate Movement’s Season of Creation prayer and action program for the month of September, which included supporting the Big Shift Campaign to call on the World Bank to move projects away from fossil fuels and toward renewable energy. The following article was published in the November-December 2017 issue of NewsNotes.

The Big Shift Global campaign, led by environmental, development, and faith communities, encourages publicly-funded multilateral development banks, such as the World Bank and Africa Development Bank, to shift all projects away from fossil fuels and invest in renewable energy. The campaign also calls on the banks to track and report their carbon footprint and create more energy access for economically marginalized communities.

According to two reports released during the World Bank’s annual meeting in October, the World Bank Group (including both private and public investments) remains last in terms of the ratio of renewable to fossil fuel energy project investments.

The first report, by the British climate change think tank E3G, examines self-reporting by multilateral development banks. In some cases, banks misrepresented nonrenewable projects as renewable energy projects. The second report, by Oil Change International, a D.C.-based research and advocacy organization focused on exposing the true costs of fossil fuels, excludes biofuels, biomass, natural gas, and large scale dams from the data since these projects have been shown to actually contribute to climate change or to be otherwise socially and environmentally destructive. Oil Change International found that only five percent of renewable energy projects created energy access for low-income residents.

Neither study includes projects funded through “financial intermediaries” as it is difficult to track such financing back to the banks. This means that the number of fossil fuel projects is likely greater than reported.

One example of this is described in an official complaint against the International Finance Corporation (IFC), the private sector lending arm of the World Bank. Nineteen Filipino communities and 100 citizen groups filed the complaint on October 11, accusing a Filipino bank, Rizal Commercial Banking Corporation, of using a $253 million loan from the IFC to finance construction of 19 coal-fired power plants. The IFC has provided this financing since 2013, the same year the World Bank announced it would stop funding coal-fired power plants.

Inclusive Development International, Bank Information Center, and the German environmental NGO Urgewald published a report in 2016 that documents the IFC financing coal-fired power plants numerous times through Rizal and other financial intermediaries. By following the trail of money, the report concluded that IFC-supported financial institutions have funded at least 41 new coal projects – either by supporting the facilities directly or the companies that own them – since the World Bank’s coal ban in 2013. The investigation tackled only a small portion of the IFC’s sprawling financial-sector portfolio. There are doubtless many more projects yet to be uncovered.

All projects receiving IFC financing should follow the IFC’s guidelines for environmental and social responsibility but the IFC conducts minimal oversight of financial intermediaries. According to Inclusive Development International, the IFC provided $40 billion in funding to all types of projects managed by financial intermediaries between 2011 and 2015. These projects represent more than half of the IFC’s lending portfolio, a proportion that has steadily increased over the past decade.

In 2016, Gloria Capitán, a 57-year-old grandmother in the Philippines, was murdered in her family’s karaoke bar for her activism against two IFC-funded coal-fired power plants that were contributing to respiratory and other illnesses in the province of Bataan. Inclusive Development International estimates that as many as 2,410 Filipinos die prematurely each year due to emissions from coal plants, which pollute the air, sea, fisheries and coral reefs. The Philippines is also one of the most climate vulnerable countries in the world, with super typhoons bringing massive destruction in recent years.

“We place our lives in the line of fire for standing up and fighting for our right to a healthy environment and against the dangers posed by dirty coal projects. Every day, we face the double whammy of dying from exposure to pollution and risking our lives in resisting these projects. But we will not be intimidated, ” said Father Warren Puno, parochial vicar of Our Lady of the Angels Parish and one of the community leaders against the proposed coal plant in Atimonan, Quezon Province.

The World Bank took a step toward the big shift during its annual meeting when its president, Jim Kim, announced that the bank will start reporting the net global greenhouse gas emissions from all of its projects. The new commitment means that, for the first time ever, the bank will measure, aggregate, and disclose data on the quantity of greenhouse gases emitted or avoided as a result of bank-funded projects. The bank still needs to go further and stop financing fossil fuel projects.