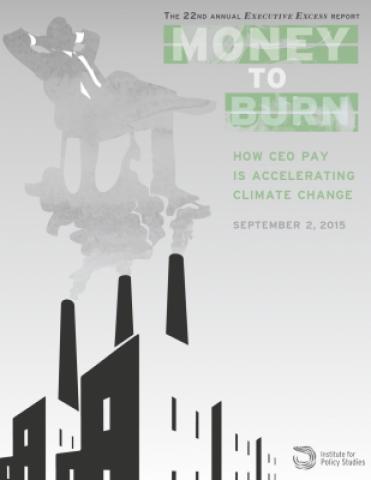 The following article, published in the September-October 2015 NewsNotes, was written by Chuck Collins, a senior scholar at the Institute for Policy Studies (IPS) and co-author of the report, Money to Burn. He is founding co-chair of DivestInvest.org.

Excessive CEO pay at the 30 largest U.S. public fossil fuel corporations rewards short-term actions, with disastrous results for the world’s climate, a new report finds. Pay trends are documented in Money to Burn: How CEO Pay is Accelerating Climate Change, a report published by the Institute for Policy Studies.

The highest-paid fossil fuel CEO is ExxonMobil’s Rex Tillerson, who raked in in $33 million in 2014, boosting his total compensation over the last five years to $165 million. ConocoPhillips paid CEO Ryan Lance over $27 million in 2014, an 18 percent pay increase over 2013. Chevron CEO John Watson is third highest with a $26 million paycheck in 2014.

Allocating $6 billion differently would double the current $3 billion U.S. pledge to the Global Climate Fund, to offset climate change in the most vulnerable nations. In the U.S., $6 billion could cover the cost of weatherizing the homes of 3.3 million low-income families or install 269,342 residential solar panels.

CEOs at the biggest oil, gas and coal corporations are rewarded for a short-term mindset in their actions. They receive pay increases for expanding carbon reserves and building unnecessary fossil fuel infrastructure.

These 30 fossil fuel corporations are leaders in an industry that is spending over $600 billion per year to locate additional fossil fuel reserves. Climate scientists have warned that we should cap carbon emissions to prevent Earth’s temperature from rising more than 3.6 degrees Fahrenheit. Taking this step would limit emissions to roughly 565 gigatons of carbon. At our current levels of consumption, we’ll surpass this marker by 2040.

The 200 largest fossil fuel companies, however, already have an estimated 2,795 gigatons of oil, gas and coal reserves. That’s five times the amount of carbon than can be burned without triggering irreversible and catastrophic climate change.

Most of that dirty energy needs to stay in the ground. The global energy industry must shift its investment away from efforts to drill and mine its untapped reserves of oil, gas, and coal, and move as swiftly as possible toward a new reliance on renewable energy options like wind and solar.

Perverse pay incentives also encourage big oil, gas and coal companies to build billions of dollars of unnecessary fossil fuel infrastructure in order to boost short-term profit horizons. These CEOs are rewarded for new pipelines and drilling platforms that lock us into fossil fuels at a time when our nation should be shifting investment into conservation and renewable energy.

Big fossil fuel uses its considerable lobbying clout and campaign cash to protect their subsidies and block alternatives. This includes lobbying Congress to protect an estimated $37.5 billion in annual subsidies for the fossil fuel sector. In 2014, the top 30 fossil fuel corporations contributed $4.4 million to congressional candidates who had either denied climate change science or expressed skepticism about it.

Corporate boards and shareholders could shift the incentives to reward long-term viability. CEOs could be rewarded not for finding new reserves, but for reducing carbon emissions. They could be encouraged to diversify energy sources toward renewables. Their deferred compensation could be tied to business health over a longer time horizon than two or three years.

Today’s chronic short-termism isn’t only bad for their shareholders, it’s lethal for the planet and all of us. Remaining hooked on fossil fuels will only increase the severity and frequency of summertime hailstorms, devastating droughts, and wildfires of biblical proportions.