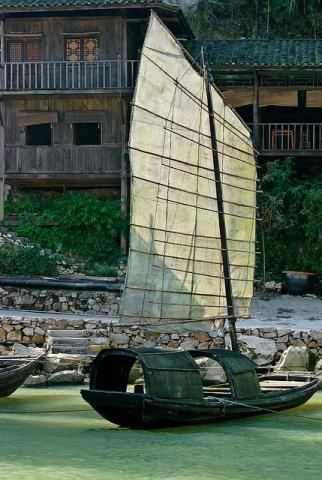 Maryknoll Sr. Marjorie Ann Bush returned to the U.S. on September 14 after making a short trip back to China where she worked in mission from 1999 until 2010. Sr. Ann Braudis interviewed Sr. Marjorie Ann regarding her sense of China’s movement toward sustainable development and whether or not a sense of peace is being strengthened through China’s development.

Sr. Marjorie Ann lived for four years in the Yangtze River Delta, much of which is undergoing fast-track economic development. It was from this area that Marjorie Ann drew an illustration that seems to be emblematic of issues of sustainability in China and globally. But first, the following provides some background for understanding her observations.

The Yangtze River flows from the Tibetan Plateau to China’s eastern seaboard. For thousands of years the Yangtze has been a conduit for moving valuable products from China’s interior to its heavily populated coastal cities and great harbors. The products wending their way to the coastline span an impressive array from agricultural goods to precious metals. Aside from transportable goods, the area has other assets, not least of which is its stunning natural beauty, traditionally a great lure for tourists and vacationers. Added to this, the ancient city of Nanjing is a mecca for the arts, particularly of the period of the Ming dynasty.

Unfortunately, notwithstanding its great resources, the area has known hunger within living memory. This point raises the question of how resources are used. When resources are used sustainably, the needs and rights of present and future generations of people are taken into account and planned for in the development process. If resources are not used sustainably, some people will be well provided for in the present and perhaps in the immediate future, but the basic rights of others may not be met now or in the future. Furthermore, when development is defined as sustainable, the development process takes into account equally economic needs, social justice and protection of the environment.

The case that Marjorie Ann recounted refers to a small householder faced with the loss of his property due to economic development that did not include social justice and environmental protection. According to Marjorie Ann, developers moved into an agricultural area and rapidly acquired all the small farms and homes in the area at prices disadvantageous to the owners. The small farms and homes were replaced by apartment buildings and commercial sites. However, one owner refused to accept the terms of the developer and remained defiantly in his house, determined to exercise his right to social justice. As time passed, all the land around the house was excavated, applying great pressure on the owner to sell under unfavorable conditions. (A building/residence in this situation is called a "nail house"; its owner/occupant is called a "stubborn nail." This scenario has been replicated in other parts of China and has gained much attention in the press and on the internet.)

Aside from illustrating the issue of social justice, this case draws attention to the environment. Land and water are needed to support life; large scale development projects contribute to the collapse of life support systems unless carefully planned, implemented and monitored. In addition, China’s arable land is scarce raising perennial questions about food security and the wisdom of converting fertile agricultural land into development projects.

Sadly, the development pictured in this case is destructive to the location’s natural beauty and deprives people of the expansiveness of soul found in the presence of beauty; in cultivated fields, in views of hills, water and sky. Finally, in Marjorie Ann’s view, growth that does not stand on the three pillars of economic development, social justice and environmental protection does not lead to peace. Rather, anxiety, discontent and violence are generated within the population.

As indicated above, the case described here is typical around the globe. Wherever there is unsustainable development, there are those who resist it with all their strength. The United Nations is responding to the grave concerns raised by rapid unsustainable development by engaging the nations and civil society in the formulation of Sustainable Development Goals (SDGs) that will come into effect in 2015. The SDGs will apply to all nations equally and will be concerned with the right to food and water as well as the need for energy, among others.

The National Bureau of Statistics in China has designated Nanjing as the city within the Yangtze River Delta with the greatest potential for sustainable development. Nanjing may be highly motivated to work toward this goal as it will host the 2014 Youth Olympic Games. The youth and their future hold humanity’s purpose in living sustainably today. (Learn more from this episode in PBS’s Journey to Planet Earth series.)

Finally, the words of theologian Elizabeth Johnson speak directly to the topic of sustainability and peace: "If we as church are truly following our risen Lord, making his historical concerns our own and committing our lives to the coming victory of the reign of God, then we are compelled to be involved in critical peacemaking and economic issues where the shalom and well-being of all peoples, and indeed of the whole earth are at stake." (Consider Jesus: Waves of Renewal in Christology, Crossroad, 1990).