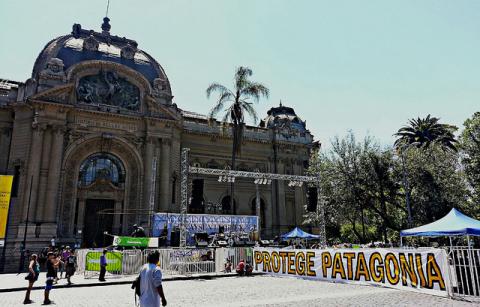 The following article was prepared by Richard Coaxum, an intern with the Maryknoll Office for Global Concerns’ Faith Economy Ecology project. It was published in the July-August 2014 NewsNotes.

On June 10, Chile’s government made a historic move in rejecting the proposal for an $8 billion dam, the HidroAysén, which was to be built to alleviate the country’s growing energy usage. The public and environmentalists celebrated the decision. The proposed project would have built five dams on Chile’s two largest rivers, the Baker and Pascua, in the Aysén region of southern Chile. Environmentalists note that the resulting transmission line from the dam would have an impact on 14 national parks and protected reserves thus displacing indigenous populations and scarring the nearly pristine landscape.

Photo from December 2012 demostration against the project from Greenpeace Chile

Patagonia, the region where the proposed project would have been built, is viewed by the Chilean people as a national treasure. Roughly 100,000 visitors a year come to Aysén to enjoy the pristine wilderness, accounting for between five to 10 percent of the regional economy. The Chilean Patagonia—from Pumalín south to Torres del Paine—generates $80 million to $120 million a year from eco-tourism. Villages like Puerto Bertrand, which lies where the Baker flows into the waters of Lago General Carrera, rely heavily on outdoor activities such as trekking, rafting, and fishing. Environmentalists argue that not only would the dam disturb the local environment, but it would have devastating impacts on the regional indigenous economy.

However this is not the only reason for the past eight years of demonstrations and protests in opposition to the proposed project. As the Chilean people and government soon discovered, the dam proposal was "lacking sufficient plans to accommodate those who would be displaced and the quantification of damage to the environment and wildlife was inadequate," said Environment Minister Pablo Badenier as he announced the proposal rejection. The negative press from the dam has also caught the attention of potential investors. Banco Bilbao Vizcaya Argentaria (BBVA), the large Chilean bank, announced in a statement that it is "not considering financing [this project] due to its high social and environmental risks."

HidroAysén’s own environmental impact assessment (EIA), which is required for government approval of mega-projects, failed to account for glacial lake outburst floods in the rivers, which can result from the reservoirs of water being introduced via volcanic activity, earthquakes, or simply melting because of rising temperatures. The glaciers, which were supposed to be a source of energy, have begun to recede at an exponential rate due to climate change.

As Patagonia Adventure Expeditions owner Jonathan Leidich notes, placing five reservoirs in the glacial lake would cut off fluid circulation of water, thus increasing the temperature of the glacial lake and the rate of glacial melting. According to Leidich, a glacial lake outburst flood could dump 100,000 cubic feet of silt into the reservoir, disrupting the functioning of the dam and displacing nearby residents.

With these environmental factors and with the lack of a relocation plan weighing heavily on the mind of Chilean people, it is unsurprising that a 2011 opinion poll done by the newspaper La Tercera reported that 74 percent of Chileans are against the HidroAysén (although 81 percent of the Chileans polled stated that energy production was indeed a priority moving forward for the country’s future.)

The project would also have brought 4,000 new workers into the county of roughly 5,000 residents. Most would live in Cochrane, a village of just 2,800. The community fears that the increased population from outside the community will have social impacts such as an increase in alcohol consumption, sexual assault, prostitution and crime. This is unfortunately a common problem in other extractives or mega infrastructure projects in the U.S. and globally.

Fortunately for Chile and opponents of the HidroAysén dam, Chile is blessed with the resources for a plethora of other clean energy options which could help to tackle the country’s growing energy needs without the dam. For example, in the deserts north of Santiago, Chile’s capital and largest city, there is the potential for solar, wind, and geothermal power to be developed.

A diverse set of alternative energy plants located nearer to Santiago and the more populated areas of Chile would also reduce transmission costs. Chile has plenty of options for renewable energy, but the HidroAysén, with the tremendous impact that it would have on a region thus far untouched by massive development, does not need to be one of them.