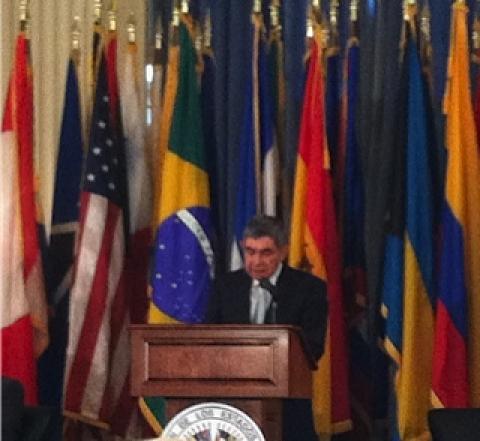 This August marked the 25th anniversary of the signing of the Esquipulas Accords that catalyzed the end to war in Central America. As they celebrate this historic event, Central American countries look to that legacy to find solutions to current issues of security, development and stability in the region. This article is from the September-October 2012 issue of NewsNotes.

Currently Central America is one of the world’s most violent regions — organized crime networks and gangs threaten to undermine countries’ capacity to deliver justice, protect citizens, and foster a sense of social inclusion.

What better time than now to evoke the successes of 25 years ago when, in the midst of intra-regional hostilities and several failed peace negotiations, Costa Rica’s then president Oscar Arias (a future Nobel Peace laureate) led the other Central American nations to a plan, debated in Esquipulas, Guatemala, to demilitarize the region. The strategy included folding all sides into democratic systems and downsizing armies. Weakening military control was pinpointed as the first step toward peace, but the accord also aimed to halt international players, like the U.S., from funding irregular forces like the contras.

In a 2000 Los Angeles Times interview, when asked how he was able to get leaders to agree to a peaceful solution, Arias said, “I appealed to their sense of history, to their responsibility of transferring to our children a peaceful Central America, to their dignity, not accepting what Washington was recommending.” Michael Shifter, president of the Inter-American Dialogue, commented that the Esquipulas Accord “revealed a degree of initiative and independence that the region hadn’t seen before, almost a defiance of the Reagan policy.”

Nicaragua recently demonstrated the initiative and independence characteristic of the Esquipulas Accords. In early September the School of the Americas Watch (SOA Watch) reported that Nicaragua became the first Central American country to withdraw its troops from the School of the Americas/Western Hemisphere Institute for Security Cooperation (SOA/WHINSEC), located at Ft. Benning, GA. At a meeting with SOA Watch delegates, President Ortega said that “the [SOA] is an ethical and moral anathema. All of the countries of Latin America have been victims of its graduates. The SOA is a symbol of death, a symbol of terror. We have been gradually reducing our numbers of troops at the SOA, sending only five last year and none this year. We have now entered a new phase and we will NOT continue to send troops to the SOA. This is the least that we can do. We have been its victims.” [For more information on the Nicaragua’s promise not to send soldiers to SOA/WHINSEC, visit SOAWatch’s website. ]

On August 14 the Organization of American States (OAS) hosted 25 Years After the Esquipulas Agreements: Opportunities and Challenges in Central America, a panel discussion that included the Oscar Arias and former president of Guatemala Vinicio Cerezo, along with leaders and analysts from the region, many of whom had been involved with the original Esquipulas process. It was at the OAS where Arias stated that the legacy of Esquipulas is “fertile” but also “inconclusive…. In Central America we have peace, democracy and development, but what we lack is quality in all these variables.” Arias professed that the future of the agreements is “dynamic,” and is being built by those who “try to forge a better future for their people,” by those who “have opted for diplomacy and understanding between nations as a tool of progress,” and with “hope, which must serve to encourage us.”