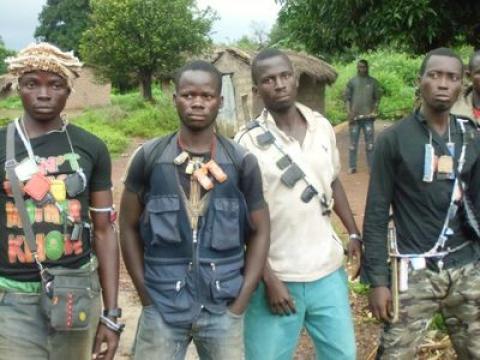 This report, published in the January-February 2014 NewsNotes, draws heavily on the November 19 testimony to the U.S. House Sub-Committee on Africa by Bishop Nestor-Desire Nongo Aziagbia of Bossangoa Diocese and vice chair of the Central African Catholic Bishops Conference.

In the past year, the Central African Republic (CAR) has fallen into chaos. Officials in the European Union and the United Nations have even raised the specter of a potential genocide in this land-locked nation of 4.5 million people. According to Jan Eliasson, UN Deputy Secretary General, the population is enduring suffering beyond imagination.

On November 19, Bishop Nestore-Desire Nongo Aziagbia of the Catholic Diocese of Bassanogoa delivered a very somber assessment of the current crisis to the House Subcommittee on Africa, Global Health, Global Human Rights and International Organizations. He stated that tens of thousands of people from his diocese were now sheltering in the diocesan compound in order to avoid the deadly violence occurring just beyond its walls. The reasons for their plight are rooted in the complicated political crisis that has engulfed the CAR.

Since winning independence from France in November 1960, the CAR has experienced a long series of coups and corrupt governments. In the past months the state has collapsed; the country is teetering on the edge of anarchy. In March 2013 Michael Djotodia and an alliance of four political parties called the Seleka drove democratically-elected President Francois Bozize from power. In his push to power, Djotodia recruited 20,000 mercenary forces from neighboring Chad and the Darfur region of Sudan to assist in the coup. According to Bishop Nongo, these troops make up about 90 percent of the Seleka forces. These foreign mercenaries are now carrying out a countrywide criminal operation that, according to the International Crisis Group, has no other purpose than personal gain.

In recent months the crisis has metastasized into a more dangerous conflict with religious overtones. The CAR is estimated to be about 80 percent Christian and 12 percent Muslim (as is Djotodia). Most of the Seleka fighters allied with the transition government are Muslims. Christians have armed themselves into self-defense groups called anti-Balaka and are retaliating against their Muslim neighbors. According to a December 5 press statement by the White House, both of these groups have committed shocking and horrific atrocities that demand a swift response by the international community. Djotodia, who took the position of president, has disbanded the Seleka militias and has denied the claim by French Foreign Minister Laurent Fabius that the country is on the verge of genocide.

On December 5 the UN Security Council passed Resolution 2127 which provides a Chapter VII mandate to the international forces present in the CAR: protect civilians, restore security, and ensure humanitarian access. It calls for contingency planning in the event that a UN peacekeeping operation is deployed. Such an operation would require around 9,000 UN peacekeepers, but this seems unlikely at present given the one-year mandate to the present peacekeeping force, the African Union-led International Support Mission in the CAR (MISCA). which is composed of mostly Chadian troops, as are most of the Seleka fighters. Bishop Nongo and others are calling for more troops from neutral African countries so as to prevent Chad from pursuing its own interests in the CAR. Resolution 2127 also allows French troops that are already guarding the airport in the capitol of Bangu to take all necessary measures to support the African peacekeepers. Within days of the passage of the Resolution 2127 the United States began to airlift about 800 more French troops from Burundi to the CAR. These troops claim they will begin to disarm all armed groups, peacefully at first, but with the use of force if resisted.

The conflict in the CAR is rooted in the exclusion of its citizens from effective participation in the government. What began as a response to bad governance has now escalated into a regional conflict with mercenary forces setting up a de facto foreign occupation, and has also added a dangerous sectarian character. And, as with many conflict around the world, the plundering of precious minerals – gold and diamonds – plays an important role.

But despite the growing sectarian violence, commercial plundering of resources and continued political exclusion, the people of the CAR are actively seeking assistance from the international community that will help them establish peace and security. They are eliciting support for internal processes aimed at a thorough program to end violence, establish a humanitarian assistance program, develop a political transition process, and initiate reconciliation between Christians and Muslims. The visits to the U.S. Congress and the UN by Bishop Nongo and other religious and civil society leaders underscore the Church’s commitment to active peacemaking in Africa, efforts that should be supported by churches worldwide.