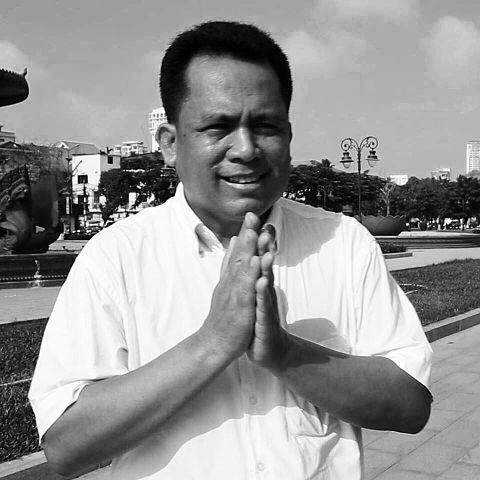 The following reflection on the assassination of Kem Ley in Phnom Penh on July 10 was written by Charles McCarthy, a Maryknoll Lay Missioner in Cambodia. This article was published in the September-October 2016 issue of NewsNotes.

Cambodians continue to grieve the death of Kem Ley, one of the country’s most prominent political commentators and an outspoken critic of the government.Kem Ley was shot dead while drinking coffee outside of a gas station in Phnom Penh on July 10. The assassination of this 46-year-old father of four and popular pro-democracy voice is the latest and by far most shocking in a string of crackdowns on critics of Prime Minister Hun Sen in the lead-up to the country’s 2018 elections.

A few days before his death, Kem Ley spoke on Radio Free Asia about a report by Global Witness which describes how the prime minister and his family control a range of businesses worth more than $200 million for their own interests and put the country in an “economic stranglehold.” Some Cambodians have described Ley as a “national hero.”

Kem Ley was a champion of free speech in a country where that right, at times, seems to exist only on paper as an article in the Constitution. Indeed, the same week of Ley’s funeral, I read in a Cambodian newspaper that a court in Cambodia rejected the appeal of a University student who was sentenced to one and a half years in prison for asking on his Facebook page if anyone would dare to engage in a nonviolent revolution with him and for calling the King “stupid.”

It is hard to articulate the importance of Kem Ley’s death to the Cambodian people. The closest analogue I can think of may be for African Americans, the assassination of Dr. Martin Luther King. One Khmer friend of mine told me she couldn’t sleep for two nights in a row because of her sadness and fear of what looms ahead for Cambodia. She told me that Kem Ley was the “last hope for my country.”

Currently I am working as a psychologist with Maryknoll Associate Priest Kevin Conroy, a fellow trained psychologist with the Maryknoll Mental Health Team in Phnom Penh. I have heard that several local NGOs let their employees go home after Ley’s assassination because they were too despondent to work. Father Kevin held a group bereavement session at the International Organization for Migration to help employees process their grief. He also opened the doors of his treatment center to activists and all those who may be suffering from traumatic symptoms because of the murder.

An article in the July-August 2016 issue of NewsNotesdescribed how the ruling party in Cambodia, the Cambodian People's Party, has made aggressive moves in recent months that international groups describe as a campaign to intimidate political opponents before the 2018 election. In March, the UN Special Rapporteur on the Situation of Human Rights in Cambodia, Rhona Smith, said the contentious and at times violent political situation has pushed Cambodia “close to a dangerous tipping point.” The situation continued to deteriorate in April and May, with the police attempting to arrest opposing political party leaders and blocking demonstrations, prompting Maryknoll missioners in Cambodia to join 40 other international NGOs in signing a public appeal to the government of Cambodia to stop human rights abuses. You can read the article and public appeal at http://bit.ly/2al64zc.

The assassination of Kem Ley in July takes the crackdown to a new, shocking low.

Nonetheless, one could not but be inspired by the courage of the tens of thousands of Cambodians who attended Kem Ley’s funeral procession on July 24. People lined the streets of Phnom Penh, many holding portraits of Kem Ley. Estimates of the number of people vary widely from 300 people (Cambodian
government) to 2 million (Radio Free Asia). Having attended the funeral procession with some friends, I believe Radio Free Asia’s estimate is more accurate. Indeed, so many people showed up for the funeral procession that the government in a panic called the news stations and ordered them to “stop reporting on murders.” I feel the unprecedented turnout helped re-ignite in people the hope that seemed to be extinguished on the day of his death.

Photo: Kem Ley in Phnom Penh, Cambodia, on July 13, 2016. Photo by Hengthona and licensed in the creative commons 4.0 via wikimedia.