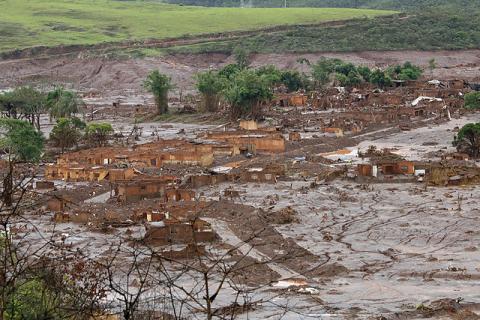 Southeastern Brazil has been devastated by toxic mud due to a dam that burst at an iron-ore mine in November. Brazil is calling it the worst environmental disaster in its history. The following article was published in the January-February 2016 issue of NewsNotes.

A disaster of truly epic proportions began on November 5, near Mariana in southeastern Brazil. A dam securing a large tailings pond (where undesired rocks, sediment, and chemicals from mining processes are stored) breached, releasing a wall of 62 million cubic meters of toxic mud and water.

The avalanche of toxic sludge buried a nearby town and poisoned hundreds of miles of the River Doce that provides water to hundreds of thousands of people. The disaster has exposed the inadequacies of government regulation of mining operations and is part of a global trend of worsening mining disasters.

Due to the surprisingly low number of fatalities for such a large accident (17 dead and two missing) and the fact that the Paris terrorist attacks happened soon after, the disaster has received little public attention. Yet the effects from the accident are massive. The town closest to the breach, Bento Rodrigues, was buried under many feet of mud, erasing it from the map. The mud flooded into the River Doce and turned the entire river brown.

The next most affected city is Governador Valadares, inhabited by 280,000 people. The Governador Valadares municipal government cut off the water supply, leaving people dependent on trucks bringing in water of questionable quality. Tens of thousands of people who depend on the river for their livelihoods have also suffered losses.

The Brazilian water agency, Agencia Nacional das Águas, said that the presence of mercury, arsenic, copper, and zinc in the water make it untreatable for human consumption. The river passes by at least 23 cities, leaving half a million people without water service.

More than 300 miles of river have turned dark brown with floating debris. The water has become so dark that sunlight cannot penetrate to the river floor, thus stopping the photosynthesis of algae, and resulting in such low oxygen levels that life cannot be sustained.

Perhaps even more concerning is the effect the disaster is having on the nutrient-rich mouth of the River Doce. The toxic mud is causing serious problems where the river reaches the Atlantic Ocean, which is one of the most important spawning points for fish around the world.

Unfortunately, the effects of the disaster are likely to remain for decades. For life in the river to return, the mud will need to thin out and drain to other areas. This can only happen with rain. Yet the region is in the midst of a severe drought, which will seriously delay the recovery.

The United Nations criticized the government of Brazil’s reaction to the disaster. Three weeks passed before the government released any information about risks from the contents of the mud. There was no central government spokesperson providing information, which resulted in conflicting statements from local, state and federal governments and agencies.

Samarco, the mining company responsible for the disaster, has reiterated that its operations were licensed and had in fact been inspected in July, and the dams holding the tailings ponds were reported to be “in a condition of total security.” The Guardian reported, “The state body responsible for monitoring the country’s dams, the National Department of Mineral Production, checked each of them only once every four years… and only has 220 inspectors charged with monitoring 27,293 sites nationwide.”

The disaster in Mariana is part of a larger and worsening mining reality around the world. An interdisciplinary study of mining waste spills, released in July, shows that mining waste spills are growing in size and severity. “Half (33 of 67) of serious tailings dam failures in the last 70 years occurred in the 20 years between 1990 and 2009.” They tie the increased rate of failure with the increasing use of extra large tailings ponds, a cost-cutting measure.

There are safer ways to store or dispose of the refuse from mines, but they are more expensive than tailings ponds and companies will not use them on a large scale unless required. With already weakened economies, few governments are likely to pass laws that will make their minerals more expensive internationally.

Photo: The town of Bento Rodriguez after the disaster. Photo by Senado Federal / Licensed CC BY 2.0