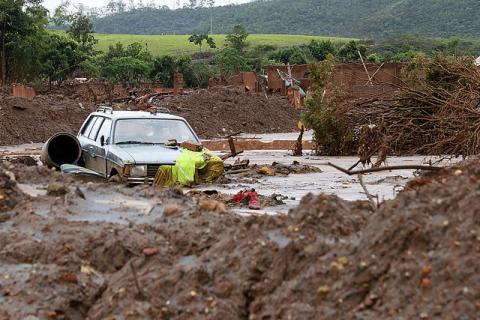 The following article, published in the March-April 2016 issue of Newsnotes, is an update on the environmental crisis in Brazil caused by a dam that burst in November, killing 17 people, displacing thousands, and polluting the River Doce with toxic mud. See our previous article, Brazil: Worst environmental disaster in history, in the January-February issue of NewsNotes.

Since the  devastating mining disaster in November, governmental and non-governmental groups in Brazil, as well as Samarco, the company responsible for the mine, have issued statements and reports on the causes and effects of the disaster. Samarco is defending itself on a number of fronts while the two principal owners of Samarco, Australian BHP Billiton and Brazilian firm Vale, have so far avoided any charges or responsibility. The human and environmental effects continue to be severe.

Initially, the Brazilian government announced it would fine Samarco the equivalent of $265 million. Weeks later it increased the fine to nearly $5 billion and started efforts to charge Samarco for the cost of temporary housing for displaced residents. In a rare exception, Brazilian police are seeking a court order to arrest six Samarco executives for alleged negligence. The police chief of Bento Rodrigues, the town nearest the dam that was buried under toxic mud, told a newspaper in Sao Paulo that there is enough evidence to charge Samarco executives with homicide. “The crime of homicide occurred, we will decide if it was voluntary or involuntary,” police chief Rodrigo Bustamente said to reporters.

Samarco also faces lawsuits filed by thousands of people who lost their livelihoods along the River Doce. A rainstorm nearly three months after the disaster led to a mudslide of residue materials that required evacuating workers at the mine, though the mudslide did not go beyond  the Samarco property.

Independent investigations have uncovered irregularities on the part of Samarco that made the disaster worse. A report by the United Nations Working Group on Business and Human Rights said that more timely action could have saved lives and possessions. The company had no audible alarm system, though it is required by law. Despite a 10-hour window between the breach and the mud reaching the nearest town, neither Samarco nor local government agencies issued an official warning to residents about the impending disaster. Samarco had a “dam emergency action plan” in place that included simulations with downstream communities, but they did not carry them out. Ultimately, the company lacked qualified personnel to respond to the disaster.

Unfortunately, the environmental effects of the spill are likely to remain for decades. “[The] mud will form a very hard cover due to the presence of iron,” said Leila Menegasse, professor at the Geosciences Institute of the Federal University in Minas Gerais. It will be difficult for rain to penetrate it and loosen the mud.  Also, the mud will cover vegetation and make the area sterile for a long time.

Organizations aiding affected communities report that diarrhea and vomiting, respiratory problems, skin diseases, and conjunctivitis from contact with the mud and dust are common. The biggest problem most survivors are facing is the trauma of losing homes and livelihoods. “The first thing that came to me when I saw those fish dying, was, my life is over and my river died, said Benilde Madeira, a local fisherman. “I don’t know how I will pay my bills, I don’t know how I will survive. I don’t know, I don’t know, I just don’t know.”

Unfortunately, Maryknoll missioners hear stories of suffering due to environmental disasters in many countries. The fundamental driver behind so much destruction is humanity’s tendency to consume more and more. Mines like this only exist to satiate this demand. Cellular phones, computers, even solar panels and wind turbines are made of metals dug up in mines around the world, all too often in precarious and dangerous conditions.

Photo: An abandoned car in the village of Bento Rodrigues in November. Photo by Senado Federal and licensed in the creative commons 2.0.