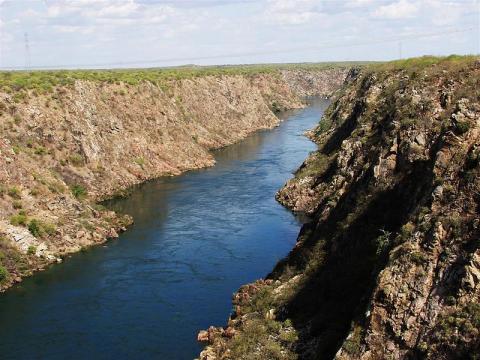 The following piece was written by Flávio Rocha, a Maryknoll lay missioner in Brazil, and was published in the January-February 2014 NewsNotes.

In 2004, Brazil’s then President Luiz Inacio Lula da Silva announced the São Francisco River Diversion Project, followed by the beginning of the construction of the canal in 2005. Immediately, leaders from social movements expressed their concerns. Initially, the government stated that the almost 400 miles of canal would be built to take water to more than 12 million people in the northeast, but that was not what was written in the official project. In fact, critics say, only 30 percent of the water will be directed to humans and animals in the region and the other 70 percent will be used for irrigation of fruit trees such as mango, coconut and banana, mostly for exportation. The canal also crosses over indigenous land without their permission, which is against the Brazilian Constitution, and will relocate many families, some of them already relocated more than 20 years ago by the construction of the Itaparica Dam (one of the eight dams built on the Sao Francisco River course).

Specialists in the area note that the government has a better project for the region called Northeast Atlas Project. It consists of a rigorous study made by researchers from some Brazilian universities on different ways to provide clean water for more than 40 million people in the northeast. In many cases, the large landowners in the region have appropriated the water that was supposed to serve the population. It is important to note that the Northeast Atlas Project implementation will cost less than $2 billion instead of the $4 billion budgeted for the São Francisco River Diversion Project.

The São Francisco River is so important for the people who live in the northeast of Brazil that it is called the River of National Integration. It runs through five states located in the most populated semi-arid area in the world. (More than 22 million people live in this area, the so-called Sertão of Brazil). The Sertanejos, as the people who live in that area are called, are so connected to the São Francisco River that they have created hundreds of myths, songs and poems to honor the Velho Chico (the Old Chico), as the river is tenderly called by them.

The Sertão of Brazil suffers from periodical droughts that force many people to migrate to big cities like Rio de Janeiro and Sao Paulo. However, this is only part of the problem. Some families have been running the region, politically and economically, for decades. As a result, the northeast region has the worst statistics in areas such as land distribution, literacy, infant mortality, teenage pregnancy, unemployment, etc. The mainstream media tries to convince the Brazilian population that the only issue is the lack of access to water, although the northeast had more than 70,000 dams, ponds and reservoirs built in the last century to fix that problem.

In protest against the project and concerned about the river, Dom Luiz Flavio Cappio, bishop of the Diocese of Barra, located in the state of Bahia, held an 11-day hunger strike in 2005. At that time, not many people outside of the northeast of Brazil were aware of the consequences of this project. Dom Cappio stated that he does not like the expression hunger strike, but if he would say that he was fasting and praying it would not cause the same impact. In a speech for the Brazilian bishops at the 46th Bishops Conference, he said, "Jesus teaches us that when the enemy is very strong and powerful, just prayer and fasting are able to confront it." His nonviolent action made such an impact on Brazilian public opinion that President Lula da Silva asked him to stop it and meet with him at the presidential palace. During that meeting, the president promised him that the project would be better discussed with the Brazilian society.

Unfortunately, that did not happen. The canal construction continued and the media portrayed the government project as the solution for all the historical social problems of inequality in the northeast. Worse than that, the government promised thousands of jobs in an area known for sending people to work in cities like Rio de Janeiro and Sao Paulo, undermining the resistance of non-governmental organizations and social movements.

Tired of waiting for the government to fulfill its promises, Dom Cappio started another hunger strike in November 2007. The bishop prayed and fasted for 24 days. During those days, he received the visit of many leaders from different Christian denominations, activists, artists who have interest in environmental and social issues and politicians who opposed the project from all over Brazil, but he was especially moved by the thousands of people who came to pray with him every day in support of his prophetic action.

On December 21, 2007, on his 23rd day of fasting, the Brazilian Supreme Court voted for the permission to continue the canal construction. Dom Cappio’s family, friends and aides convinced him to stop his hunger strike and he consented. As it happens in many similar cases, his defeat was his victory. Many groups throughout the country started organizing people to discuss the project, inviting experts to explain it and its impact on the river. The people who have been moved away from their land because of the canal are organizing themselves to demand their rights. As for Dom Cappio, he is still very committed to save the São Francisco River and to improve the lives of those who depend on it. He won the Pax Christi International Peace Award in 2008 "for his nonviolent action in favor of the fisher folk and river inhabitants endangered by the São Francisco river transposition project, as well as to the local community itself that was so active in the movement against the river transposition project." He also won various other honors in Brazil and Europe for denouncing the project and defending better ways to develop that region as agro ecology, for example. Even though he failed to stop the canal construction, his actions sparked the more general debate about the "development" of the northeast through megaprojects that often hurt the most marginalized people of society and the environment.

In spite of the promise to have the canals done by 2010, currently only about 50 percent of the project is ready. Current President Dilma Rousseff announced that she hopes to be able to finish it by 2015.