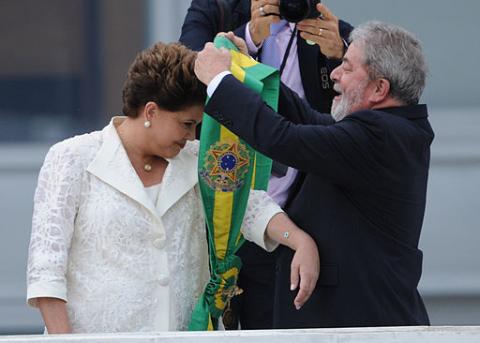 Over the past year, news from Brazil has been dominated by different corruption scandals, especially one involving the energy corporation Petrobras. Within Brazil, national news programs and newspapers dedicate extensive coverage to the scandals, which has contributed to growing anger toward President Dilma Rousseff and her affiliated Workers Party (PT). Millions of Brazilians are even calling for the military to intervene in what appears to be a corrupt government running out of control. But reality may be different than what is being reported.

The biggest scandals are the Mensalão (“Big monthly payment”) where high level members of the PT were found guilty of funneling money from public companies to members of Congress in exchange for voting with the Lula administration and the long-running Petrobras scandal, commonly called the Car Wash scandal, where executives of the semi-public corporation are accused of inflating contracts to divert the extra money into campaign funds of various political parties. The Mensalão scandal resulted in the imprisonment of a number of leaders of the PT, including key advisors of President Luiz Inácio Lula da Silva. The Petrobras scandal currently is being investigated, with the treasurer of the PT already indicted and others likely to be brought to trial.

Ironically, these wrongdoings are coming to light in large part due to a series of important measures taken by Rousseff and former president Lula (also of the PT) to investigate and prosecute corruption. Major media outlets in Brazil, meanwhile, emphasize the involvement of members of the PT while ignoring the involvement of opposition parties and other larger scandals.

The Institute Alvorada, a collective of government workers from various departments, explains why no administrations have taken on the issue of corruption, even though it has long been widely recognized as a serious problem.

“In Brazil, for centuries, the government did not have the necessary political will to tackle the problem because to investigate and bring to light cases of corruption often causes political crises, increasing society’s perception that [it] is growing, even when what happens is just the opposite.”

This is clearly happening today as, while the PT is described as a hopelessly dishonest party in most media outlets, especially social media, it has actually taken a number of very significant measures to rein in corruption that are having positive, concrete effects.

Soon after taking office, former President Lula created the General Controller of the Union (CGU in Portuguese), a cabinet-level entity responsible for combatting and preventing corruption. The CGU has carried out surprise audits of close to 40 percent of municipal governments as well as auditing all major federal programs like the Bolsa Familia, a subsidy for low-income families, and spending for the 2014 World Cup and 2016 Olympics. In the first 10 years of operation, 4,577 federal workers were fired, including high-level administrators. All the names of those expelled are listed on the CGU’s website as well as the full content of the different audits. The site also contains a list of all companies that have been suspended from receiving government contracts due to illegal activities. Finally, the CGU created an extensive website that shows federal government spending to an impressive level of detail compared to most countries with similar sites. The website is considered by the United Nations to be one of the five best anti-corruption measures in the world.

The Lula government granted more autonomy to the federal police to root out corruption. During the last three years of Fernando Henrique Cardoso’s presidency (January 1995-January 2003), the federal police carried out a total of only 20 special operations against corruption, while during the Lula and Rousseff administrations they have averaged close to 200 each year. In 2013 alone they enacted 296 special operations. More than 2,393 government workers have been imprisoned as a result.

The Attorney General is the only person who can accuse the president, ministers or members of Congress of a crime. As the president can appoint anyone s/he chooses, regardless of his or her qualifications, most have traditionally appointed a friend they could trust not to investigate them or their party. Cardoso, for example, appointed Geraldo Brindeiro, a personal friend and cousin of then-Vice President Marco Maciel. Brindeiro came to be called the “Drawerer-in-chief” for his tendency to put criminal investigations of politicians in the drawer and never look at them again. Brindeiro followed up on only 60 of the 626 criminal investigations that were referred to his office. The Lula administration pushed for changes long demanded by police and judicial organizations, so that now, the Attorney General must come from the ranks of state and/or federal police systems and have appropriate qualifications and experience.

In 2011, President Rousseff signed the Law of Access to Information, a project proposed to Congress by Lula in 2009. Similar to the Freedom of Information Act (FOIA) in the U.S., the law opens all government information to the public. The law has been fruitful in that since May 2012, almost 165,000 requests for information were sent to the federal government with 98 percent receiving responses within an average of 13 days. This is much different than the FOIA experience in the U.S., where responses can take months or even years.

Despite these significant advances in rooting out corruption, to read any newspaper, to watch television news or to browse Brazilian social media sites, it would appear that the PT is the most corrupt political party in Brazilian history. There is minimal reporting about the advances against corruption, and a strong emphasis on incriminating stories against the government.

In a meeting of Fecomercio, the federation of commercial businesses, Maria Judith Brito, president of the National Newspaper Association and executive of the Folha de São Paulo, the country’s second largest newspaper, said, “[T]he media are, in fact, doing the opposition position of this country, as the opposition is deeply weakened.” And there are ample signs of this bias in their reporting.

Articles about the Petrobras scandal always emphasize the role of the PT and allied parties, ignoring the participation of opposition parties. For example, a front-page article in the Folha de São Paulo is titled “Donations of those investigated in the Car Wash [scandal] prioritize PP, PMDB, PT and opposition.” Yet examining the data in that same article shows that opposition parties actually received more money than those allied with the government. And it is only in the last of 17 paragraphs that parties of the opposition are even briefly mentioned.

A leaked memo sent to directors for all Globo television stations, by far the largest and most influential network in the country, shows the planned bias in their reporting on the Petrobras scandal. The memo urged the directors to “review your video tapes with attention! Let’s not broadcast any mention of Fernando Henrique,” referring to testimony that day from a witness saying that bribes were received during the Cardoso administration as well.

Even Reuters, thought by many to be less ideological and more neutral in its reporting, published a piece on the scandal without removing a somewhat incriminating note from the reporter to the editor. At the end of a paragraph referring to this same testimony that bribes were made before the Lula administration, the reporter wrote in parentheses “(we can remove this if you think that’s better).” Reuters later apologized for publishing the article without removing the internal note, but made no mention of, or apology for, the bias that the note implied.

As the Petrobras scandal came to light, its stock price began to fall and Brazilian media focused heavily on this fact, though they failed to report that the stock prices of all publicly traded oil companies were plummeting due to the commodity’s falling price. The same media has failed to focus on the rapid rebound in the price of Petrobras’ stock since March, recovering more rapidly than its competitors.

A study from the University of Rio de Janeiro showed that during the 2014 presidential election season, the National Journal (TV Globo’s national news program) aired 82 minutes of negative reporting on President Rousseff, with only three minutes of positive reporting. Meanwhile, other candidates received fairly balanced reporting.

Finally, while Brazilian media have focused on the Petrobras scandal, they have practically ignored much larger scandals in terms of their effect on government coffers. Two recent tax evasion scandals are Zealots, in which corporations (including Ford, Santander and BankBoston) allegedly paid government officials to evade taxes and the recent release of information about 8,667 secret bank accounts held by Brazilians in Switzerland.

The losses to government coffers from tax evasion schemes like this are estimated to be from seven to 25 times larger than those lost due to corruption. While Brazil is ranked as the 69th most corrupt country in the world by Transparency International, the International Tax Justice Network reports that only Russia loses more money from tax evasion than Brazil.