Brazil: Bolsonaro and the COVID-19 Pandemic 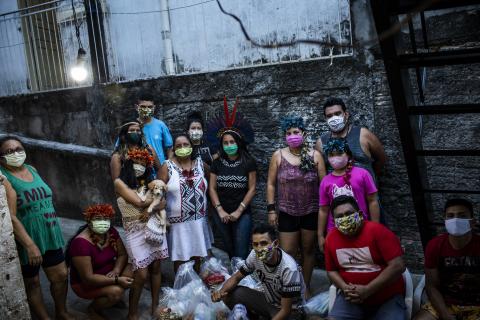 David Kane, an MOGC staff member in Brazil and a returned Maryknoll Lay Missioner, explains how a new study highlights the impacts of President Bolsonaro’s actions on the trajectory of the COVID-19 pandemic in Brazil. This article was published in the March-April 2021 issue of NewsNotes.

A new study by researchers at the University of São Paulo and an organization called Conectas Derechos Humanos closely examines the Brazilian federal government’s response to COVID-19 and concludes that the Bolsonaro administration not only failed to control the virus through “incompetence and negligence,” but deliberately undermined efforts by other government officials to control it as well as strategically promoted activity that spread the virus.

The study examines hundreds of resolutions, laws, and decrees by the federal government put in place since March 2020. The researchers demonstrate how these actions led to the uncontrolled spread of COVID-19 in Brazil and the staggering COVID-19-related death toll of 240,000, the second highest in the world behind the United States.

President Jair Bolsonaro, a great admirer of former U.S. president Donald Trump, largely followed President Trump’s lead on management of the coronavirus, from downplaying its seriousness to promoting unproven medical interventions as solutions and striving to open the economy at all costs. When it became clear early on that the Bolsonaro administration was not planning to mobilize the federal government to confront the crisis, Congress and state and municipal governments began to implement measures to contain the virus.

The report demonstrates how President Bolsonaro’s response was to undermine these efforts wherever possible. When some states declared travel restrictions to and from their states, Bolsonaro declared them to be illegal. When quarantines were initiated, temporarily closing all “non-essential” work, Bolsonaro published a decree widening the definition of essential workers to include beauty salons and barber shops, sports gyms, non-specified industrial activities, and more. When Congress passed a law extending emergency relief to a list of informal workers including taxi drivers, street vendors, waiters, hairdressers, etc., Bolsonaro quickly vetoed the law. Measures to require the use of masks in public buildings or the availability of hand sanitizer were also vetoed by the president. Luckily, some of these vetoes were overturned by Congress and others declared unconstitutional by the Supreme Court, but many remain in effect.

Bolsonaro has also starved many entities of the resources needed to respond to the virus. His vetoes have diverted more than R$9 billion ($1.8 billion) away from investments in science, technology, and innovation, hampering efforts to develop a Brazilian vaccine even though Brazil has an extensive network of laboratories capable of doing so. The National Health Council complained that more than R$8 billion ($1.6 billion) appropriated by Congress to fight the pandemic has not been sent to states and municipalities which are encountering shortages of basic supplies. Instead of ramping up these investments for the following year, the 2021 budget contains large cuts for the science, technology, and research sectors.

Bolsonaro’s actions are thought to have directly contributed to the disproportionately high death toll within Indigenous communities. The president vetoed various attempts to protect Indigenous communities during the pandemic, including through guaranteeing access to drinking water, personal hygiene supplies, ventilators, and hospital beds.

The lack of federal action and the Administration’s subterfuge of others’ efforts to contain the virus led civil society organizations to take action to try and fill the gap. The Landless Workers’ Movement, the largest social movement in the country, has delivered thousands of tons of food to marginalized communities and produces low-priced handmade masks and alcohol gel.

While many church gatherings have been suspended, Catholic and other denominational communities have remained active, gathering food and other donations for families most in need. Some Maryknoll missioners working in Brazil have adapted their ministries to fit the needs of those most impacted, such as Maryknoll Sr. Efu Nyaki, who works in trauma healing and has sought to provide psychological support for those most impacted by the pandemic.

On January 26, the Ample Christian Front, an alliance of religious entities including the National Justice and Peace Commission, a part of the National Conference of Brazilian bishops, submitted a request to the House of Representatives calling for the impeachment of President Bolsonaro.

According to pastor Romi Marcia Bencke, representative of the National Council of Christian Churches in Brazil, a co-signing organization, “the principal motivation” of this request is “the total absence of initiatives by the government to diminish and contain the impacts of the pandemic.”

With Bolsonaro’s favored candidates winning recent elections for the leadership of both houses of Congress, it appears unlikely that this, or any of the more than 60 impeachment requests, will move forward. Bolsonaro remains unchastised, and the country remains in crisis.