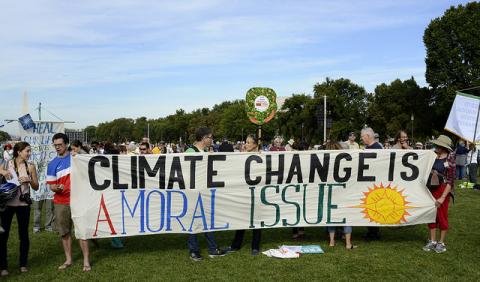 Since day one, President Joe Biden has recommitted the United States to climate action, signaling that the United States is “back in” the fight against this gravest of threats. This article was published in the March-April 2021 issue of NewsNotes.

On February 19, the United States formally rejoined the Paris Climate Agreement, which was hailed as a welcome first step by climate activists and world leaders. In his first weeks in office, President Joe Biden has taken a number of subsequent steps to further his agenda to robustly address climate change during his presidency.

President Biden is taking a “whole of government” approach to climate change within his Administration, in recognition of the urgency and scope of the issue. He has directed 21 federal agencies to meet on a newly established National Climate Task Force and is also expanding the purview of climate into new policy spaces, such as the National Security Council and a rumored high-level position at the U.S. Treasury.

President Biden named Gina McCarthy, former Environmental Protection Agency administrator, to the new White House Domestic Climate Policy Advisor position. John Kerry, the Obama-era Secretary of State who played an active role in the Paris Agreement negotiations, will serve as Climate Envoy, a new position. Notably, Biden, McCarthy, and Kerry are all Catholics, and Kerry and Biden in particular have expressed their approval for  Pope Francis’ messages calling for a multilateral approach to solving the climate crisis that responds to the urgency of the moment with a vision to protect future generations.

The president is acting quickly to reduce fossil fuel extraction, production and use. He immediately canceled the Keystone XL pipeline once again. Through an executive order, he has paused new fossil fuel extraction on public lands and review projects underway. This executive order will also cancel fossil fuel subsidies and U.S. financing of fossil fuel production abroad. As alternatives, he plans to scale up offshore wind power production and order agencies to procure “carbon pollution-free” vehicles and electricity that support “good paying jobs with the choice to join a union” for workers in the United States.

Echoing Pope Francis’s concern for the Amazon, Biden has placed an emphasis on protecting the Amazon to mitigate biodiversity loss and climate change through action by U.S. development agencies. However, President Biden’s plans for protecting the Amazon include the use of market-based mechanisms, or systems in which governments and the private sector can buy and sell carbon “credits” to stay within allotted carbon emissions targets. MOGC shares the concerns of Pope Francis about the use of carbon markets, as they can be abused by wealthy governments and private interests at the expense of impoverished communities that are most vulnerable to climate change. Emissions reductions from these projects can be difficult to measure as well.

President Biden plans to work closely with Congress on climate policy. Congress has signaled that it is considering using one of the two opportunities this year to pass a budget with a simple majority to establish policies to catalyze climate action, ranging from clean energy tax credits to infrastructure projects.

Congress is expected to use the normal budget process to fund international climate programs that help communities prevent and adapt to a changing climate, including through the Green Climate Fund (GCF). The GCF has been blocked from receiving funding first by the Republican-controlled Congress under Obama and again under President Trump. The GCF is the primary financial mechanism to serve the Paris Agreement.

Based on meetings with Congressional contacts, climate advocacy groups in MOGC’s network expect to see Congress introduce a number of bills to address aspects of climate change from an international lens, such as preventing illegal deforestation in the commodities supply chain, creating more support and protections for environmental and land rights defenders, and creating mechanisms for supporting climate migrants.

Biden has also committed to working on the intersections of climate and racial justice. For the first time, there will be African Americans in charge of the House Foreign Relations Committee and the appropriations subcommittee charged with approving budgets for foreign assistance. In these positions, Representatives Gregory Meeks and Barbara Lee have named climate change as a priority and expressed that they will prioritize racial equity within U.S. foreign policy. Climate change, racial and economic equity, and recovering from the global pandemic are the first key agenda items for the Biden administration and the Democratic-controlled Congress.

The Biden administration may not be able to deliver something as ambitious as the Green New Deal, especially with the razor thin Democratic majority in Congress, but the next two years offer the best opportunity yet for making real progress to tackle the climate crisis.