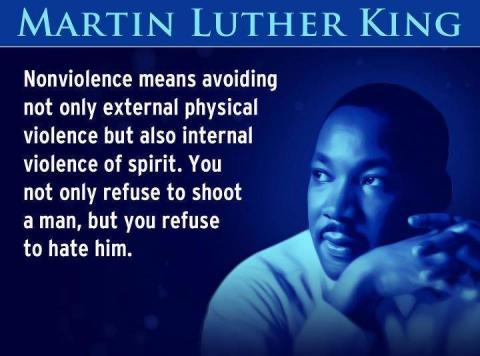 After violent clashes between white supremacists and counter-protesters at a “Unite the Right” rally in Charlottesville, Virginia, on August 12 left dozens injured and one woman, Heather Heyer, dead, there has been a much needed national discussion on racism, fascism and nonviolence. The following article was published in the September-October 2017 issue of NewsNotes.

One of the many notable observations after the violent white supremacist rally in Charlottesville was by Archbishop Charles Chaput of Philadelphia:

“Racism is a poison of the soul. It’s the ugly, original sin of our country, an illness that has never fully healed. Blending it with the Nazi salute, the relic of a regime that murdered millions, compounds the obscenity. Thus the wave of public anger about white nationalist events in Charlottesville this weekend is well warranted. We especially need to pray for those injured in the violence. But we need more than pious public statements. If our anger today is just another mental virus displaced tomorrow by the next distraction or outrage we find in the media, nothing will change. Charlottesville matters.”

Marie Dennis, co-president of Pax Christi International, and former director of this office, participated in an interfaith prayer service in Charlottesville, and echoed Archbishop Chaput’s urgency: “I believe those of us who live white privilege have to be attentive to our own racism, but we also have to be more visibly in the streets and engaged in dismantling racist structures in our society. Our statements of shock and solidarity are important but insufficient.”

The events in Charlottesville drew widespread international attention. The UN committee charged with monitoring racism (CERD) issued a rare ‘early warning’ to the United States over the failure of Trump administration to unequivocally denounce white supremacy after Charlottesville. Indeed, the rest of the world should be concerned. As disturbing as the violent events in Charlottesville last month were, they reflect a global trend seen by Maryknoll missioners of violent populism, ethnic and racial hatred, and Xenophobic nationalism.

A populist president in the Philippines encourages extrajudicial killings of mostly poor Filipinos accused of using or selling drugs, with over seven thousand deaths since his inauguration. Muslim Burmese, the Rohingya, are being forced out of their country in a genocidal campaign by some fundamentalist Buddhists. Thousands of children in Yemen are dying of malaria and starvation in a U.S.-supported military campaign led by Saudi Arabia, causing Yemen to compete with South Sudan for the title of worst humanitarian crisis since World War II.

“As we look around our beloved country we can see dark clouds gathering,” Cardinal Joseph Tobin of Newark told a global gathering of leaders of popular movements in Modesto, CA earlier this year. “Your work of building community and calling all of us to truly ‘see’ one another is needed now more than ever…[Those in power] demonize excluded groups—people who look, sound, or believe differently from the dominant group. This act of misdirection—channeling the anger of anxious people toward ‘the other’ rather than toward the architects of the economy of exclusion—is a classic tactic of a populist leader.”

Each of us is called to action, to get into the streets and to witness to the power of Gospel nonviolence—to stand in solidarity with our African-American, Jewish, and Muslim sisters and brothers, and to welcome our neighbors who are undocumented immigrants.

As Pope Francis told a gathering of popular movements in Bolivia in 2015: “The future of humanity does not lie solely in the hands of great leaders, the great powers and the elites. It is fundamentally in the hands of people and in their ability to organize.”

So what can we do?

First, show up. Find a local organization or church that is speaking out against racism and white supremacy, accompanying undocumented immigrants or promoting interreligious dialogue. All of us have something to contribute to the struggle for peace and justice.

Speak up. Write President Trump and Congress. Write a letter to the editor. Engage in dialogue with your neighbors, family and your church community.

Learn more. One of the many good things that have happened after the tragedy of Charlottesville are the positive actions and examples of creative nonviolence against neo-Nazis and violent white supremacists. Wagingnonviolence.org offers Kazu Haga’s excellent piece, “Don't feed the trolls - how to combat the alt right.” Catholic Nonviolence Initiative (CNI) has good resources; CNI’s own Maria Stephan is quoted in a New York Times article on the power of nonviolence entitled “How to Make Fun of Nazis.”

Finally, pray. The power of prayer is inestimable; but it’s often underrated in activist circles. Prayer unites us as a community of faith. The Conference of Major Superiors of Men recently passed an unanimous resolution entitled “Gospel Nonviolence: The Way of the Church” that, in calling for an embrace of active nonviolence by the Catholic Church, begins with a call to prayer.