Africa: Pope Francis and the Periphery 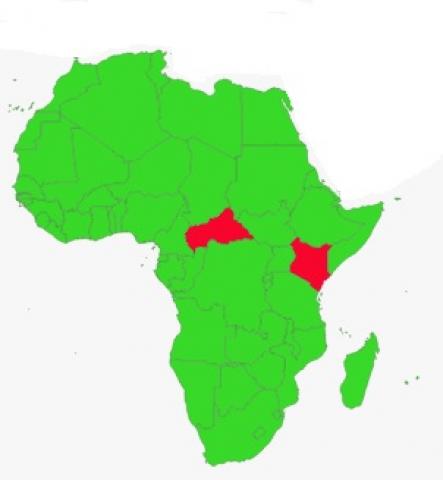 During his first visit to Africa, Pope Francis gave two important speeches to non-church groups that were remarkable in their global message about peace, poverty, and the environment. The following article was published in the January-February 2016 issue of NewsNotes.

Of the 19 speeches Pope Francis gave during his six-day visit to Africa, two were given to non-church groups. The first was to the staff of the UN Environmental Center in Nairobi, Kenya, and the second to a group of Muslims in a mosque in Bangui, Central African Republic (CAR). At both of these venues, the popular pope used the platform of a pastoral visit to address global issues from the perspective of those on the periphery and, by doing so, made the periphery the lens for viewing the global realities of climate change and violent conflict.

Just four days before the opening of the Paris Climate Summit, Francis’ speech at the UN Environmental Center echoed environmental concerns outlined in Laudato Si’. First came a call to safeguard the rich biodiverse lungs of our planet, which in Africa include the Congo Basin. Here, Francis linked African environmental movements with those in the Latin American region of the Amazon and called for support for “those international agencies and civil society organizations which draw public attention to these issues.”

A second concern centered on how to respond to the challenge of climate change. Here Francis linked Laudato Si’ with his statements made at the UN in which he said our response to the challenge of climate change “needs to incorporate a social perspective which takes into account the fundamental rights of the poor and the underprivileged” (L.S., 93) and “the misuse and destruction of the environment are also accompanied by a relentless process of exclusion.”(speech to the UN)

Francis then laid out his hope for the Paris Climate Summit: “[The] achievement of a global, transformational agreement based on the principles of solidarity, justice, equality and participation that target the three interrelated goals of lessening the impact of climate change, fighting poverty and ensuring respect for human dignity.” For this vision to become a reality a new “culture of care” must emerge that includes care for oneself, care for others, and care for the environment.

Two other concerns unfolded in Francis’ wide-ranging speech: urbanization and international criminal trafficking. Again, Francis laid out a vision of what should be strived for as urban populations in Africa explode. Urban slum dwellers should have the basic rights of land, lodging and labor – realities that escape many in the crowded Kangemi area of Nairobi where Francis made a visit and spoke freely with young people whom he urged to avoid the lures of drug trafficking and crime. To the well-heeled elites at the UN Environmental Center Francis stated a clear challenge: “We cannot be silent about forms of illegal trafficking which arise in situations of poverty and in turn lead to greater poverty and exclusion.”

The final stop of Francis’ Africa tour was Bangui, the capital of CAR. While geographically this former French colony sits in the heart of Africa, most would have trouble finding it on a map, and many wondered why the pope insisted on visiting this war-torn nation. Once again, the deeper purpose of his visit came to light: to make the concerns of those who are excluded and marginalized a focal point for the global Church.

In the Catholic cathedral, Francis urged his followers to become “practitioners of forgiveness, specialists in reconciliation, experts in mercy,” no small task in a nation locked in bitter inter-religious conflict. His appeal “to all those who make unjust use of the weapons of this world, I make this appeal: lay down these instruments of death!” was met with a roar of approval.

The next day at Bangui’s Koudoukou mosque, Francis spoke to the Muslim community, greeting them as friends and standing with them in prayer directed towards Mecca. He went out of his way to link his pastoral visit to the larger task of interreligious encounter that is so needed in CAR. He then told the audience that he considers Muslims and Christians to be brothers, and that brotherhood has “consequences in how we consider ourselves and conduct ourselves.” As he has done throughout the world, Francis also called for a refusal of hatred, revenge and violence, especially violence perpetrated in the name of a religion or of God.

Finally, Francis praised both Muslims and Christians for playing an important role in re-establishing harmony among all citizens of CAR and reminded them of the many acts of solidarity they had shown to their fellow citizens by welcoming them and defending them during this latest crisis. A few weeks later in northeast Kenya this bold religious solidarity was on display. When a bus was attacked by Al Shabaab militants and Muslim passengers were told to separate themselves from non-Muslims, they refused to do so and even went so far as sharing their religious garb with non-Muslims so they would not be identified easily