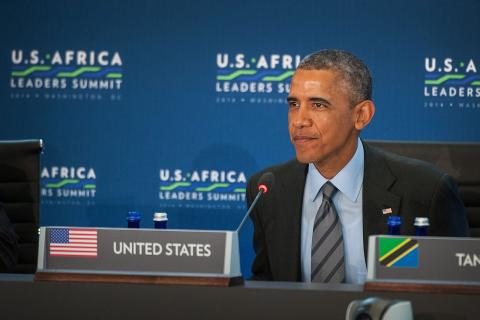 The folowing piece was published in the September-October 2015 NewsNotes.

In the past two years Africa has become a high-profile concern for the United States. The Obama administration has broadened its engagement with African nations to include not only security and humanitarian concerns but also economic partnerships with several governments through the continent. In addition to three official visits, President Obama also hosted the U.S.-Africa Leaders’ Summit in Washington in August 2014.

President Obama visited Kenya and Ethiopia, probably for the last time as head of state, from July 24-28. Both Washington and Nairobi held many expectations about the trip’s purpose and possible outcomes. In recent years, the Obama administration has tried to carry out a set of policies aimed at promoting democracy and human rights in Africa, as well as various programs focused on food security, health assistance, energy development and investment in Africa’s steadily growing economies. These political, humanitarian and economic policies have sometimes played second fiddle to security and anti-terrorism concerns.

Commentators in the U.S. suggested that the journey could be an opportunity to rebuild frayed relationships with two important allies in East Africa that had been neglected during Obama’s first six years in office due to Ethiopia’s human rights violations and, in Kenya’s case, concerns over the International Criminal Court’s (ICC) indictment of President Uhuru Kenyatta and Vice President William Ruto for crimes against humanity. In March 2015, when the ICC withdrew charges against Kenyatta, little reason remained not to visit Kenya.

Some analysts suggested that Obama’s visit would serve to build on the commitments of last year’s Leaders’ Summit and would take advantage of growing business possibilities, especially in the rapidly expanding Kenyan economy. Others suggested that the visit would emphasize the importance of developing improved security and anti-terrorism programs by promoting the Kenyan government’s attempts to reform its corrupt security establishment. One commentator even went so far as to suggest that the president should look for opportunities to send U.S. troops with combat experience to help build up African military capability.

Upon arrival in Nairobi, the first Kenyan-American president (who is also the first sitting U.S. president to visit) received a warm welcome. A primary reason for visiting was to participate in the sixth annual Global Entrepreneurship Summit, a gathering of entrepreneurs at all stages of business development. President Obama’s remarks highlighted a theme often evoked during his short stay – that by leapfrogging old technologies, Africa could enter into a new time of prosperity. But he also spoke bluntly to his hosts, openly criticizing Kenya for its corruption (noting that it is believed that 250,000 jobs have been lost in Kenya due to bribery), tribalism, and lack of adequate educational programs for women and girls. He didn’t lecture his hosts but pointed out that corruption, once rampant in his adopted home town of Chicago, was driven out once ordinary people stood up against it.

During his time in Addis Ababa, Obama gave a major speech to the Africa Union, the first U.S. president to do so. In a lengthy address to dignitaries he summarized what it would take to bolster the progress Africa has made in recent years: “New thinking. Unleashing growth that creates opportunity. Promoting development that lifts all people out of poverty. Supporting democracy that gives citizens their say. Advancing the security and justice that delivers peace. Respecting the human rights of all people. These are the keys to progress.”

In commenting on what Africa should look for from President Obama’s visit, a prominent Nairobi think tank had suggested that the Kenyan government should lobby the U.S. about finding more pragmatic solutions to conflicts in the neighboring countries of South Sudan and Somalia. In his Addis Ababa address, President Obama stated that he had just met with South Sudan’s President Salva Kiir and opposition leader Riek Machar; on August 26, in the presence of Kenya’s President Kenyatta and other East African leaders, both men signed the much-delayed Intergovernmental Authority on Development (IGAD)-Plus peace accord that establishes a transitional government for the fragile young nation.