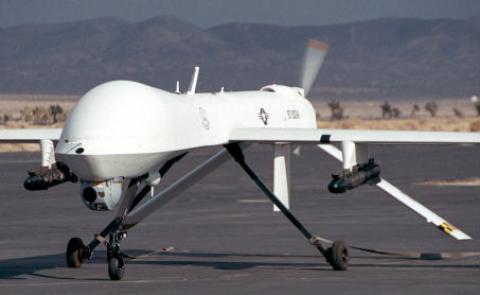 Grave moral and legal questions have been raised by the Obama administration’s use of lethal drones in Afghanistan, Pakistan, Iraq, Yemen, Libya and Somalia and by concerns that they will soon be used elsewhere in Africa for targeted assassinations on what amounts to a battlefield without boundaries. In mid-January, 33 organizations, including the Maryknoll Office for Global Concerns, wrote to President Obama to express alarm at reports that his administration was seeking a new "Authorization for use of military force in certain African countries" in order to use lethal drones in Mali and elsewhere if necessary. The following article was written by Marie Dennis.

To execute people without due process or an opportunity to surrender violates the moral and legal sensibilities of people who believe in the value of every human life and the importance of due process. Likely violations of sovereignty; attacking weak targets far from a known battlefield; "signature strikes" aimed at a pattern of behavior rather than at specific individuals; and the practice of categorizing as militants all military-age males in a strike zone when counting civilian casualties have outraged people of conscience around the world. Furthermore, the use of drones in armed conflict, because they are relatively low in cost and exact few military casualties, will likely accelerate the move to war and military intervention in crisis situations.

The letter to the president expressed particular concern about the potential for expanded use of lethal drones for targeting militants in African countries. President Obama recently announced that about 100 U.S. troops have been deployed to the West African country of Niger, where defense officials said they are setting up a drone base to spy on al-Qaeda fighters in the Sahara. Washington Post reporter Craig Whitlock has published several stories, including on February 15, 2013, tracking the growth of U.S. military presence in Africa. He has reported on the establishment of "a network of small staging bases," including drone installations in Ethiopia, the Seychelles, and now Niger, as well as a forward operating base for special operations forces in Kenya and a permanent base in Djibouti, "which serves as a hub for counterterrorism missions in Somalia and Yemen."

In their letter to President Obama, the 33 faith-based, human rights and other organizations wrote, "Given recent reports of the U.S. Africa Command’s expanding training programs and the nature of current U.S. military activity on the African continent, we recognize that additional operations would likely rely on significant military and counterterror assistance to and cooperation with partner governments and security forces. In Mali and Nigeria, vast human rights abuses have been committed by national security forces. In places such as Uganda and Ethiopia, oppressive governments continue to attack the civil and political rights of citizens. While the U.S. iterates its support for African democratic movements and efforts to achieve long-term stability, direct partnership with security forces and political leaders undermining those initiatives makes such claims ring hollow – and they will only continue to do so as these partnerships increase….

"The causes and conditions of militant extremism are complex worldwide, and military solutions are as unlikely to address them in Africa as they have been after more than 10 years in Afghanistan. Your administration now has an opportunity to shift the policies that have led to these unconscionable costs, and we urge you to instead emphasize support for Africans working toward non-lethal solutions and long-term stability as you move forward."