10 Things to Know About Current Crisis in Haiti 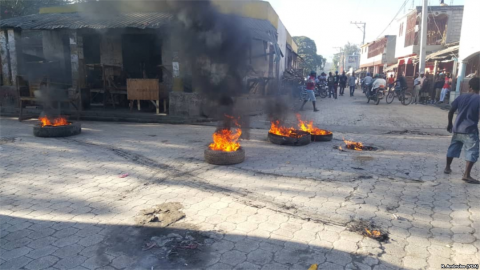 Since February 7, protests have erupted across Haiti over allegedly misappropriated government funds and a massive devaluation of the Haitian currency, the gourde. Renate Schneider, a Maryknoll Affiliate from Chicago, is in Haiti where she serves as president of Haitian Connection, a non-profit that focuses on health and education needs in the impoverished country. Schneider recommended the following summary of the current crisis written by The Haiti Collective and  posted on Facebook on February 15, 2019.

1. The instability began with a failed electoral process and fragile transitionary government back in 2015/2016 as the president was elected with less than 20 percent turnout.

Fast forward to July 2018, a nationwide protests across Haiti ensued against the PetroCaribe corruption scandal with Venezuelan oil money appropriated for Haiti. The end of Venezuelan oil has contributed to a fuel crisis which only worsened with exclusive contracts with companies who refuse to deliver new shipments when Haiti cannot pay their outstanding debts to the tune of $35 million.

2. Protests have been off and on throughout Haiti since July, but they escalated to another level on February 7.

This is now the 9th day of what has been called “Operation Lock Down Haiti” – the goal of which is to shut down all aspects of Haitian life – political, social, economic, educational, and even medical.

3. The majority of the protestors are between the ages of 18 and 25.

[For this age group] unemployment is over 80 percent. [They] largely supported and believed the promises of the current political party in power – PHTK (which has largely been backed by the international community). Jovenal Moise, a banana farmer, was hand-picked by his predecessor and former president, Michel Martelly.

4. Here’s a sampling of the things that have happened over the last 8 days:

Most primary roads in and out of cities have been barricaded with boulders or burning tires, littered with rocks which have been thrown at vehicles; several gas stations have been looted; HQ for Haiti National Television was set on fire with many cars burned; 78 prisons escaped Aquin prison in south Haiti; journalists have been pressured and attacked, leaving one wounded with a gunshot to his hand; a one former police commissioner and wanted fugitive attempted to make his way into the national palace before being arrested by PNH.

6. The Haitian Gourde (HTG), which had already been depreciated to $1 USD = 65 gourde dropped dramatically to $1 USD = 87 gourde within a week.

[This crippled] the purchasing power of the already devastated poor. Everyone is sheltered and virtually in “lock down” with each passing day become a battle of the wills – the will of the people vs. the will of the government in who will outlast who. Extreme scarcity of food and water has Haitians protestors out with rocks in pans, exclaiming how tired they are of being hungry and needing help.

7. Many foreign workers and American mission teams have been evacuated via helicopter to the airport as roads are impassible.

While helicopter evacuations are extremely expensive, they are nonetheless in great demand. Still several are stranded, unable to evacuate from their current location.

8. Hospitals and emergency services have struggled to stay in operation as they are short on supplies.

Not only are basic necessities scarcely available, so are basic social and humanitarian services which are critical in times like this.

9. [On Feb. 14], President Moise spoke for the first time since the start of Operation Lock Down.

He claimed support of the international community while appealing to the opposition parties to dialogue with him. He made it clear he will not resign and hand over control of the country to what he considers gangs and drug lords. Haitian Prime Minister Ceant refuses to resign or take responsibility for what has happened, though President Moise puts the finger of blame squarely on him.

10. In the aftermath of President Moise’s speech to the Haitian people, increased demonstrations and outbursts of violence are expected.

Within an hour, the United States changed its travel advisory to Level 4: Do Not Travel, the highest travel advisory. The US government recognizes its limitations and inability to secure the safety and welfare of its citizens who enter into Haiti under such conditions.

Please continue to pray for Haiti.

Photo: On Feb. 11, 2019, a flaming barricade in Port au Prince, Haiti, where protesters are decrying impossible living conditions, corruption and demanding the president resign. Photo by Voice of America/Public Domain.